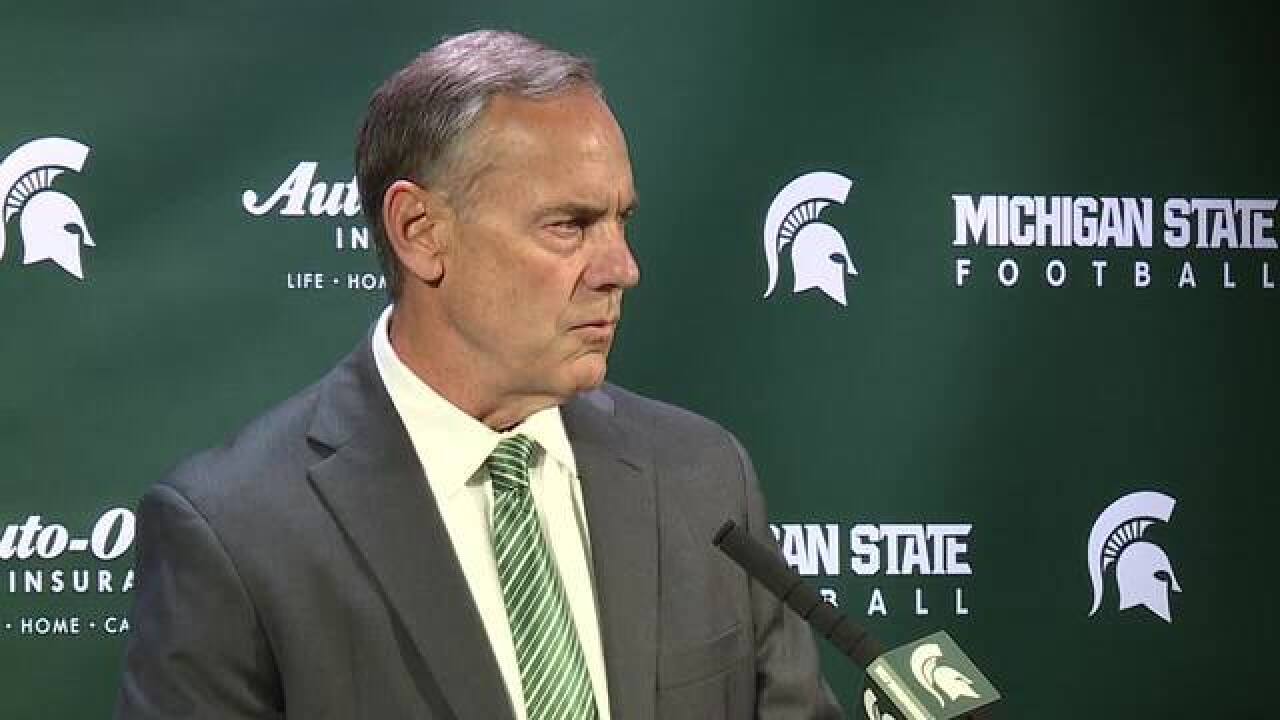 The external investigation report into the sexual assault allegations in the Michigan State University football program was released to the public on Monday afternoon.

"In both instances, we found that senior leaders within the football program and the Department of Intercollegiate Athletics (Athletic Department) complied with the RVSM (Relationship Violence and Sexual Misconduct) policy by promptly and accurately reporting the information they learned about the underlying incidents to departments within the University that are tasked with investigating and responding to such incidents," the report found.

Shortly before the report was released, both Dantonio and Hollis addressed the Board of Trustees, who expressed a "vote of confidence" for both of them, as well as President Lou Anna Simon.

"We also found no evidence that senior leaders within the football program or athletic department attempted to impede, cover up, or obstruct the Office of Institutional Equity's (OIE) investigation into underlying incidents," the report added.

It all started in February when the program announced it was suspending three players and a staff member during a sexual assault probe. They were recently charged in that case with sexual assault while the staffer has not been charged.

A football player, meeting with Dantonio for their scheduled weekly meeting, became emotional and reported the assault to him.

"I had to get her out of there. She is my friend," the reporting player told Dantonio, according to the Jones Day report. Despite not saying a sexual assault occurred, Dantonio suspected the player was a witness and reported the incident, the report says.

After the player began reporting the incident to Dantonio, he stopped him to immediately contact OIE.

That's when, the report says, a series of phone calls and text messages were exchanged between Dantonio, another football staffer and OIE Director Ande Durojaiye.

According to the report, on Jan. 9, just a week before the alleged sexual assault, Dantonio asked Durojaiye, to give a presentation about sexual misconduct and relationship violence to the team.

According to the Jones Day report, the leadership in the football and athletic department reported the information they knew to the OIE which is responsible for the university's compliance with federal and state laws for sexual assault.

The report found that the staffer, Curtis Blackwell, did violate the university's policy for his handling of the sexual assault allegations.

According to the report, there was evidence the Blackwell learned about the January sexual assault from the same player who reported it to Dantonio.

"This staff member subsequently spoke with the three players allegedly involved in the January 2017 incident in order to determine what had occurred, communicated with a parent of one of those players regarding the incident, and failed to report any information he learned to OIE or MSU PD.

The Ingham County Prosecutor's Office said they are not going to press charges against Blackwell.

In March, Dantonio spoke to the media for the first time since the sexual assault investigation, saying football isn't "important enough to talk about.

"These are obviously difficult times, but it's an opportunity to re-center ourselves as a program, as people, and take direction from myself or anybody else in that capacity and move forward," Dantonio said at the press conference.

Nearly a month after Dantonio spoke, a Michigan State football player was charged in a separate sexual assault investigation.

Auston Robertson, 19, was charged with third-degree criminal sexual conduct on April 21. He's accused of forcing a woman to have sex with him at her apartment on April 8. Robertson was arrested two days later.

"The criminal sexual conduct charges announced today against Auston Robertson are of the most serious nature. Sexual assault has no place in our community. While there is an ongoing criminal process, we’re extremely disappointed that Auston put himself in this position. He is no longer a member of our football program," Dantonio said in a statement.

According to the report, another player contacted Dantonio to report that a woman he knew was raped. After reporting the incident to the Michigan State Police Department, the report says that Dantonio contacted the OIE to tell them what he learned.

In that incident, the report found "Dantonio again took prompt and appropriate action upon learning from one of his players that another football player may have committed sexual assault.

"Finally, Dantonio avoided investigating the matter or inserting himself into any investigation by OIE, and he did nothing to interfere with or obstruct the subsequent investigation," the report added.

Read the entire report below

Mumphery was accused of sexually assaulting a student in her dorm room in March 2015, according to the Free Press. He had finished his season with the Spartans at the time of the alleged assault.

According to the Free Press, there were no charges pressed against Mumphery because the case could not be proven beyond a reasonable doubt. There was also conflicting reports about who was the aggressor and if it was consensual, the Free Press reports.

He was playing for the Houston Texans when the report came down last week, but according to the Houston Chronicle, he was released from the team on Friday.

"Dantonio's prompt reports to University authorities (OIE and/or MSU PD), coupled with the extensive training the football program does on the RVSM policy, demonstrated his commitment to comply with the University's policies regarding sexual misconduct," the report said.