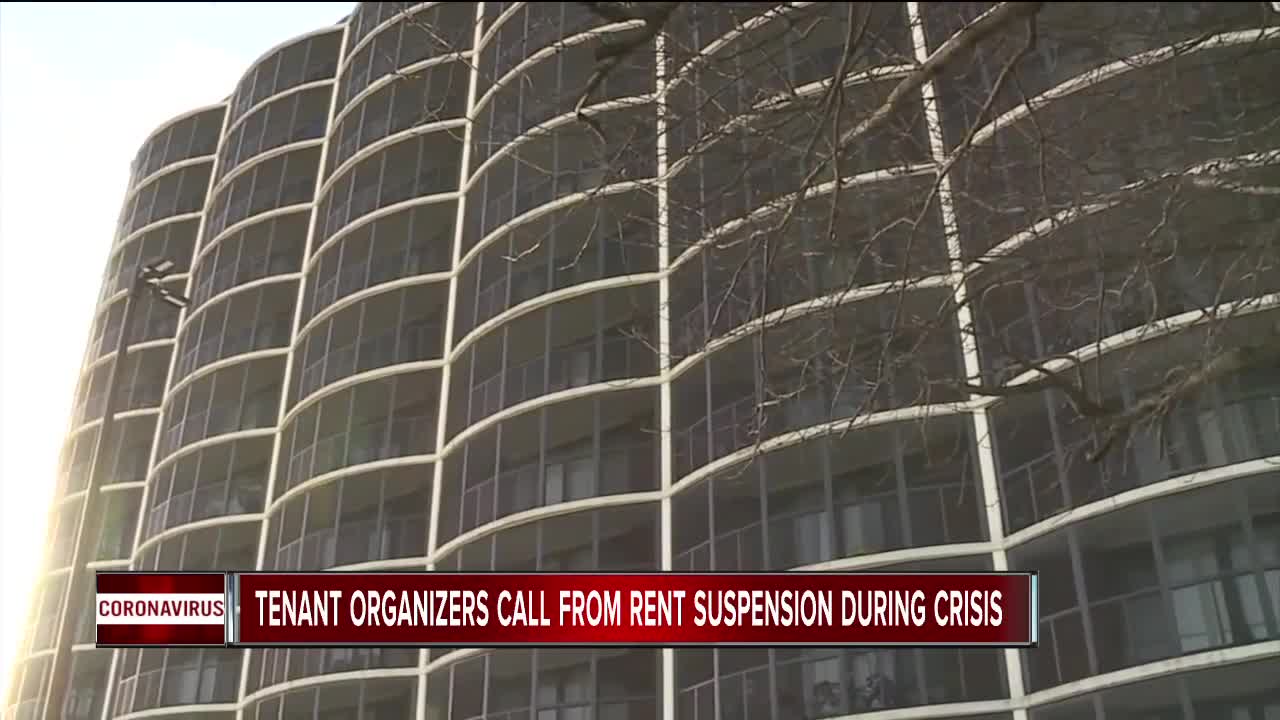 A tenant organizer group is calling for a rent suspension during the COVID-19 pandemic.

(WXYZ) — A coalition of tenant organizers are warning of an impending rental crisis across the state, asking Gov. Gretchen Whitmer to take action now and enact a suspension on rent for the remainder of the COVID-19 pandemic.

"There’s federal legislation that allows people with federally backed mortgages to have a bit of a break right now," said Rachael Baker, an organizer with Detroit Renter City. "Renters, like mortgage holders, need a break."

Baker's organization has joined forces with Lansing Tenants Union, No Rent Michigan, The Grand Rapids Mutual Aid Network, and the Greater Kalamazoo-area Tenants Union to submit, Monday, a petition calling for an extension of the governor's eviction moratorium, as well as a suspension rent and utility shut-offs.

"Restricting people’s ability to work restricts their ability to pay their rent," said Baker, who points out that 30% of the state's residents are renters, and in Detroit the number comes closer to 60%.

"We want legislation in place that recognizes that people can’t make their rent now and it doesn’t mean they’re going to be able to make their rent on May 15," she continued.

In March Gov. Whitmer issued a moratorium on evictions. This was extended on April 17; the day it was set to expire. It's now set to end on May 15.

Joe McGuire, an attorney with the Detroit Justice Center, said the legal service world is bracing right now for a "tsunami" of evictions as soon as the moratorium is lifted.

"We have a spike in unemployment that’s pretty much unheard of, and what naturally will follow is that people will have a lot of trouble making their rent and mortgage payments," said McGuire.

Already some landlords have been gearing up. On April 16, the office of Michigan Attorney General Dana Nessel issued a reiteration of the governor's eviction moratorium, after being alerted that tenants at the Jeffersonian in Detroit had been issued "Demand for Possession" letters. Sent by landlords prior to filing eviction notices, Demand for Possession letters tell tenants that if they don't pay rent within seven-days they must vacate the premise.

"The plain language of your client’s demand violates EO 2020-19 in that it requires a tenant to leave their home in the absence of payment," the AG's letter stated, explaining that landlord can ask for rent during this period of emergency, they just cannot come with the threat of displacement.

The letter, according to McGuire, sends a notice to landlords that they cannot begin eviction proceedings while the moratorium is in place. But, he continued, it also just pushes the problem down the line. Back-rent will eventually be owed. People will still be struggling financially.

"The eviction moratorium is a band-aid,” he said. "It’s a necessary band-aid but it’s not sufficient to address the problem in the long terms."

"If the economic numbers we’re seeing are accurate," he continued, "there are going to be a lot of people who are not able to pay rent in the next few months and that’s not going away."

A recent survey completed by University of Michigan’s Population Studies Center found that 35% of Detroiters employed full-time or part-time before March 1 lost their jobs as a result of the pandemic.

Digging into housing data, the report found renters to be a particularly vulnerable demographic.

"One thing that the pandemic does is it entrenches and probably widens existing economic inequality and lines of disparity," said Jeff Morenoff, the Director of U of M's Population Studies Center, who spearheaded the report.

Of the survey’s various findings, Morenoff points to one particularly surprising fact: While most respondents reported a decrease in spending as a result of the pandemic, renters saw an increase. He’s unsure what caused this discrepancy, but suspects it may be due to the fact that renters are more likely to typically live paycheck-to-paycheck. The crisis is forcing many to suddenly have to stock up and buy ahead in a way they normally would not.

"Regardless of the reason," he said, "people who are renting are experiencing more of a liquidity crunch right now. They’re having to spend more money, and at the same time they’re more likely to feel very unstable about their situation."

The financial consequences of the pandemic, he explained, are going to be with us for a long time.

"It’s unlikely that stimulus checks are going to get into the hands of everyone who needs them," he said, "and even if they do, they’re still going to be a in a very precarious position."

This economic insecurity — with an unknown end-date — is what Detroit Renter City is hoping to get ahead of.

“I, for now, am OK," said Tristan Taylor, a member of the group. "The question is, with how unstable and uncertain things are: how long any of us will be OK?”

Taylor, who works at Avalon Cafe and Bakery, has been out of work for over a month now. He was encouraged to apply for unemployment.

While the 36-year-old was able to pay rent this month — he leases from a friend and has, what he calls, a "good deal" — it’s the future that worries him.

"We can’t expect poor people to bear the brunt of this pandemic. And that’s what we say, and that’s what we expect, when we fail to come up with a policy that suspends rent and make people responsible for things that we just know that they won’t be able to recover from," he said. "We really can’t be OK with a situation where tens of thousands of people are going to be made homeless, because that’s exactly what’s going to happen."

As for landlords, Baker suggested the state — or local municipalities — use forthcoming federal stimulus dollars to create a Landlord Recovery Fund.

"Any kind of response that would adequately address the rental crisis that we’re about to see happen with mass evictions could be much more easily taken care of if the group of people that became the case load was the smaller group of people which," she said, "is landlords."

In Detroit, where the city is currently trying to beef up enforcement around rentals but relies on landlords to self-report and register themselves, Baker said this could be a useful tool to create a landlord registry.

The immediate focus, however, is codifying rules now that support tenants during the unknown, but rocky future.

"This is new to everyone, but the way that pandemics operate is they come in ebbs and flows," she said, explaining that stay-at-home orders will likely occur again. When they do, she continued, the goal is for protections to already be in place so that "tenants are not sitting at home having to wring their hands, having to count whatever amount of money that they have left, or hoping that there is another opportunity for stimulus checks so that they’re not evicted."

The group submitted the petition this afternoon, it had over 1,000 signatures. They are spearheading a "phone-zap" Tuesday, ringing the governor’s office all day hoping to get their issue heard.