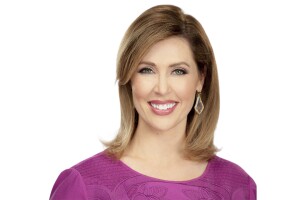 Alicia is proud to be the weekday co-anchor of 7 Action News This Morning from 4:30 a.m. - 7:00 a.m. She joined WXYZ in January 2007 as an anchor/reporter/multi-media journalist and is a cheerleader of Channel 7's #earlyrisers on twitter and facebook.

"People always ask me what time I wake up. Right now, my first alarm goes off around 1:35 in the morning," Alicia chuckled. "And, yes, I sometimes hit the snooze button."

Alicia is a three-time Emmy winner who has been recognized for both her anchoring and her reporting.

In June of 2010, she was awarded an Emmy for Best On-Air Talent from the Michigan Chapter of the National Academy of Television Arts and Sciences.

She has also earned two Emmy Awards for her reporting. In March 2007, Alicia hit the streets of Wayne County at night to reveal a prostitution rehabilitation program that’s turning around lives… one woman at a time. The eye-opening special report earned her an Emmy Award for covering societal concerns.

During her time as anchor/reporter at WWMT in Kalamazoo/Grand Rapids, Alicia produced a special series featuring two missing Michigan children’s cold cases. Her work won her another Emmy Award for reporting. In addition, a series of reports entitled "Facing Racism: A Daily Battle" received a Michigan Association of Broadcasters Merit Award for Community Involvement.

Alicia is currently producing and reporting "Call For Action" stories which air Thursdays in the 5:00 p.m. newscast. These segments feature consumer problems or issues that are resolved with help from the all-volunteer Call For Action team based at WXYZ.

"I admit that I'm far from the most skilled worker on any Habitat site, but I'm pleased to have the opportunity to spread the news about how Habitat is rebuilding lives through new, affordable housing for families in need," explained Alicia.

That volunteering experience inspired her to come up with the annual Detroit 2020-Habitat for Humanity Detroit "BuildUp." This year marks the third year of this wall-building effort and partnership with Habitat.

Another important cause for Alicia is fighting breast cancer. She participates in the Susan G. Komen Race for the Cure every year with a team of co-workers.

“Some of my relatives and dearest friends have battled breast cancer. So this race has special meaning for me as it does for so many people," said Alicia.

The animal lover is also involved with the Michigan Humane Society. Alicia has been captain of Channel 7’s Mega March for Animals team every year since 2007. Hosting the annual Valentine's Day telethon benefitting MHS has also been a thrill for Alicia.

From reporting live at the site of the World Trade Center for the 9/11 Anniversary in 2002 to helping cover Hurricane Jeanne as it roared onto Florida’s coast, Alicia has appreciated every opportunity to tell compelling stories throughout her career.

Alicia considers herself a "Midwestern-Southern Belle."

She was born in Milwaukee, Wisconsin -- the daughter of a teacher and a chemical engineer. Her father's work prompted the family to move around the country. She graduated from high school in Brunswick, Georgia.

She is also a graduate of the University of Georgia where she studied at UGA’s Henry W. Grady College of Journalism and Mass Communication. She majored in Broadcast News and minored in Political Science while also being involved in a variety of campus activities and philanthropies. Before graduating Alicia was honored by the Young Alumni Council for the University of Georgia Alumni Society as the Senior Female of the Year.

If you have any story ideas or questions for Alicia, email her at asmith@wxyz.com.