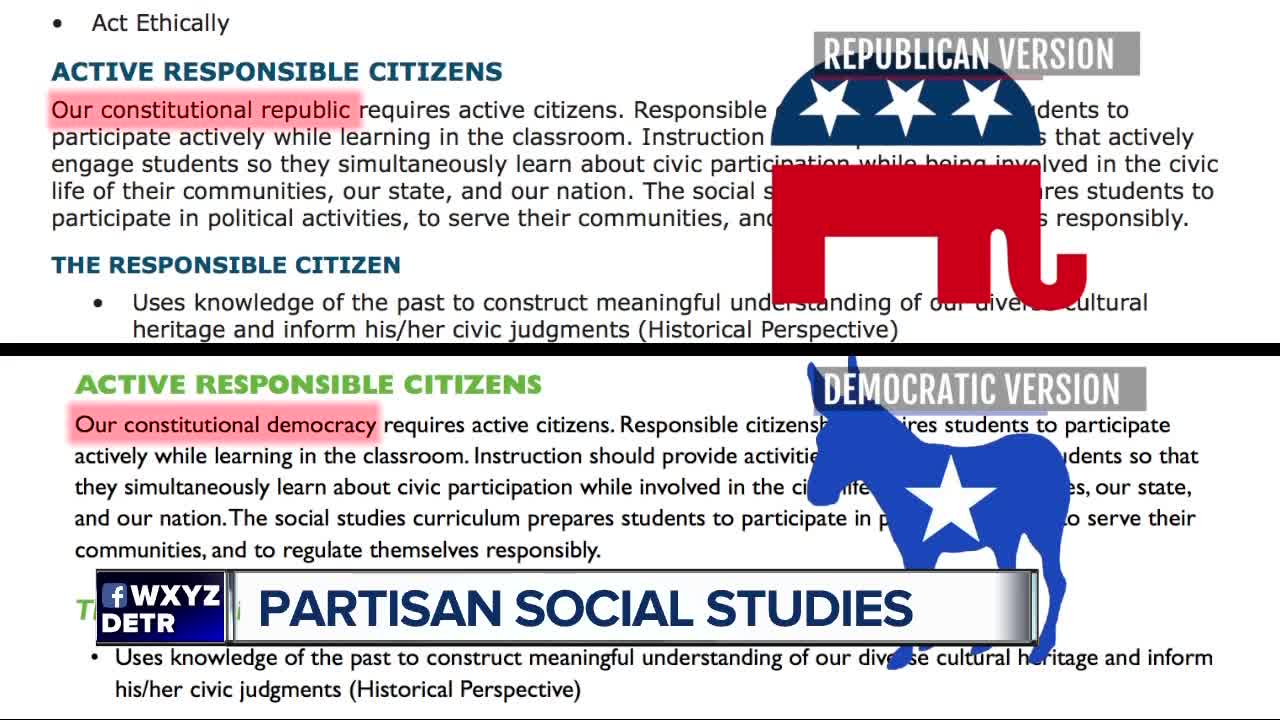 In Paul Schmid’s Social Studies classroom at Novi High School, he asks students to think critically about how decisions in history would play out, and then he explains what happened.

LANSING, Mich. (WXYZ) — In Paul Schmid’s Social Studies classroom at Novi High School, he asks students to think critically about how decisions in history would play out, and then he explains what happened.

“We want to help the kids to navigate a confusing world. My job is to help these students make well educated and informed decisions,” explains Schmid.

He says his class is about critical thinking, not partisan indoctrination.

“I am always disappointed when any school curriculum becomes politicized,” he said.

That is his message for all members of the state board of education. For five years, the board has been working on new Social Studies Standards. Get this, Republicans and Democrats can’t even agree on what to call our government.

Are we a Constitutional Republic? Or a Democracy? Last year Republicans replaced in places the word "democracy" with "republic."

“I know the Democrats were freaking out,” said Tom McMillin, a board member.

Then in November 2018, voters elected a majority of Democrats to the board. Now a new draft is being considered.

“The debate really isn’t about whether we are a republic or a democracy. The country can be a republic but also operate as a representative democracy. And there is nothing wrong with saying either of these things,” said Casandra Ulbrich, a Democrat who is now board president.

“It is biased in a very left leaning way, and I find that problematic,” McMillin said of the 2019 draft social studies standards.

McMillin is one of only two Republicans on the school board now. He says he has numerous concerns bigger than what we call our government.

He says the new standards teach what climate change is, but don’t call for the questioning of it.

“It needs to be clear how often settled science is not settled,” said Mcmillin. “Omitting the second amendment,” he continued. “Omitting Ronald Reagan when you talk about the end of the Cold War. How can you do that?”

So does that mean your children won’t learn the that we have a right to bear arms if the new standards are approved?

“I don’t think the standards are left. You have to understand the difference between standards and curriculum,” counters Ulbrich.

Ulbrich says she believes teachers would include Ronald Reagan in any curriculum on the end of the cold war. She says she had a big problem with last year's standards for teaching civil rights. The standards Republicans drafted in 2018 called for looking at how when a group gets new civil rights, another group loses rights. McMillin is upset that was taken out.

“Talk about gay rights, but also talk about how if a Christian business owner doesn’t participate in a gay wedding, they will lose their business,” said McMillin.

“Civil rights is not a zero sum game,” said Ulbrich. “That is not how it works, so for that to be a standard is completely inappropriate.”

Right now the public is being given a chance to voice opinions on the 2019 draft social studies standards. You can do that online or at a scheduled meeting. You can more information here.