China raises tariffs on $60B of US goods in technology fight 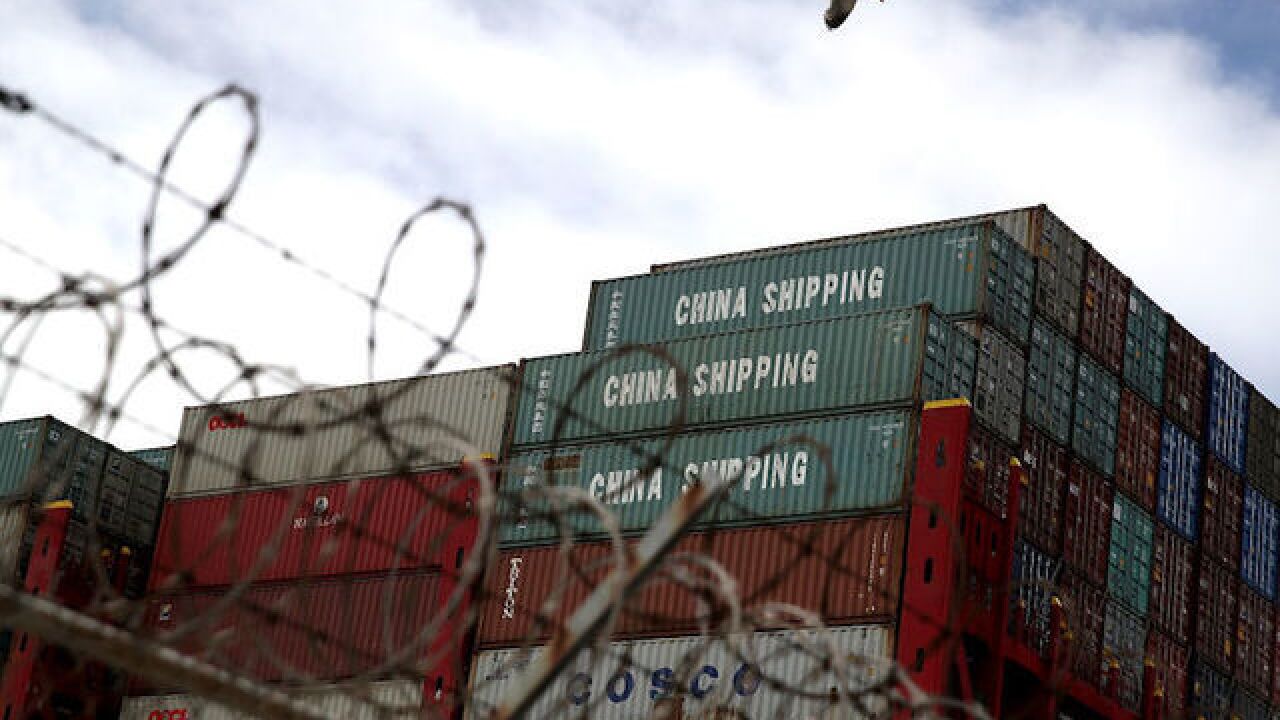 Copyright 2018 Scripps Media, Inc. All rights reserved. This material may not be published, broadcast, rewritten, or redistributed.
Justin Sullivan
OAKLAND, CA - JUNE 20: Shipping containers sit on the the Hong Kong based CSCL East China Sea container ship at the Port of Oakland on June 20, 2018 in Oakland, California. U.S. president Donald Trump has threatened to impose 10 percent tariffs on $200 billion of Chinese imports if China retaliated against his previous tariffs on $50 billion of Chinese imports. (Photo by Justin Sullivan/Getty Images)

China on Tuesday announced a tariff hike on $60 billion of U.S. products in response to President Donald Trump's latest duty increase in a dispute over Beijing's technology policy.

The announcement followed a warning by an American business group that a "downward spiral" in their conflict appeared certain following Trump's penalties on $200 billion of Chinese goods.

The Finance Ministry said it was going ahead with plans announced in August for the increases of 10 percent and 5 percent on 5,207 types of U.S. goods. A list released last month included coffee, honey and industrial chemicals.

The increase is aimed at curbing "trade friction" and the "unilateralism and protectionism of the United States," the ministry said on its website. It appealed for "pragmatic dialogue" to "jointly safeguard the principle of free trade and the multilateral trading system."

The Trump administration announced the tariffs on some 5,000 Chinese-made goods will start at 10 percent, beginning Monday. They are to rise to 25 percent on Jan. 1.

A Commerce Ministry statement earlier said Trump's increase "brings new uncertainty to the consultations" but there was no word on whether Beijing would back out of talks proposed last week by Washington.

The United States complains Chinese industry development plans including "Made in China 2025," which calls for creating global champions in robotics and other fields, are based on stolen technology, violate Beijing's market-opening commitments and might erode American industrial leadership.

American companies and trading partners including the European Union and Japan have longstanding complaints about Chinese market barriers and industrial policy. But they object to Trump's tactics and warn the dispute could chill global economic growth and undermine international trade regulation.

The American Chamber of Commerce in China warned Washington is underestimating Beijing's determination to fight back.

"The downward spiral that we have previously warned about now seems certain to materialize," the chamber chairman, William Zarit, said in a statement.

Trump imposed 25 percent duties on $50 billion of Chinese products in July. Beijing retaliated with similar penalties on the same amount of American goods.

The U.S. duties targeted Chinese goods Washington says have benefited from improper industrial policies. Beijing's penalties hit soybeans and other farm goods from states that voted for Trump in 2016.

Trump threatened Monday to add a further $267 billion in Chinese imports to the target list if China retaliates for the latest U.S. duties. That would raise the total affected by U.S. penalties to $517 billion — covering nearly everything China sells the United States.

"Contrary to views in Washington, China can — and will — dig its heels in and we are not optimistic about the prospect for a resolution in the short term," said Zarit of the American Chamber of Commerce. "No one will emerge victorious from this counter-productive cycle."

The chamber appealed to both governments for "results-oriented negotiations."

As Beijing runs out of U.S. goods for retaliation, American companies say regulators are starting to disrupt their operations.

Last week, the American Chambers of Commerce in China and in Shanghai reported 52 percent of more than 430 companies that responded to a survey said they have faced slower customs clearance and increased inspections and bureaucratic procedures.

The U.S. government withdrew some items from its preliminary list of $200 billion in Chinese imports to be taxed, including child-safety products such as bicycle helmets. And in a victory for Apple Inc., the administration removed smart watches and some other consumer electronics products.

"China has had many opportunities to fully address our concerns," Trump said in a statement. "I urge China's leaders to take swift action to end their country's unfair trade practices."

In May, in fact, it looked briefly as if Treasury Secretary Steven Mnuchin and Chinese Vice Premier Liu He had brokered a truce built around a Chinese offer to buy enough American farm products and liquefied natural gas to put a dent in the trade deficit. But Trump quickly backed away from the truce.

In the first two rounds of tariffs, the Trump administration took care to try to spare American consumers from the direct impact of the import taxes. The tariffs focused on industrial products, not on things Americans buy at the mall or via Amazon.

By expanding the list to $200 billion of Chinese products, Trump may spread the pain to ordinary households. The administration is targeting a bewildering variety of goods — from sockeye salmon to baseball gloves to bamboo mats — forcing U.S. companies to scramble for suppliers outside China, absorb the import taxes or pass along the cost to their customers.

Sohn said the Trump administration is pursuing a legitimate goal of getting China to stop violating international trade rules but that it should have enlisted support from other trading partners, such as the European Union, Canada and Mexico, and presented Beijing with a united front.

Trump has strained relations with potential allies including the European Union, Canada and Mexico by raising tariffs on imported steel and aluminum. He demanded Canada and Mexico renegotiate the North American Free Trade Agreement to make it more favorable to the United States.