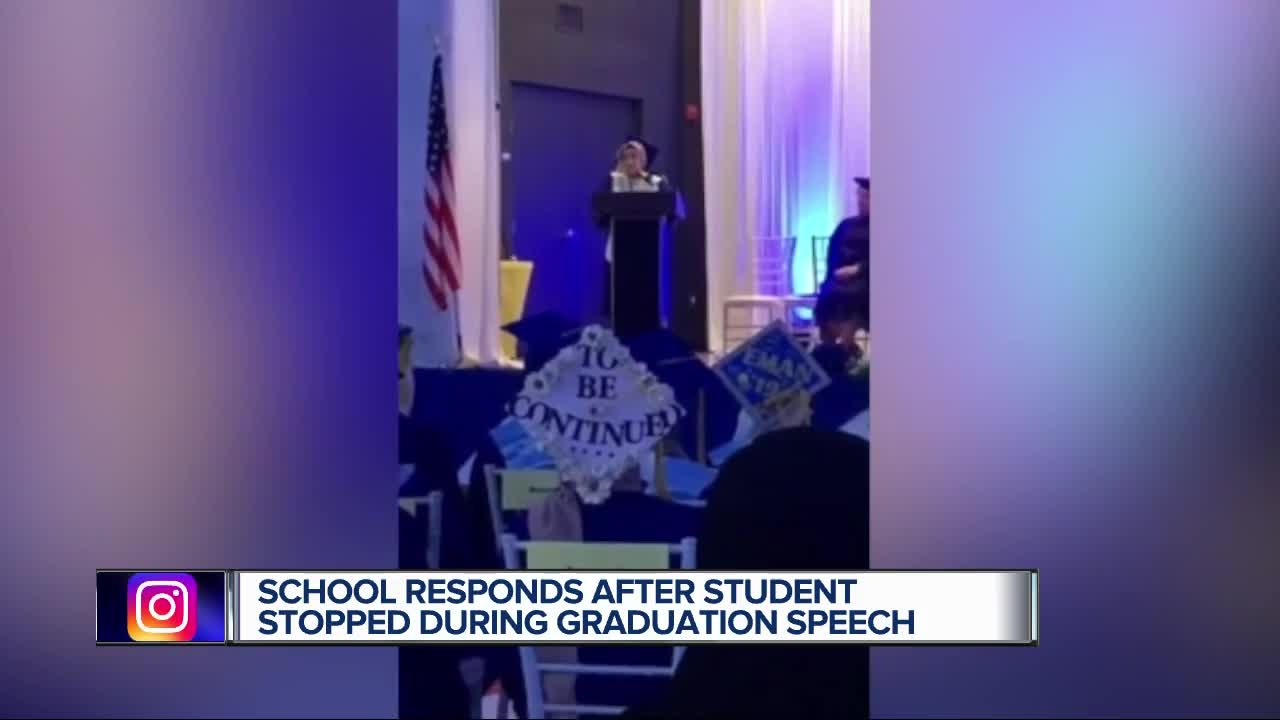 Posted by a former teacher, a viral video shows the moment a student speaker criticized the charter school at a commencement speech, and how the school took action immediately after.

DETROIT (WXYZ) — Posted by a former teacher, a viral video shows the moment a student speaker criticized the charter school at a commencement speech, and how the school took action immediately after.

Taking her speech in a direction some didn’t expect, graduating senior Tuhfa Kasem was direct in calling out the institution for allegedly not supporting a quality education, using the best resources or putting students and staff needs ahead of the bottom line.

Soon after beginning her speech, she was unable to finish as planned due to her microphone being cut off.

“They tried to silence me because they didn’t like the message” says Kasem.

Since the recent event, the Universal Academy in SW Detroit has publicly responded. They defend their reputation pointing to successes such as most students going on to higher learning, and millions of dollars in total college scholarships collected.

In part of a statement to us, they also say “A few disgruntled adults have attempted to sully the academy’s honorable achievements... some of our students were misled and used to serve agendas that have nothing to do with what really serves their interests... the negative statements at the graduation ceremony are unfounded.”

While a round of teachers were let go several years back and some have kept in touch with their former students, Tuhfa insists her words were the truth. “I’m going to WSU next year, so they can’t stop me from being honest and representing my class” says Tuhfa.

FULL STATEMENT FROM SCHOOL BELOW:

At Universal Academy, we are privileged to be able to provide our students with high quality education. We teach civic participation and strongly encourage our students to participate in our democracy.

The Academy and its stakeholders are quite proud of the number of students who are continuing their education at 4-year colleges and universities, as well as the high honors our students have achieved. For example, 44 of the 52 graduating students have been awarded $18,019,821 in total scholarships. Most students at our Academy go on to higher education and honors.

We celebrate all of our students and, as in the past years, and in school districts statewide, the honor of speaking as valedictorian is a hallowed tradition in the school setting – one that can engender hurt feelings and controversy, no matter who is chosen. Rather than celebrating the success of our students who worked hard to achieve the status of valedictorian and salutatorian, the 2019 graduation event created controversy unlike any previous event. A few disgruntled adults have attempted to sully the Academy’s honorable achievements and the graduation celebration to cause controversy to serve their own agendas which have nothing to do with the students’ best interests.The student speech that was reported in negative media coverage, was merely the result of the work of those adults to accomplish their goals. We are so sad to see that some of our students were misled and used to serve agendas that have nothing to do with what really serves their interests.

Having said that, the negative statements at the graduation ceremony are unfounded. We will continue to work hard for our students and will remain focused on their best interests. We are proud of all of our graduates and would like to wish them the best of luck in their pursuit of their college and career goals. We are confident in their abilities and the opportunities that lay ahead of them.