'It’s definitely making it difficult for us.' Rainy forecast raising concerns as officials talk next steps in I-696 chemical cleanup 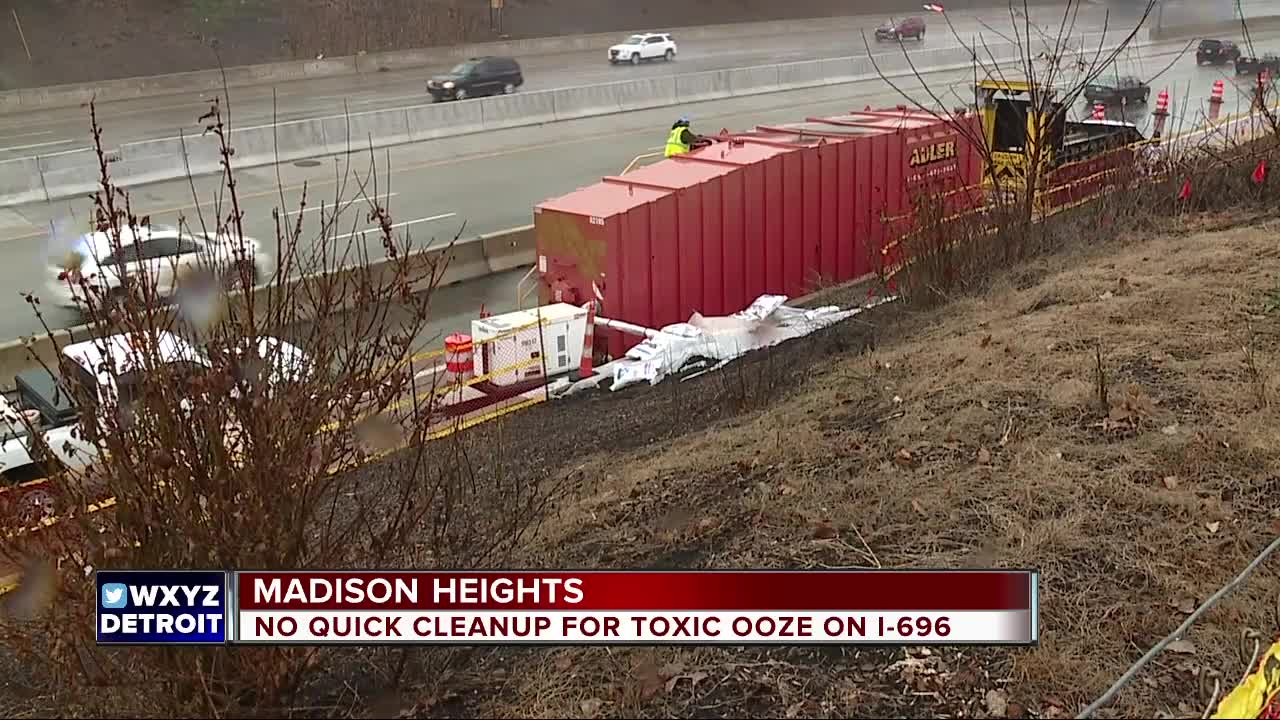 Crews are battling the rain to prevent the spread of hazardous waste in metro Detroit. 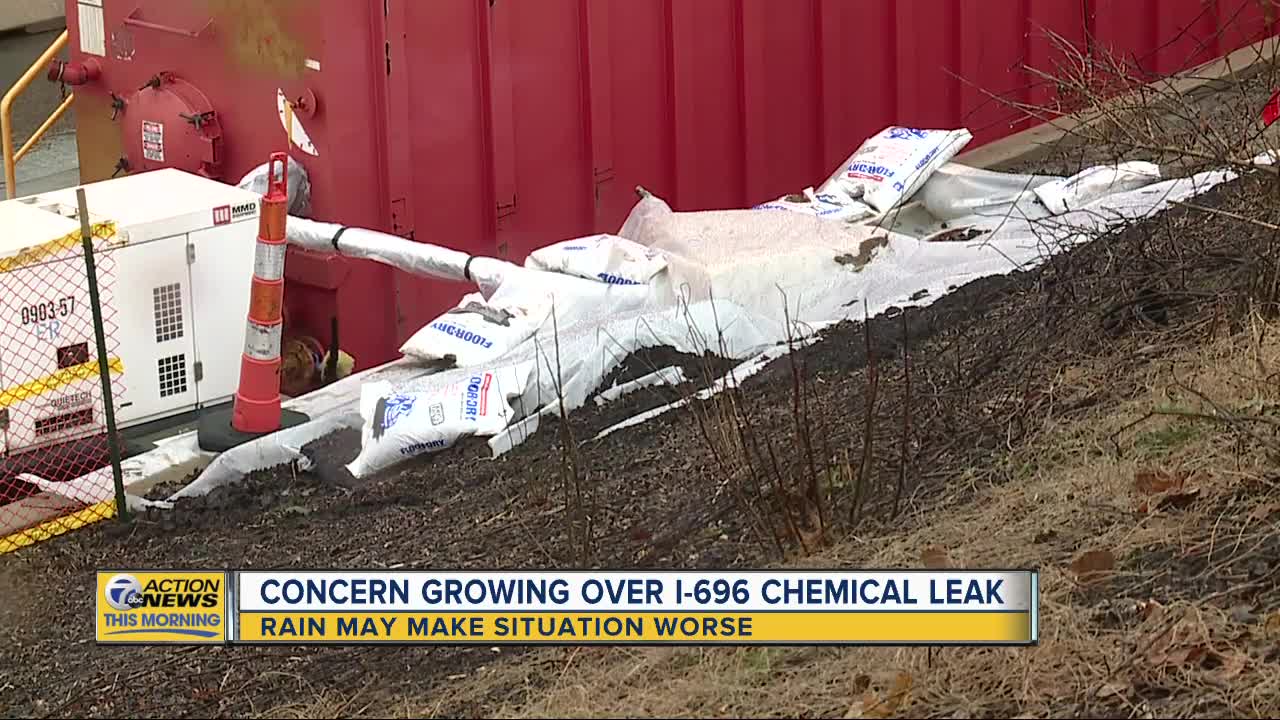 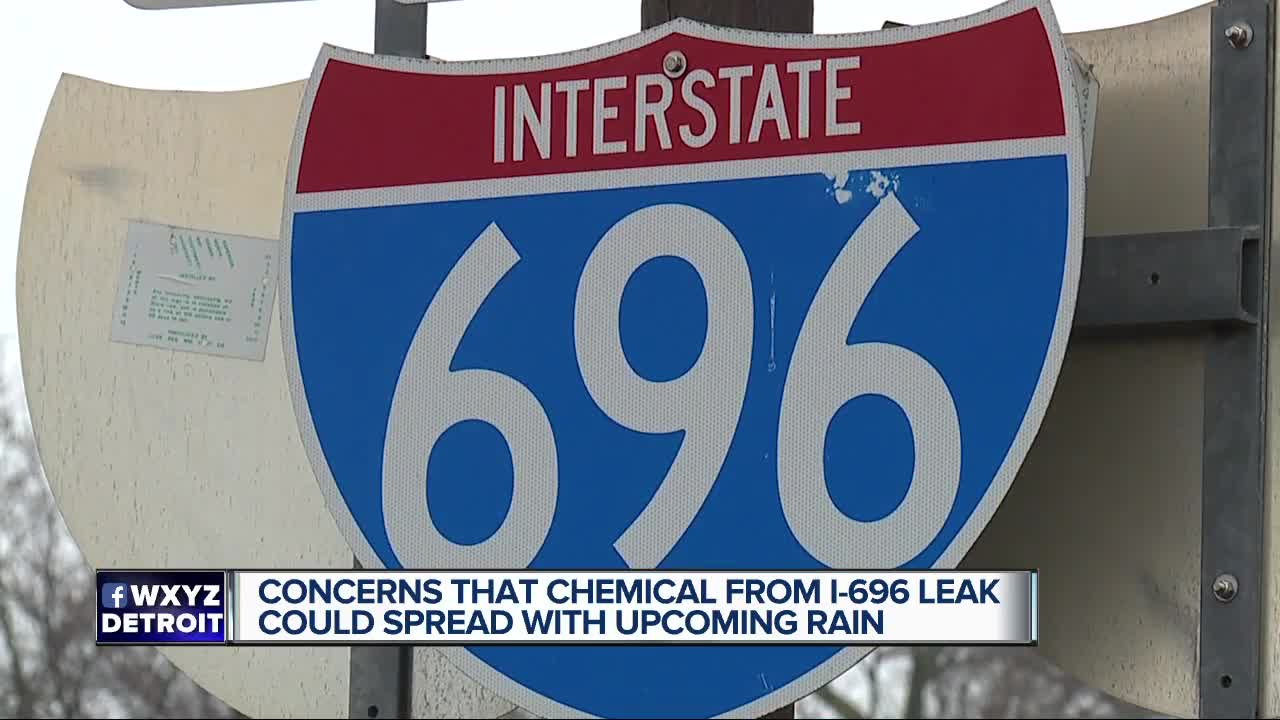 MADISON HEIGHTS, Mich. (WXYZ) — Crews are battling the rain to prevent the spread of hazardous waste in metro Detroit.

The bright green liquid seen seeping onto I-696 last week was confirmed to be the cancer causing chemical hexavalent chromium. It's coming from a business called Electro Plating Services on 10 Mile Road, which was shut down in December 2016 due to EPA violations.

Groundwater experts say rain can speed up the rate at which chemicals move through the soil and into ground water. Rain will also wash any chemicals from streets into storm sewers.

Coming up: the dangers rain presents to in this hazardous waste cleanup (green ooze) in Madison Heights @wxyzdetroit pic.twitter.com/mbxCPe6Y6Q

The U.S. EPA emergency response team is working with Michigan's EGLE around the clock to prevent that from happening, despite heavy rainfall.

"It’s definitely making it difficult for us," said Tricia Edwards.

It’s a battle against the rain and EPA ‘s emergency response on-scene coordinator Tricia Edwards is determined to win.

"We have been pumping the storm drains every single day since we’ve come," says Edwards, but in this rain they'd never be able to keep up.

Now her crews are focused on preventing the rain from washing chemicals onto the road so poisoned water doesn’t reach the storm drains and ultimately our lakes.

"And we’ve even gone so far as sealing up the joints between the concrete walls so that it’s staying behind the barrier wall and it’s able to filter over to our sump," Edwards said.

Hay bales are being used to help insulate the lines that run from the sump pump in the basement into the large container holding the contaminated water. @EPA Says keeping the water flowing is essential to preventing freezing and continuing the clean up @wxyzdetroit @MichiganEGLE pic.twitter.com/m8zSMEfb3B

The sump pump on the freeway embankment is protected by tarp so it can continuously pull water and moisture from the ground. The aim is to suck up the rain before it can run off and spread hexavalent chromium any further.

"This is a serious situation. We’re monitoring the site aggressively and we’re taking measures to prevent further movement of this liquid," says Jill Greenburg with Michigan's Department of Environment, Great Lakes and Energy aka EGLE (formerly MDEQ).

At Electro Plating Services, the original source of the hexavalent chromium, another sump pump has been placed in what used to be a pit filled with the toxic chemical.

"We have dug into the clay layer and the ground water is filtering into that pump," Edwards said.

That pump is also continuously running to prevent rain and ground water from flowing away from the origin of the contamination.

"So that is how we are trying to manage the ground water around the site to bring it into the building and then pump it into the tank," Edwards said.

U.S. EPA crews have been preparing for the cold weather by insulating the water lines and sump pump, keeping the water flowing will help prevent freezing. Bays of hail, pipes and tarps are being used as additional barriers against the weather.