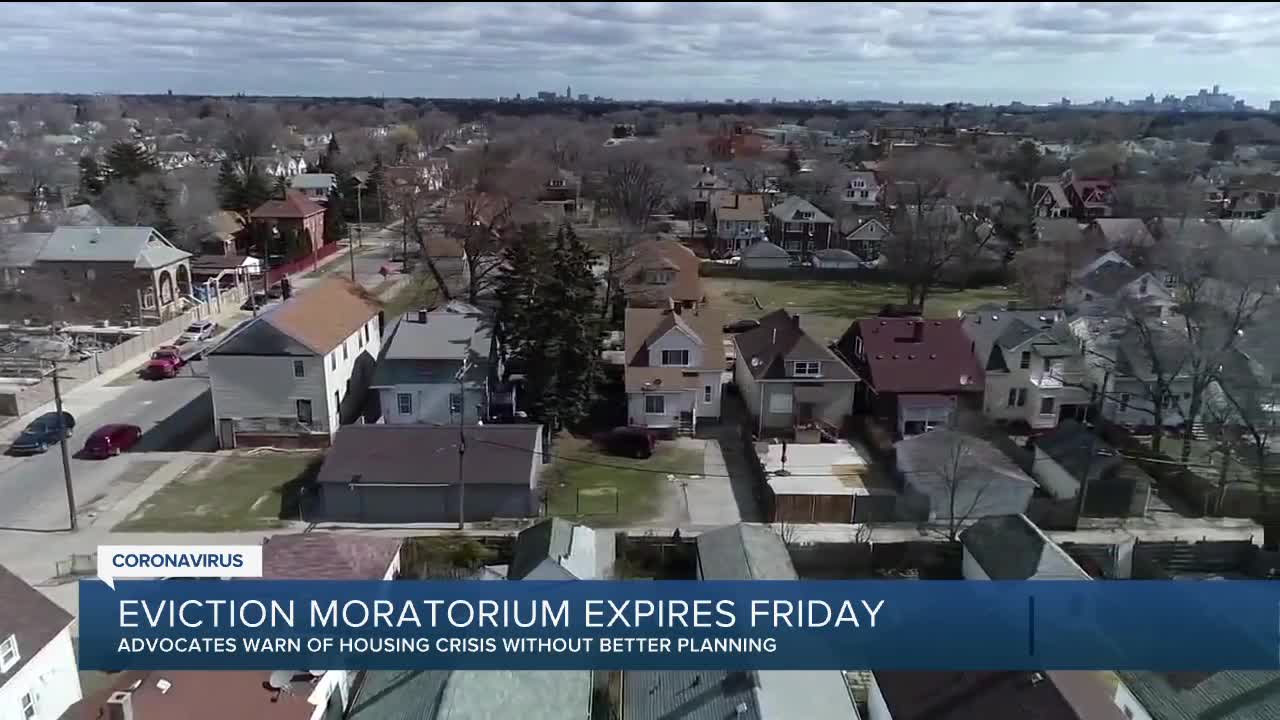 Governor Gretchen Whitmer's eviction moratorium is set to expire Friday, and housing advocates are raising a red flag, calling this week for another extension, as well as a more comprehensive and long-term plan that will provide relief to tenants, as well as mortgage holders.

Governor Gretchen Whitmer's eviction moratorium is set to expire Friday, and housing advocates are raising a red flag, calling this week for another extension, as well as a more comprehensive and long-term plan that will provide relief to tenants, as well as mortgage holders.

"I don’t think anyone wants Detroit to head into a new housing crisis and when you look at the unemployment numbers that’s exactly what’s going to happen if we don’t act now," said Joe McGuire, an attorney with the Detroit Justice Center who helped organize a protest Wednesday with Detroit Eviction Defense to draw attention to the mounting emergency.

In March Gov. Whitmer issued a moratorium on evictions, which she extended in April — on the day it was set to expire. That new moratorium is currently set to expire Friday. When 7 Action News reached out to the governor's office Wednesday to find out if there were plans for an extension we were told there was no change to the current termination date if May 15.

"Protecting our most vulnerable during this pandemic is certainly a priority. At this time, I don’t have an update to share outside of the current EO that is in effect," Tiffany Brown, a spokesperson for the governor wrote in an email.

This piecemeal, last-minute approach is the crux of the frustration of housing advocates, and a foundation for yesterday's protest. McGuire and other advocates called on the governor to extend the eviction moratorium for at least 60 days after the current Emergency Order ends on May 28, and institute a new moratorium on foreclosures.

"You’re not really preventing evictions by instituting these short-term moratoriums," said McGuire, adding that constantly shifting deadlines make it more difficult for tenants and housing attorneys to plan around the crisis.

"If people are forced out of their homes, or lose ownership of their homes to foreclosure and then the federal government passes a new relief package that would have helped it will be too late for them," he continued, pointing to other parts of the country that are making efforts to extend eviction and foreclosure moratoriums as they determine how to best help tenants and landlords during this crisis.

While 36th District Court in Detroit has independently stated that it won't start taking on eviction cases, or execute already-entered evictions, until after May 28, the lack of uniformity across the state — as well as a constantly shifting timeline — has created panic for those in the housing arena.

"If someone is thinking they’re going to be evicted on Friday they got to be on pins and needles, they got to be looking at taking anything they can," he continued, explaining that this desperation can typically result in tenants OK dangerous and dilapidated living conditions.

"People move into abandoned houses and all sorts of things," he said.

According to Phillips UCHC began tracking pending eviction cases from February 1 to March 13 — right before the shelter-in-place order when into effect —  and found 2600 judgments and over 450 signed writs. As soon as the moratorium is lifted these are, he said, a go.

"All those that haven’t been executed by March 13 — the 463 — are subject to immediate eviction," he said. "The bailiffs don’t have anything more that they need to get from them."

While this group of "pre-COVID cases" has been Phillip’s main focus — they’re the first to risk displacement — he and others know hundreds more are coming once the moratorium is lifted and back rent is owed.

"There are literally hundreds of people that are in the balance here," he said.

Earlier this month housing advocates, hoping to get ahead of the impending mass-displacement, submitted a petition to Gov. Whitmer calling for an extension of the eviction moratorium but also a rent suspension during the crisis. The group says it has seen no action since.

Yesterday's event was an attempt to make some additional noise. And also raise the alarm about a situation the state — and specifically Detroit — has already seen before.

"In the case of Detroit, the last crisis essentially laid the groundwork for this crisis that is to come," said Joshua Akers, an assistant professor of Geography and Urban Regional Studies at the University of Michigan-Dearborn. "Those people who have already been pushed out once and experienced the trauma of trying to rebuild their lives in these ways are now on the front lines to be pushed out again."

According to Akers the mortgage crisis of 2008 and the ongoing tax foreclosure crisis has transitioned Detroit into a renter-first market. A fact that makes the city’s residents — and its housing market — particularly fragile.

"We see these dual pressures. So one: people can’t pay rent. Two: landlords can’t pay mortgages," said Akers, adding that the end result is a vicious cycle that without proper interventions can have grave consequences.