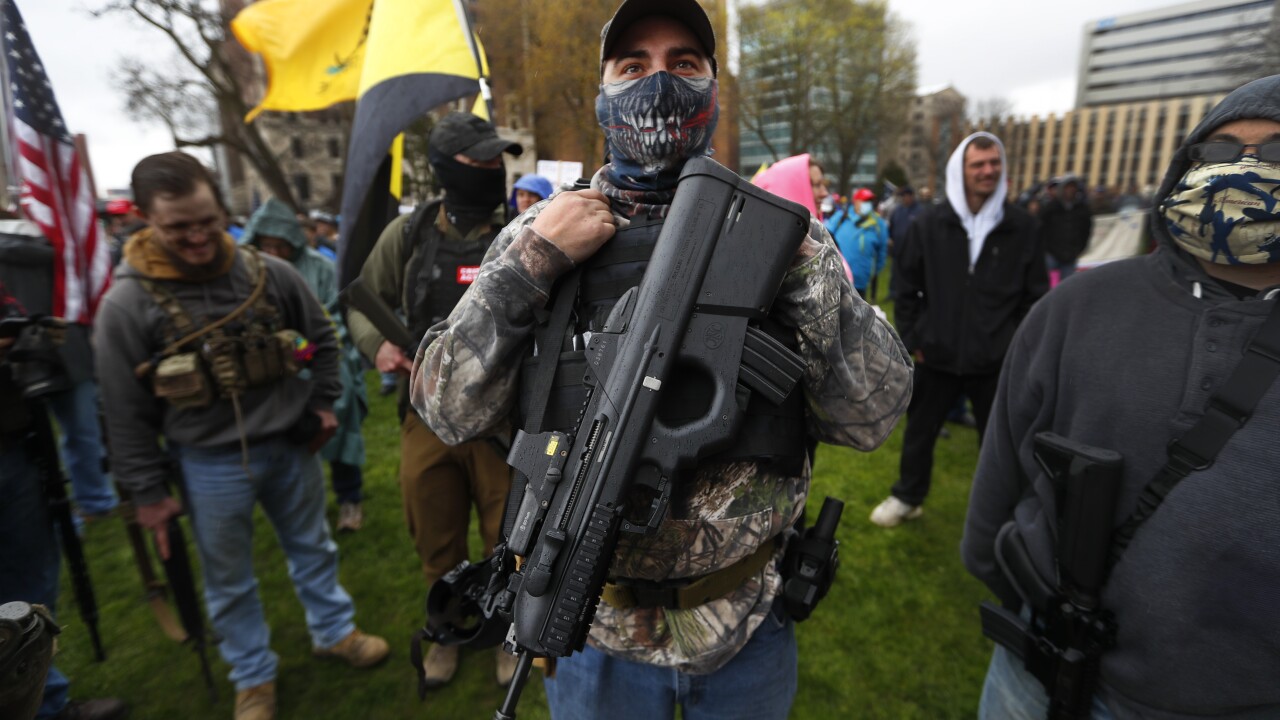 Paul Sancya/AP
A protester carries his rifle at the State Capitol in Lansing, Mich., Thursday, April 30, 2020. Hoisting American flags and handmade signs, protesters returned to the state Capitol to denounce Gov. Gretchen Whitmer's stay-home order and business restrictions due to the coronavirus pandemic while lawmakers met to consider extending her emergency declaration hours before it expires. (AP Photo/Paul Sancya) 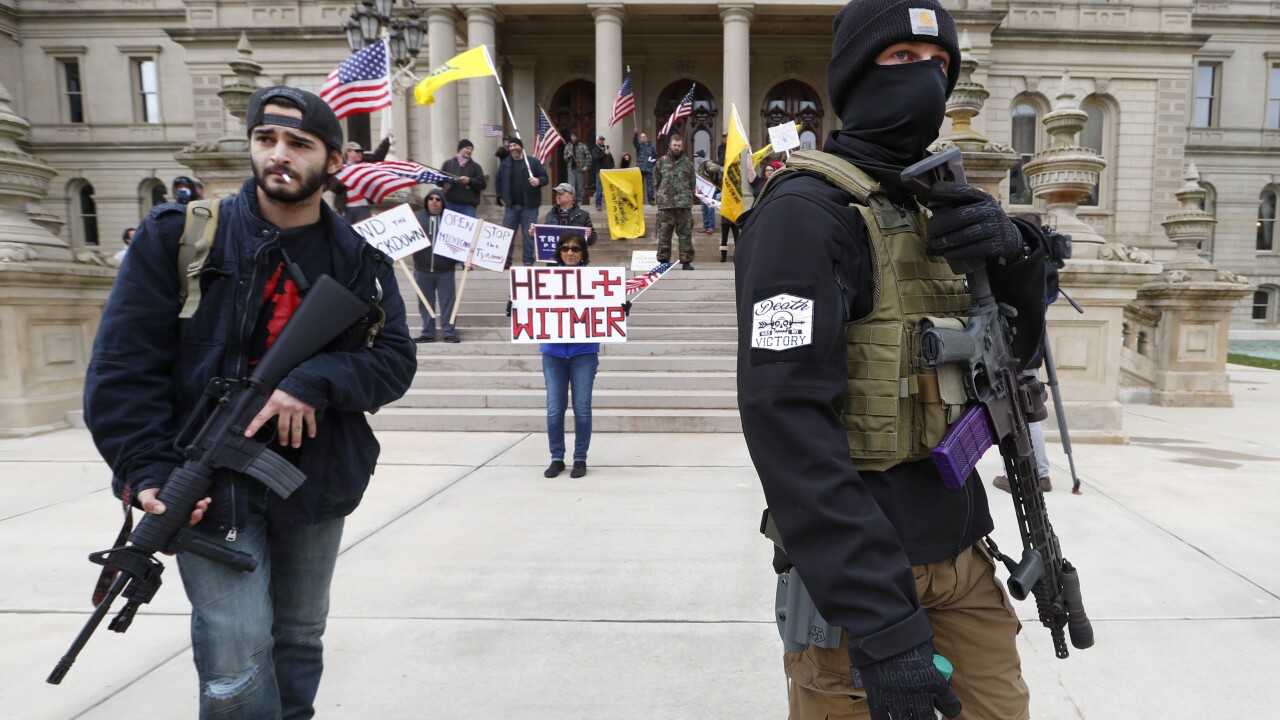 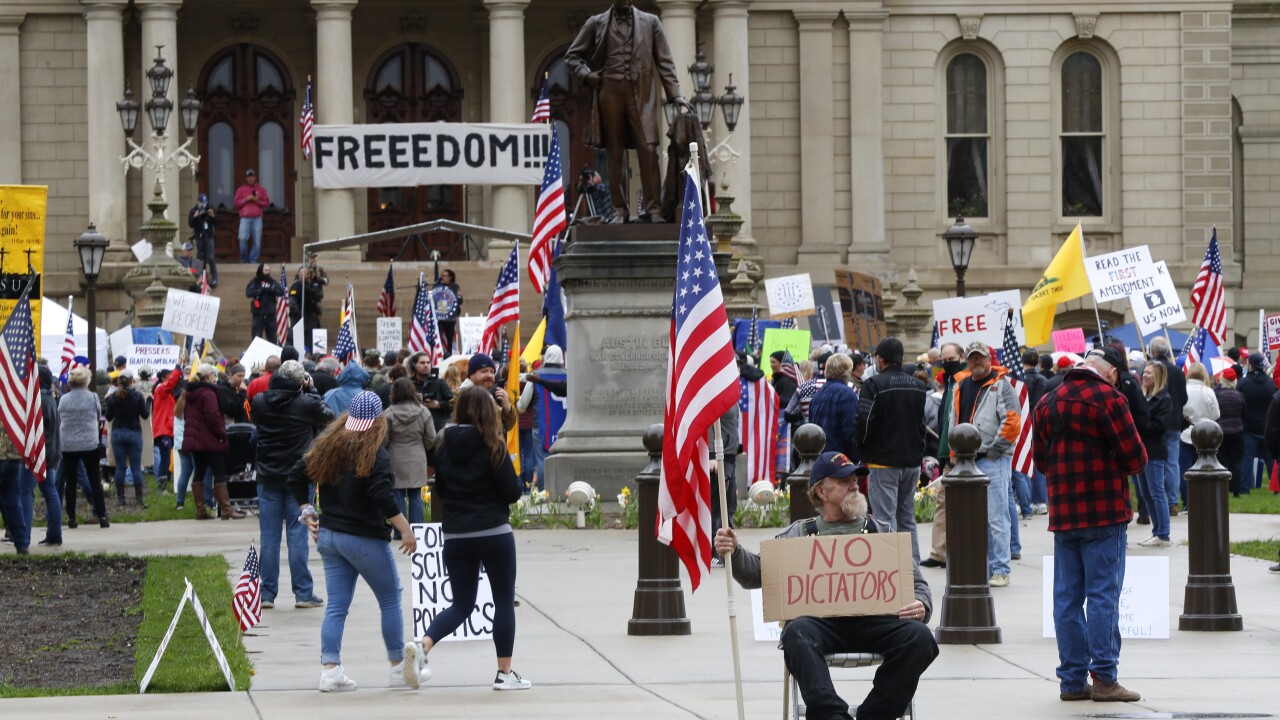 Gun-carrying protesters have been a common sight at some demonstrations calling for coronavirus-related restrictions to be lifted. But an armed militia’s involvement in an angry protest in the Michigan statehouse Thursday marked an escalation that drew condemnation and shone a spotlight on the practice of bringing weapons to protest.

The “American Patriot Rally” started on the statehouse steps, where members of the Michigan Liberty Militia stood guard with weapons and tactical gear, their faces partially covered. They later moved inside the Capitol along with several hundred protesters, who demanded to be let onto the House floor, which is prohibited. Some protesters with guns — which are allowed in the statehouse — went to the Senate gallery, where a senator said some armed men shouted at her, and some senators wore bulletproof vests.

For some observers, the images of armed men in tactical gear at a state Capitol were an unsettling symbol of rising tensions in a nation grappling with crisis. Others saw evidence of racial bias in the way the protesters were treated by police.

For some politicians, there was fresh evidence of the risk of aligning with a movement with clear ties to far-right groups.

Prominent Michigan Republicans on Friday criticized the showing, with the GOP leader of the state Senate referring to some protesters as “a bunch of jackasses” who “used intimidation and the threat of physical harm to stir up fear and feed rancor.”

President Donald Trump, who has been criticized in the past for condoning extremist views, called the protesters “very good people” and urged Democratic Gov. Gretchen Whitmer to “make a deal.”

Michigan has been the epicenter of the political showdown over how to contain the spread of the deadly virus without decimating the economy. About a quarter of the state’s workforce has filed for unemployment and nearly 4,000 people have died.

Rally organizer Ryan Kelley said the event was intended to pressure Republicans to reject Whitmer’s plan to continue restrictions on work and travel. He called the protest a “huge win,” noting the Republican-controlled Senate refused to extend Whitmer’s coronavirus emergency declaration — though she said Friday her stay-at-home order remains in effect.

Kelley, a 38-year-old real estate broker, said he and other organizers are not part of a formal group but represent people who have been harmed by the stay-home order. He said he invited the Michigan Liberty Militia, which is listed as an anti-government group by the Southern Poverty Law Center, to serve as “security.” He suggested anyone who had a problem with their presence should read the Constitution and “live life without fear.”

Gun-carrying protesters outside state capitols are a regular occurrence in many states, especially in Republican-leaning ones. But rarely do such protests converge at the same time around the country like they have during the coronavirus pandemic.

In Wisconsin, about a dozen men, several wearing camouflage, carried what appeared to be assault rifles and other long guns and stood around a makeshift guillotine at a protest attended by about 1,500 people. In Arizona, a group of men armed with rifles were among hundreds of protesters who demonstrated at the Capitol last month demanding Republican Gov. Doug Ducey lift his stay-home order. Many in the crowd also carried holstered pistols.

Gun groups have been involved in organizing several of these protests — which drew activists from a range of conservative causes. Gun rights advocates believe the restrictions on some businesses and closure of government offices are a threat to their right to own a gun, said Michael Hammond, legislative counsel for Gun Owners of America, a group that bills itself as the “no compromise” gun lobby.

Hammond said he routinely gets messages and emails from people around the country, complaining that authorities are making it impossible to exercise their Second Amendment rights. In some cases, that has meant orders closing gun shops or gun ranges or offices shutting down that process permits.

But Shannon Watts, the founder of Moms Demand Action, a gun-control group, considers these protests organized by the ultra-right and not necessarily reflective of most gun owners.

While it’s legal to openly carry firearms inside some state capitols, Watts called it “dangerous to normalize this. Armed intimidation has no place in our political debate.” She said those carrying guns at protests are almost always white men, and are “a vocal minority of the country” that opposes the stay-at-home orders.

An overwhelming majority of Americans support stay-at-home orders and other efforts to slow the spread of the virus, according to a recent survey from The Associated Press-NORC Center for Public Affairs Research.

The visual of heavily armed protesters, mostly white men, occupying a government building to a measured response by law enforcement is a particularly jarring one for many African Americans.

It draws a stark contrast to the images that emerged from Ferguson, Missouri, in 2014, when crowds of unarmed, mostly black men, women and children took to the streets in protest after a white police officer shot and killed an unarmed black teenager named Michael Brown. Then, National Guardsmen mounted on military vehicles shot tear gas indiscriminately to disperse the crowds, further flaring tensions between the predominantly black community and law enforcement.

“Systemically, blackness is treated like a more dangerous weapon than a white man’s gun ever will, while whiteness is the greatest shield of safety,” said Brittany Packnett, a prominent national activist who protested in Ferguson.

The Michigan demonstrators, she added, “are what happens when people of racial privilege confuse oppression with inconvenience. No one is treading on their rights. We’re all just trying to live.”

Trump, meanwhile, suggested it was Whitmer who should be moved to action.

“The Governor of Michigan should give a little, and put out the fire,” the president tweeted Friday. “These are very good people, but they are angry. They want their lives back again, safely! See them, talk to them, make a deal.”

Read our daily Coronavirus Live Blog for the latest updates and news on coronavirus.

Find out how you can help metro Detroit restaurants struggling during the pandemic.

See all of our Helping Each Other stories.