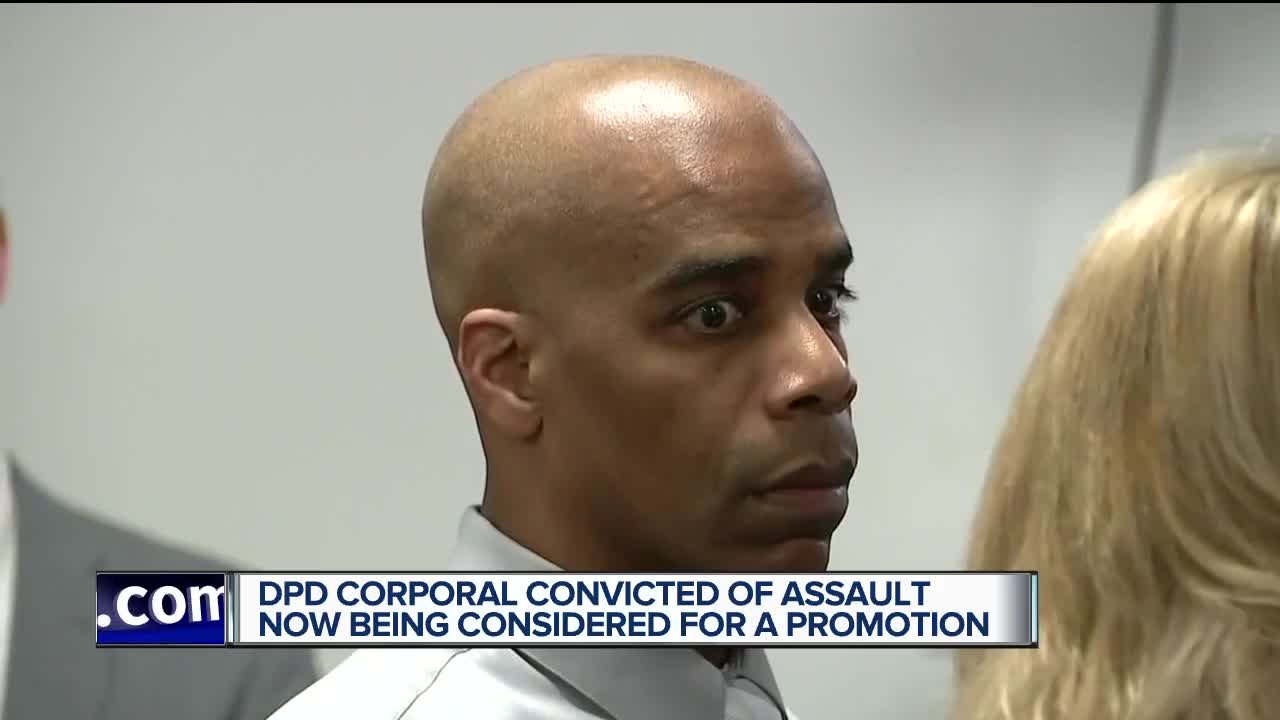 A Detroit police corporal who was found guilty of assaulting a naked mentally ill woman is up for a promotion, and one group is hoping that promotion won't happen.

DETROIT (WXYZ) — A Detroit police corporal who was found guilty of assaulting a naked mentally ill woman is up for a promotion, and one group is hoping that promotion won't happen.

Corporal Dewayne Jones was found guilty of misdemeanor assault and battery in the assault of the woman in August 2018. It was captured on cell phone video that went viral, showing Jones and the nude female patient fighting.

The woman was experiencing mental health issues and was brought to the hospital for treatment on August 1, 2018.

That evening investigators said the woman was spitting and shouting profanities. It's alleged she also bit one police officer on the forearm and thigh.

Investigators allege that when Jones attempted to restrain the woman, he punched her in the face and upper body.

In May 2019, a judge sentenced Jones to probation in the incident, while also ordering him to take anger management classes and community service.

The Detroit Board of Police Commissioners voted down his promotion on Thursday afternoon. His new rank would be sergeant.

Despite that vote, he is still able to get promoted due to an arbitration order as part of the collective bargaining agreement.

Detroit Police Chief James Craig spoke at the meeting and said that his promotion is being considered due to a binding arbitration order that goes back to an incident in 1999. In that incident, an arbiter ruled that an officer with discipline could be promoted, the chief said.

Craig said according to the DPOA collective bargaining agreement, "the city is obligated legally and morally to provide equality of opportunity, consideration, and treatment for all members."

Kevin Fischer, the executive director of the National Alliance on Mental Illness Michigan, wrote a letter urging the board to vote down his promotion.

"The possibility of promotion for an officer of the law convicted of assault and battery of a defenseless citizen diagnosed with a serious mental illness is frankly unacceptable," he wrote. NOTHING she could have said or done justifies the beating administered by Corporal Jones."