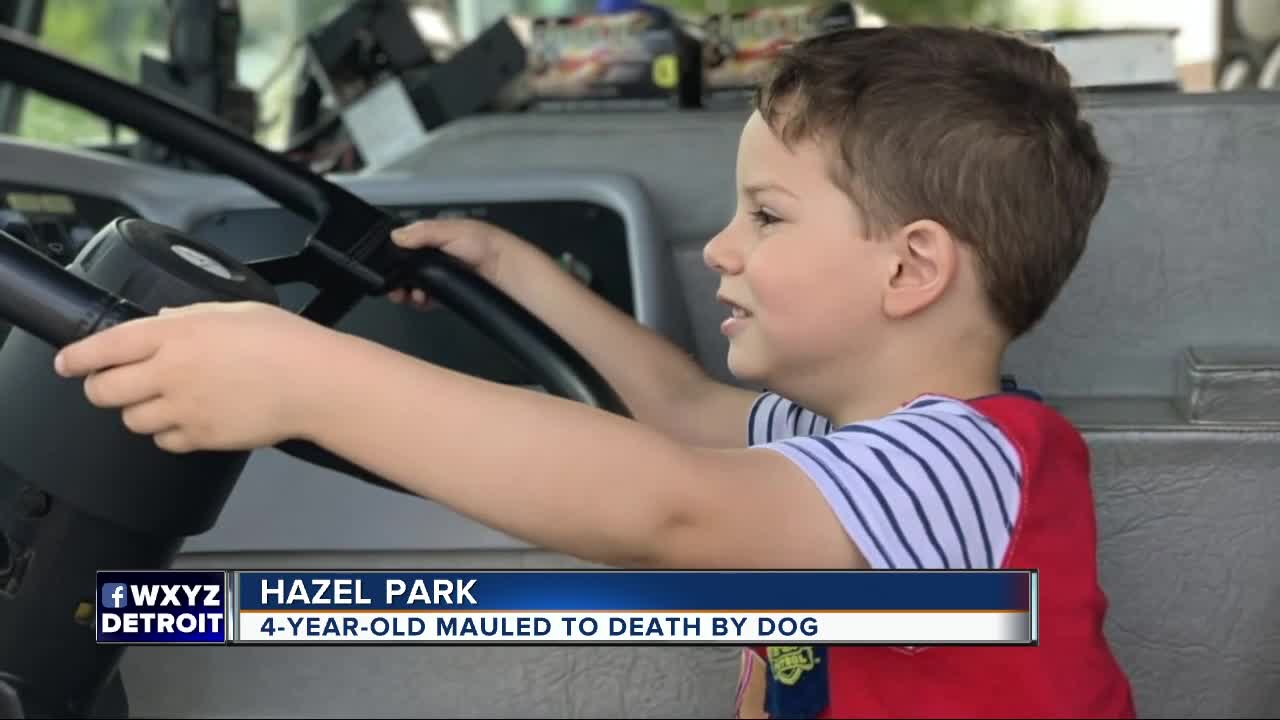 A family in Hazel Park is grieving the loss of a 4-year-old boy after an unexpected dog attack Tuesday night.

HAZEL PARK, Mich. (WXYZ) — A family in Hazel Park is grieving the loss of a 4-year-old boy after an unexpected dog attack Tuesday night.

“The mom was in the room at the same time," said Hazel Park Police Chief Brian Buchholz. "She heard a low growl, turned and the attack was already happening."

Despite his mother's attempts to save him, even stabbing the 60-pound pit bull who had hold of her son with scissors and then a kitchen knife, little Benjamin died from his injuries.

Police tased the 1-year-old pit bull to get it away from the boy. The dog then ran out of the house but was later found and euthanized, according to police.

The attack has shaken the entire community of Hazel Park, and also the officers who responded to the scene after Benjamin's 14-year-old sister called 911 for help.

“They heard the screaming," Chief Buchholz told 7 Action News. "And they didn’t know what they were responding to. But they knew it was bad."

It all happened inside the family's home on East Woodruff, which is just a few blocks from the police station. According to a family statement, they were watching the dog for some friends and were not made aware of any previous signs of aggression regarding the dog.

“No words can ever explain the depth of our love for him. This has taken an unimaginable toll on our family, friends, and all those who knew our sweet boy,” The family said of little Benjamin, who died of sharp force trauma, according to the Oakland County Medical Examiner.

According to the City of Hazel Park, the dog that attacked Benjamin was not licensed with the city. Chief Buchholz said officers are still investigating, but that charges against the dog's owner(s) are possible.

“I don’t know (about) the pit bulls," said one neighbor following the attack. "I wouldn’t have one but you hear so many stories about them."

This tragedy comes a little more than two months after 9-year-old Emma Hernandez was mauled to death by three pit bulls on Detroit's west side. The owner of those dogs has since been charged with murder for the girl's death.

This attack has again sparked a debate over the pit bull breed. Following an attack in 2011, the City of Hazel Park passed an ordinance that banned the breed, but according a city spokesperson, the ban wasn't effective in protecting people and in 2015 the ban was repealed.

In 2017, a more general "Dangerous/Vicious Animals" ordinance was put in place. See it below @wxyzdetroit @cityofhazelpark pic.twitter.com/Wl4EX7v66Q

In 2017, the breed-specific language was removed altogether and instead a more broad "Dangerous/Vicious Animals" ordinance was enacted.

According to the city, part of the problem with a breed-specific ban is that so many dogs are mixed breed, it's hard to pin down which dogs meet the pit bull criteria. The city also noted that the ban was not effective because not all pit bulls show the same aggression, and some breeds outside of pit bulls show aggression as well.

"On October 29, 2019, we experienced a families worst nightmare when a dog took the life of Benjamin. No words can ever explain the depth of our love for him. This has taken an unimaginable toll on our family, friends, and all those who knew our sweet boy. A kind gesture to help a friend in a time of need, for a dog that was said to have never shown aggressive behaviors has turned into a horrifying loss for our family. We have learned that we are far from alone in our struggle, as diligent and loving parents from all walks of life have suffered this catastrophic loss under similar horrifying circumstances. Prayers, thoughts, positive wishes, and any donations to the family are welcome at this time."

The family has also started a Go Fund Me page to help pay for Benjamin's memorial service.