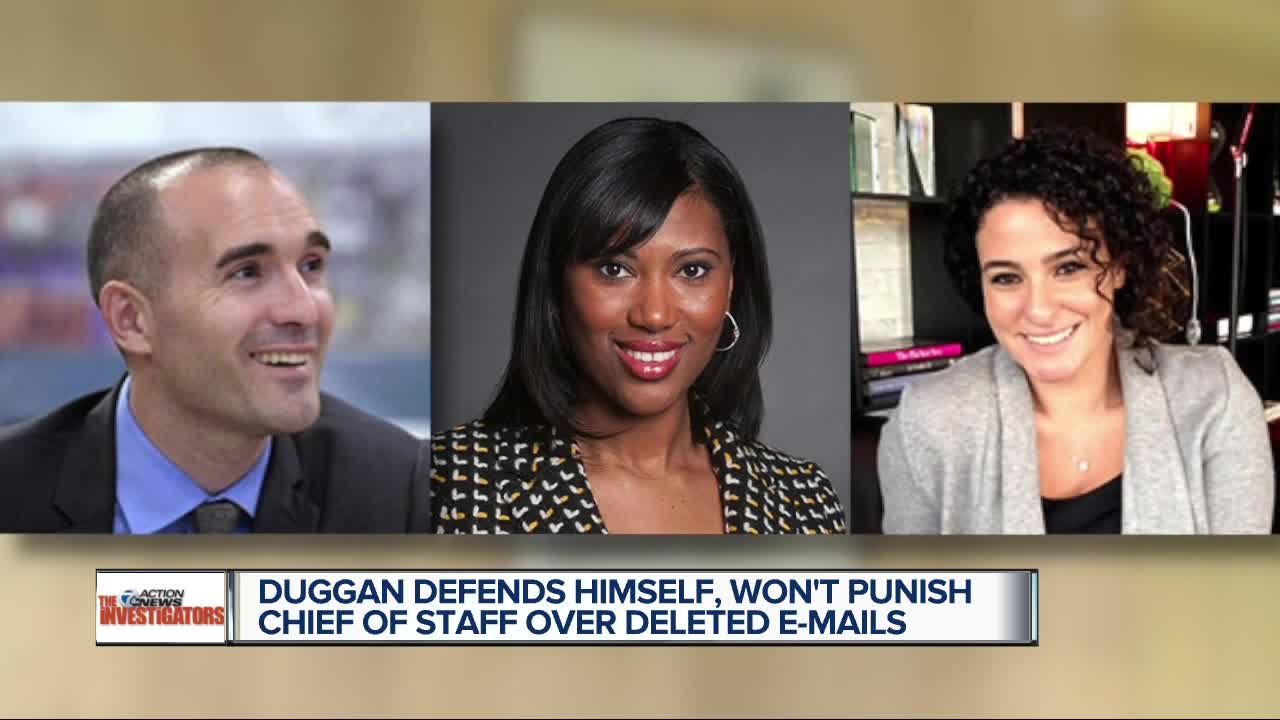 Detroit Mayor Mike Duggan held a press conference on Tuesday, one day after the city's Office of Inspector General found he gave preferential treatment to a program founded by a woman with whom he had a relationship, and that his chief of staff ordered that city e-mails about the program be deleted.

DETROIT (WXYZ) — Detroit Mayor Mike Duggan said his chief of staff had the "best of intentions" when she twice ordered suborindates to delete e-mails about a prenatal program embroiled in controversy.

In a press conference on Tuesday, Duggan pushed back against the city's Office of Inspector General report that found the mayor gave preferential treatment to a program, Make Your Date, founded by a woman with whom he had a relationship.

In the press conference, Duggan said "there was nothing to cover-up," and also said that Alexis Wiley, his chief of staff, and two other employees involved in the deletion of emails would receive training on record retention policy. According to Duggan, there will be no further discipline.

A defiant Mayor Duggan says an inspector general probe into “Make Your Date” found no rules or laws were broken.

“There was nothing to cover-up.” pic.twitter.com/ZOESYQWboE

Duggan orders that Alexis Wiley and two other employees involved in the deletion of emails receive training on record retention policy.

There will be no further discipline.

The report was released on Monday morning after a months-long investigation by the OIG into questions involving the Make Your Date (MYD) program, run in conjunction with Wayne State University, and its connection to support from the city of Detroit. The investigation started in April and according to the OIG, the office reviewed more than 400,000 pages of documents, interviewed about a dozen people and researched best practices.

In an interview today, Duggan pushed back on the Inspector General's findings.

"They were trying to keep two junior staff people from being dragged into the media circus," Duggan said today by phone. He said that Wiley's intentions were good, it "made something look wrong when there was nothing to hide."