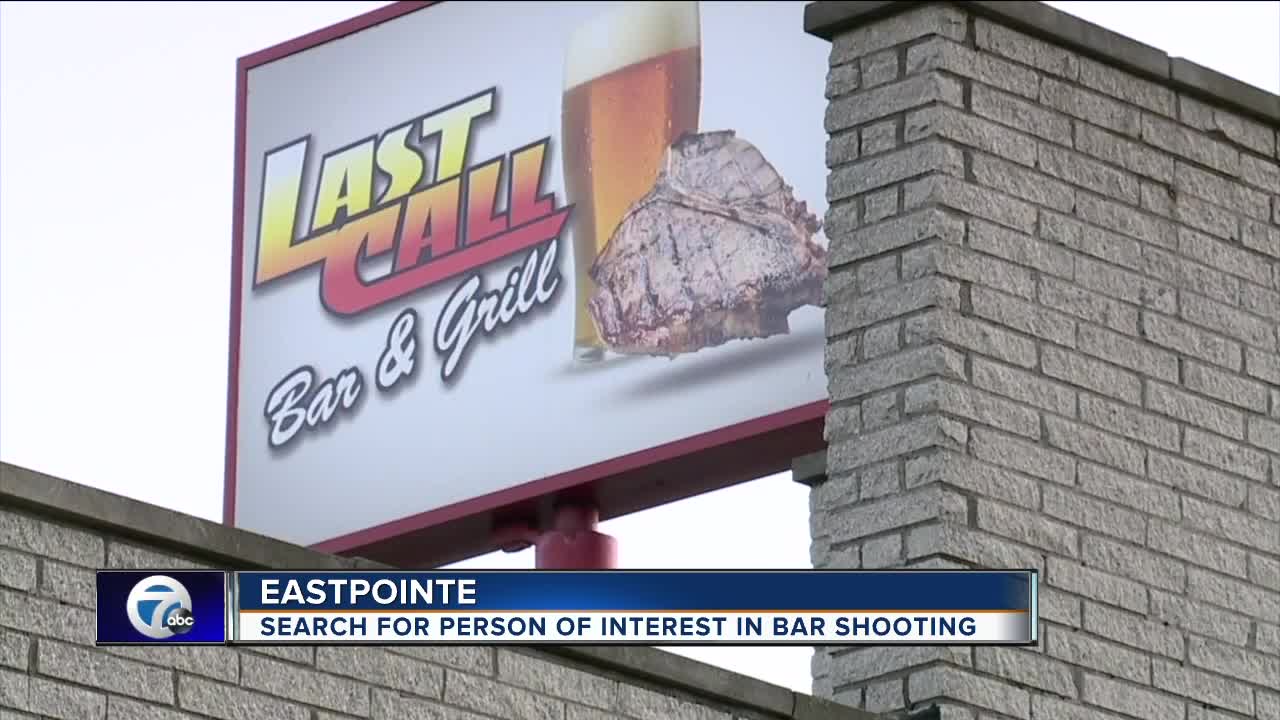 The man suspected of opening fire with a semi-automatic weapon at a crowd of people outside an Eastpointe bar Saturday is in custody.

EASTPOINTE, Mich. (WXYZ) — The man suspected of opening fire with a semi-automatic weapon at a crowd of people outside an Eastpointe bar Saturday is in custody.

According to Eastpointe police, the shooter struck six people, including 34-year-old Jared Glenn, who remains in critical condition. Glenn was struck in the head when running outside to help a friend, according to witnesses. Family friends tell 7 Action News Glenn is on life support.

RELATED:Friends of Eastpointe shooting victim pray for his recovery

Monday, police released a photo of a man they hope will help them in their investigation. The photo was taken inside the Last Call Bar & Grill. Shots were fired in the parking lot just after 2 a.m. Saturday.

The man, who is being described by police as a person of interest, was with the shooter at the bar Saturday evening, according to witnesses. That man may have even left with the suspect.

Meanwhile, Eastpointe PD wants to talk to this man, who witnesses say was with the suspected shooter at the bar and may have even left with him. They’re hoping he can assist in this investigation @wxyzdetroit @CrimeInTheD pic.twitter.com/YKtYs6F5q6

Police said the shooter was asked to leave by security after some sort of scuffle. He reportedly left the bar, and fired shots as a large group of people exited.

Detectives hope the man with him that night could provide information about what led up to the shooting.

Friends of Jared Glenn are praying for the Roseville man's recovery.

“The first thing we said was, I’ll bet you he was helping," said Terry Monkaba.

Monkaba, the executive director of the Williams Syndrome Association, met Glenn through the organization. Glenn has the genetic condition that can affect development and the heart, among other things.

"And that’s typical of many with Williams Syndrome," Monkaba told 7 Action News. "They’re known for their social and endearing personalitie."

Dozens of people gathered outside the bar Sunday evening to pray for Glenn, who they said didn't know the shooter.

“To have someone like Jared, who is so close to us be affected, none of us have worked all day, or all weekend," Monkaba said.

Police are meeting with prosecutors Tuesday to discuss how to move forward with the case and possible charges.

Anyone with information on the man believed to be with the shooter Saturday should contact Eastpointe Police at 586-445-5100.