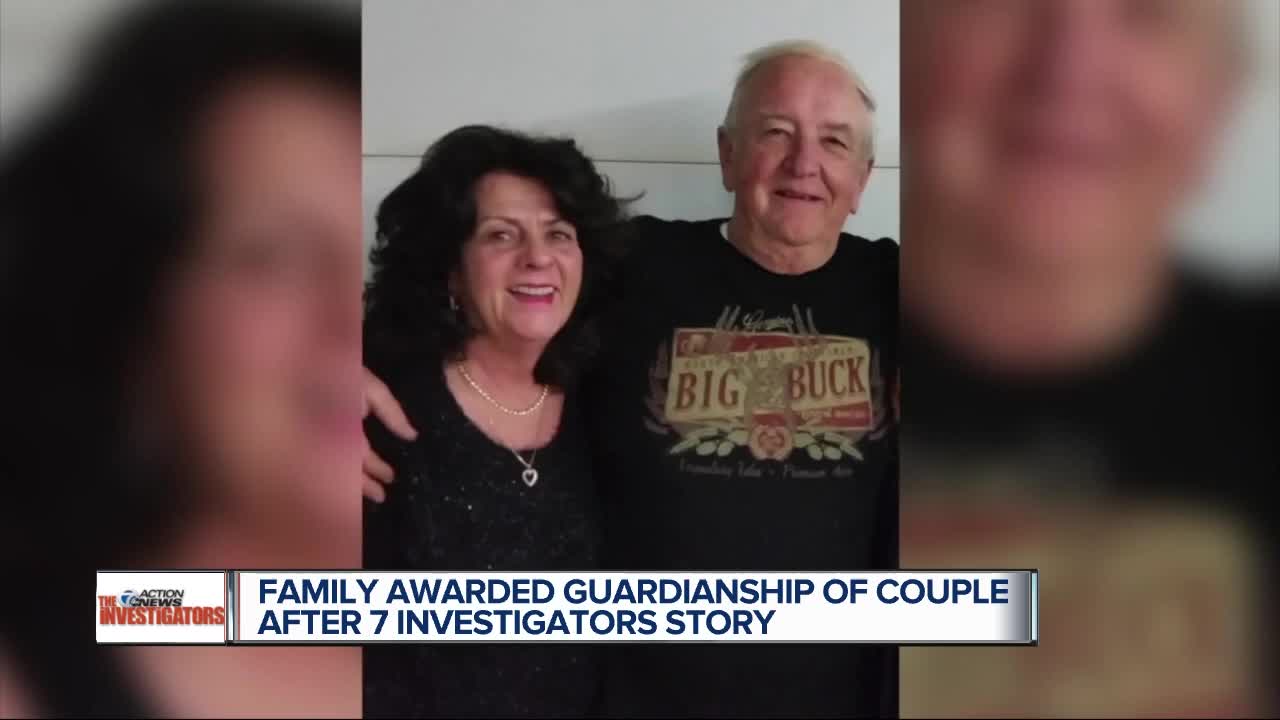 After 8 months, a Macomb County couple is back in the care of their relatives.

MOUNT CLEMENS, Mich. (WXYZ) — After 8 months, a Macomb County couple is back in the care of their relatives.

It’s a controversial guardianship case that’s caught the attention of the Supreme Court and the Attorney General.

The Mitchell family is rejoicing- after Judge James Biernat Jr. awarded them guardianship of their relatives. #probate #guardianship ⁦⁦@wxyzdetroit⁩ pic.twitter.com/rTEoXerwgd

Marcie Mitchell has been fighting for guardianship of her dad, Bob Mitchell, and her step-mom, Barbara Delbridge, since November 2018. Now she’s being reunited with them.

Marcie will now be the guardian for her father. Marcie’s Aunt, Anita Little, will become the guardian for her step mother. That means relatives will be making all of their medical and legal decisions for them, instead of a guardianship company.
Both Barb and Bob are suffering from dementia and other health issues.

Macomb County Probate Judge Kathryn George refused to appoint Marcie as guardian back in November. Instead she appointed a company called Caring Hearts Michigan Inc, that’s owned by Cathy Kirk. Kirk then hired her own company called Executive Care to provide 24/7 home care to Bob and Barb, which legal experts say is not allowed under the probate laws.

Bob and Barb’s relatives say Caring Hearts stopped letting them visit and built a six-foot tall privacy fence around their Utica home. Caring Hearts said the fence was to keep Bob safe because he keeps trying to escape. Relatives believe it was to keep them from seeing Barb and Bob.

After the 7 Investigators first exposed the case, the Michigan Supreme Court stepped in and the Attorney General ramped up their investigation. A representative of the AG, the state’s Public Administrator, was in court today monitoring case.

Macomb County Chief Judge James Biernat Jr. took Judge George off the case after 7 Investigator Heather Catallo’s first story on this. On Wednesday, Judge Biernat awarded guardianship to the family members through a stipulated order between the relatives.

Family members thanks their supporters and say they can’t wait to resume care of Bob and Barb. They plan to move them to a facility that can care for them.

A court-ordered conservator will stay in place for 60 days. After that family members will take over the financial obligations of Bob and Barb.

Caring Hearts Michigan released this previous statement in May regarding the investigation:

Caring Hearts Michigan, Inc. was appointed as guardian and conservator in this case due, in part, to its relationship with Executive Care, a CHAP-Certified in-home care company. Caring Hearts does not accept guardianships or conservatorships on a large-scale basis. Prior to its appointment, Robert and Barbara were malnourished and living in dangerous and unsanitary conditions. Now, Robert and Barbara are safe and healthy living in their own home. Caring Hearts will continue to do everything in its power to provide for Robert and Barbara’s safety and wellbeing in the most cost-effective way possible without separating them or causing undue hardship. Their safety and wellbeing is our only concern.