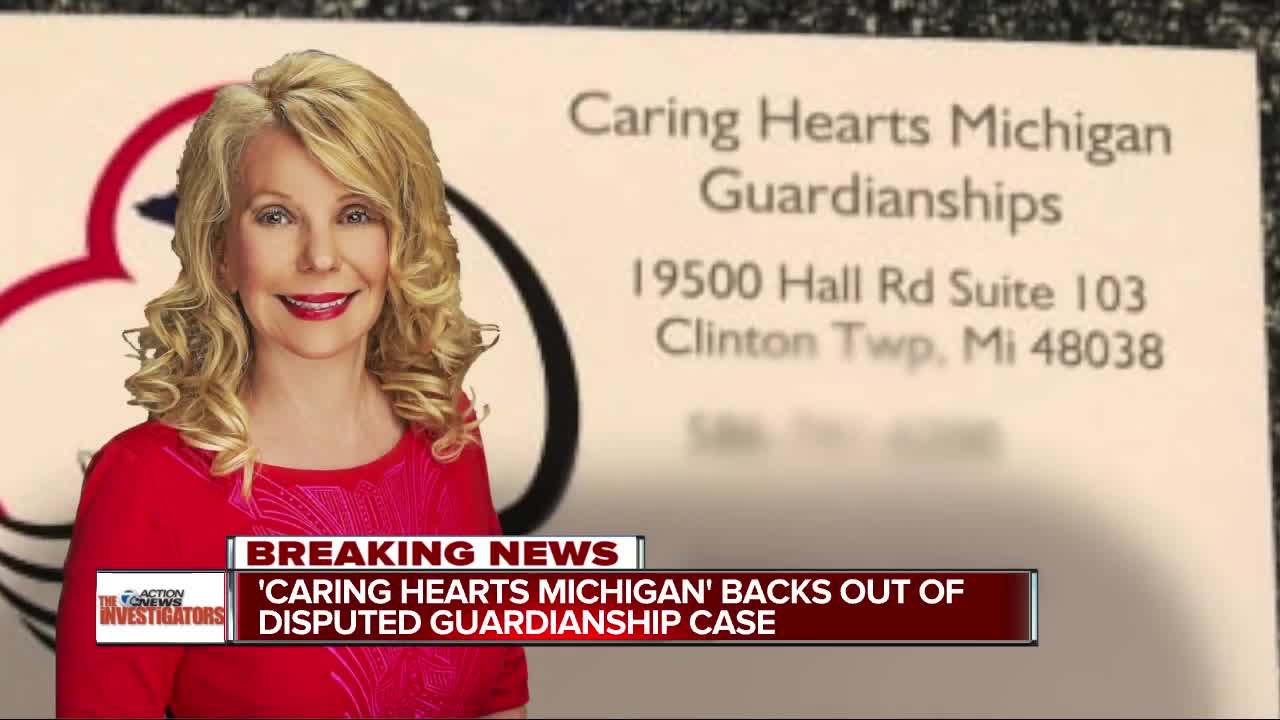 The guardianship company appointed to care for an elderly Utica couple is now is asking to be taken off the case. This all comes after Heather Catallo’s investigation prompted the Attorney General and the State Supreme Court to step in.

(WXYZ) — We have another new update to a 7 Action News Investigation that’s been getting attention across the country. The guardianship company appointed to care for an elderly Utica couple is now asking to be taken off the case. This all comes after Heather Catallo’s investigation prompted the Attorney General and the State Supreme Court to step in.

The lawyer for Caring Hearts Michigan has now alerted the Mitchell family in writing that they plan to withdraw as guardian and conservator in this case, and they say they are dropping their request for a restraining order against the family.

“I just want my parents back. I want them to enjoy their retirement that they should have had, prior to this company taking over,” said Marcie Mitchell. Mitchell is hoping she will soon get her parents back.

As the 7 Investigators first showed you, Mitchell went to Macomb County Probate Court last November to get guardianship of her dad Bob Mitchell, and her step-mom Barb Delbridge. Both are suffering from dementia and other issues.

Under the law, as a family member, Marcie has what’s called “priority” to become guardian. But Judge Kathryn George said she had “grave concerns” about Bob and Barb, and appointed a private company called Caring Hearts Michigan Inc. as guardian and conservator instead for both Barb and Bob.

“When I tried to speak, I was cut off,” said Mitchell about her court hearing in front of Judge George. “I was very intimidated, extremely intimidated I guess would be the right word.”

Caring Hearts Michigan is owned by Cathy Kirk. Court records show that Kirk hired her own company called Executive Care to provide caregivers 24 hours a day to Barb and Bob.

Macomb County Probate Court officials say that business relationship was not initially disclosed, which is required by court policy.

“You’re being enriched through your work as the guardian in a way the law didn’t intend for you to be enriched,” Michigan Elder Justice Initiative attorney Nicole Shannon told 7 Investigator Heather Catallo.

Shannon says guardians are allowed to charge for their services, but the arrangement in this case raises questions.

“What isn’t permitted under the law is to directly provide those services yourself where you are also selecting yourself as a service provider, and then you are being compensated not only as the guardian but also the service provider as well,” said Shannon.

After the 7 Investigators started looking into this case, Caring Hearts attorney Michael C. Taylor (who also happens to be the mayor of Sterling Heights) tried to get a restraining order against Marcie and her other relatives. Taylor works for the law firm that belongs to Cathy Kirk’s husband, Robert Kirk. Kirk is a Macomb County Public Administrator working in the probate courts.

“The court specifically told Executive-- excuse me Caring Hearts -- that these folks are not being protected. We need somebody who can be hands on, get here and make sure that they’re being protected,” Taylor told Catallo while 7 Action News was interviewing family members outside Bob and Barb’s home in Utica last month.

According to an email sent to lawyers for members of the Mitchell family, the petition for sanctions and the restraining order against the family is being dropped. This comes at the same time that the chief judge of the Michigan Supreme Court and the Attorney General are scrutinizing this case.

On Friday in a joint statement, Michigan Supreme Court Chief Justice Bridget McCormack and Macomb County Circuit and Probate courts Chief Judge James Biernat Jr. said, “Vulnerable Michigan residents and their families must have confidence that probate courts are following the law and taking appropriate steps to protect their rights. That’s why the Michigan Supreme Court is working with the Attorney General on the Elder Abuse Task Force to address concerns raised about the adult guardianship system.

We have recently become aware of specific concerns regarding Macomb Probate Judge Kathryn George alleging that proper procedures are not being followed in her court and the rights of families are not being safeguarded. We commend the Attorney General who has already begun an investigation about these concerns and ask her to use the full powers of her office to examine how vulnerable adults are being treated.”

Caring Hearts is blaming their resignation on disruption from family members. You can see their full statement here:

It’s not clear yet who will become the new guardian when everyone heads back to court later this month, but Judge Kathryn George will not be presiding over this. Chief Judge Biernat took her off this case Monday.

If you know of a case of elder or guardianship abuse, the Michigan Attorney General Elder Abuse Task Force wants to hear from you.
You can reach them here or call 1-800-242-2873.