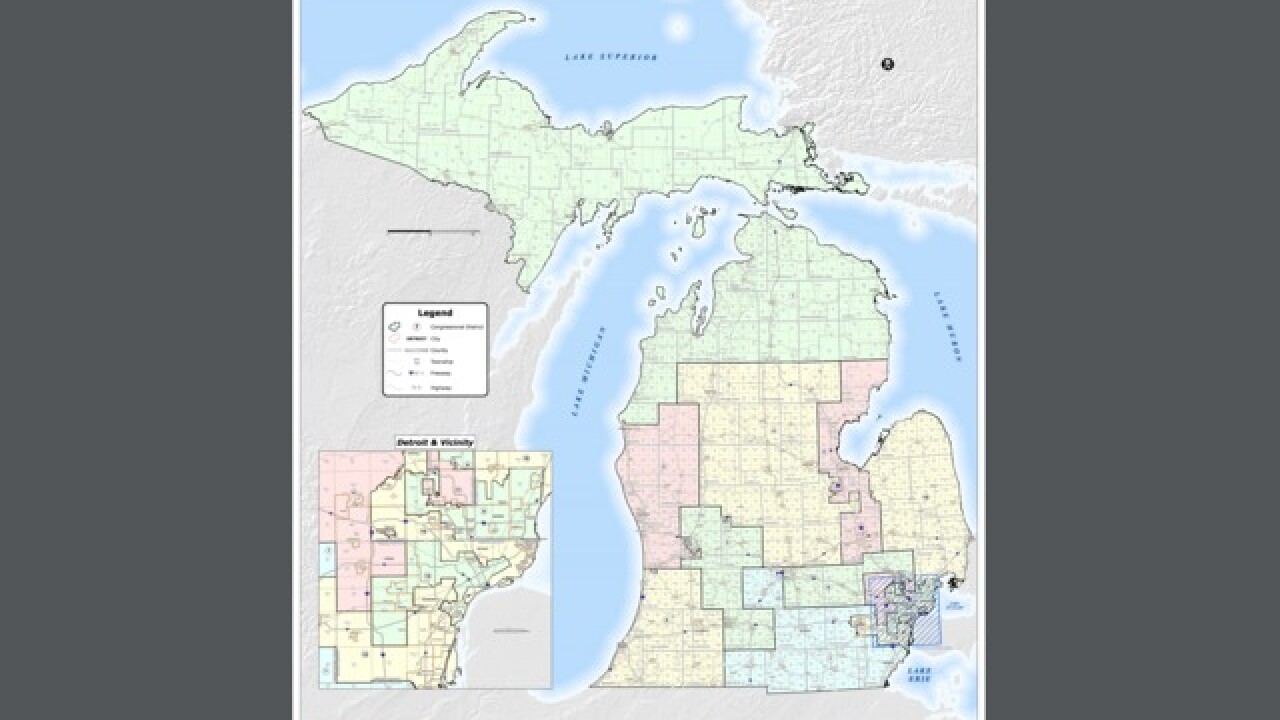 Michigan voters will now decide how legislative districts are drawn after the Michigan Supreme Court rejected a lawsuit against a group proposing to end gerrymandering in the state.

In case you didn't know, redistricting happens every ten years and is when the political party in power draws district lines for the U.S. House, state house and state senate. The last time this happened was in 2010, and it will happen again in 2020. Gerrymandering is when those district boundaries are drawn to favor one party.

Michigan's second congressional district covers the northern west side of the state, which includes several counties and major cities including Grand Haven, Holland, Ludington and Muskegon. It is currently Republican.

The fourth congressional district covers the middle part of northern lower Michigan stretching all the way down just north of Lansing. It includes Mt. Pleasant, Midland and Big Rapids and is currently Republican.

Michigan's fifth congressional district is a strip of land that stretches from the east portion of northern lower Michigan down along Lake Huron through Saginaw and into Flint. Major cities include East Tawas, Standish, Saginaw, Bay City and Flint. It is one of five districts that have a Democratic representative.

The sixth congressional district consists of southwest lower Michigan with major cities including Kalamazoo, Benton Harbor and St. Joseph. It is currently Republican.

The seventh congressional district represents part of southeast Michigan, south-central Michigan and includes Jackson, Monroe, Chelsea and part of Lansing. It wraps around Ann Arbor in Washtenaw County and is currently Republican.

Michigan's eighth congressional district includes part of northern Oakland County and stretches across Ingham and Livingston counties to include the other part of Lansing. Other cities include Rochester Hills, Clarkston, Lake Orion, East Lansing, Brighton and more. It is represented by a Republican.

The ninth congressional district is located in metro Detroit and has to have a zoomed-in map to see the entirety of it. It includes part of Macomb County with cities like Warren, Sterling Heights, Fraser and Eastpointe, as well as part of Oakland County including Ferndale, Hazel Park, Madison Heights and up to Bloomfield Township. It is represented by a Democrat.

Michigan's 10th congressional district covers the thumb region and includes parts of Macomb County up through the thumb. Cities include Port Huron, Lapeer, Bad Axe, Macomb and Shelby townships, Marlette and more. It is Republican.

The 11th congressional district also is in metro Detroit and includes part of Wayne and Oakland counties. Cities include Livonia, Canton, Plymouth, Troy, Auburn Hills, Milford and South Lyon. It is also Republican.

Michigan's 13th district covers Wayne County and includes part of the city of Detroit, part of Dearborn Heights, as well as Wayne and Westland, River Rouge, Highland Park and more. It's drawn between districts 11, 12 and 14. It is currently not represented but was represented by Democratic Rep. John Conyers before his retirement.

The final district in Michigan includes parts of Wayne and Oakland counties. It stretches from parts of Detroit and eastern Wayne County with the Grosse Pointes, through Oak Park and Southfield and includes West Bloomfield Township, Orchard Lake and Farmington Hills. It is the last of the districts represented by a Democrat.