Investigators focusing on 4 alleged assaults in fight at Denby vs. Almont game 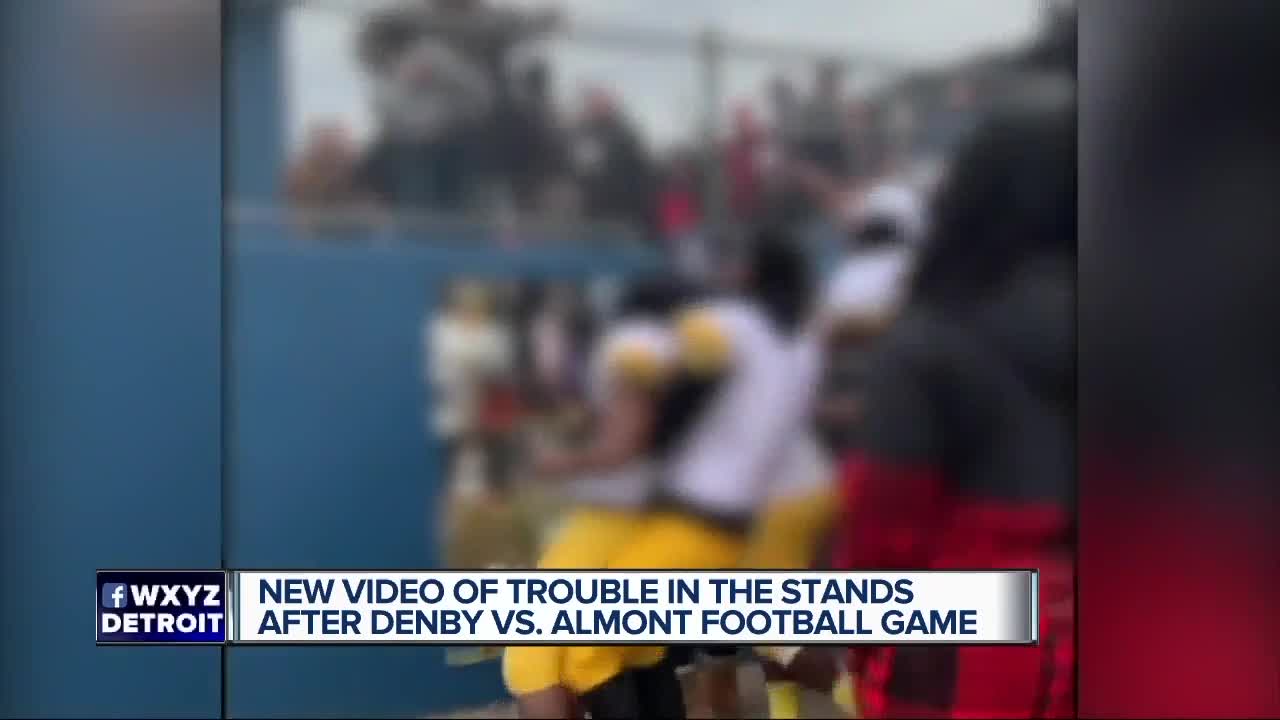 Investigators looking into a fight between Detroit Denby football players and Almont are focusing on four different alleged assaults, 7 Action News has learned.

According to the Oakland County Sheriff's Office, they are looking at four assaults, three of which can apparently be seen by new video.

According to Almont Superintendent Dr. William Kalmar, the district identified the person who allegedly spit on the Denby player. They say that person doesn't live in Almont or Lapeer County, and is a relative to an Almont player. They also tell us that the person's name has been passed along to investigators and he has been banned from all Almont events.

He also said that he has different thoughts about possibly charging the students, saying they were emotional after the game.

In a statement released to 7 Action News, he said in part, "It is disappointing that high school black student-athletes would be blamed for their reaction to racist hate—spitting, racial slurs, and objects being thrown at them."

The sheriff's office said they have no video evidence to back up the claims from Vitti and said the deputies in the middle of the fight did not hear racial slurs.

They also received more than 40 written statements were submitted from Denby, but many talked about what happened during the game, not after, and several were not signed or had no name, phone number of contact information.

The office is also working with Ralph Godbee, the current police chief for DPSCD and a former Detroit police chief in the investigation.

The investigation continues and if more information and evidence are gathered that shows more than four incidents of assaults, it will be included in the case and taken to the Oakland County Prosecutor's Office.

The game was called with about 3 minutes left in the fourth quarter with Almont winning the game 36-8.

A letter last month from Almont also quotes the MHSAA officiating crew, which reported to the MHSAA: "Almont displayed exceptional sportsmanship and composure during the semifinal contest with Detroit Denby High School. Almont never retaliated or complained while they were receiving illegal hits from the opposing team – such as blocks in the back and blind side blocks. Almont maintaining their composure greatly helped the officiating crew maintain as much control as could be maintained in what was a difficult game to manage and officiate. Almont should be commended and praised for their role in this game, maintaining focus and sportsmanship."

On the day of the game, no one was seriously injured and no one was arrested.

Kalmar said he sent a letter to Vitti that reads:

I wanted to share with you some information regarding the investigation into Saturday's incident. I have attached a video to this email which shows the individual who spit on your student athlete and, I believe, your principal. Despite the fact that a student athlete from Denby spits on this individual first, it does not absolve this adult of an obligation to control himself, nor does the audio capture what this individual may have said. We have referred his identity to the school resource officer at Walled Lake who is responsible for this investigation. This individual is neither a resident of Almont, nor an alumnus.

I would like to propose we publish a statement of unity between our two schools today or tomorrow recognizing that the bad acts of a few on both sides should not diminish the accomplishments of both programs. Nor do these individuals actions represent the communities our students hail from. Additionally, I would like us both to encourage calm and patience to allow the investigation to move forward. On social media, this incident has been hijacked by individuals on both sides with no allegiance to either school. We have seen threats of violence against our community if we come down to the game Saturday posted online by people who live in New Orleans! Of equal concern are those who are attempting to use this incident to promote a racist agenda while expressing sympathies for Almont! I know that both your administration at Denby and my administration at Almont High School have addressed the need for students to stay out of the social media sewer. As far as I know, this issue is no longer, if it ever was, about student interactions.

Additionally, I would like to have my high school principal reach out to your principal at Denby to look for positive way our schools can connect at some point in the coming weeks. We have an opportunity here to serve as an example of what is right in our communities.

In many ways Saturday was one of the best days and worst days I have had since I became the Superintendent in Almont. Perhaps God has given you and I the opportunity to rise above our national issues with race and make a statement greater than football.

Please let me know your thoughts.

Vitti's entire statement is below.

“Unfortunately, the statement released by the Almont superintendent continues to demonstrate a lack of understanding about race in this country and state. It is disappointing that high school black student-athletes would be blamed for their reaction to racist hate—spitting, racial slurs, and objects being thrown at them. It is irresponsible to identify “blocks in the back” and football penalties as the cause of the unrest that occurred after the game. Let’s get this straight—teenagers—high school student-athletes---who are black—were spit on, called racist names, and had objects thrown at them after the game. Period. Young men were disrespected by adults—who were white--and in turn our students were rightfully angry. They were standing up for themselves, their teammates, and in some cases their coaches and administrators. The Almont superintendent reached out to me to state that he was condemning any and all hateful actions. I respected that. However, I would not agree to, and will not agree to, issuing a statement that in essence states that there were bad actors on both the Almont and Denby sides. I will not equate hate and responding to hate as equal acts. In fact, buried in the Almont superintendent’s statement he acknowledges what we have been saying from the beginning—that there was evidence of hateful acts occurring from Almont fans (although he isolates it to one fan). To be clear, this is not about making this issue about race—the issue is about race. When student-athletes are called the n-word from white fans it’s about race. Moving forward, we would like to see the Michigan High School Athletics Association work with Detroit Public Schools Community District to ensure more Detroit fields are used for later playoff games, that we actively recruit and develop more diverse referees, that playoff games are officiated by crews who work in the leagues teams play in, and that referees are trained in issues of power, privilege, and race, and use their authority to dismiss any and all fans that use racist chants, language or threats.”