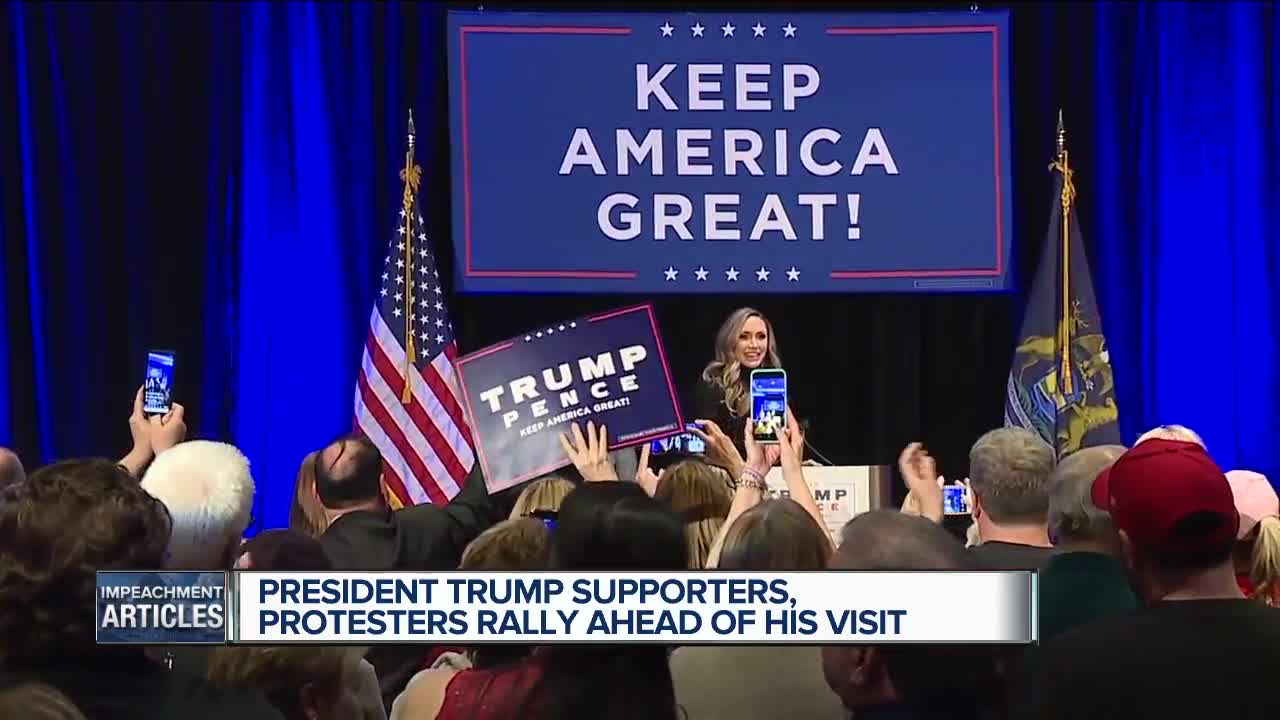 Hundreds of supporters, as well as protesters, are attending rallies and speaking out across metro Detroit as President Donald Trump prepares to hold a rally in Western Michigan Wednesday.

(WXYZ) — Hundreds of supporters, as well as protesters, are attending rallies and speaking out across metro Detroit as President Donald Trump prepares to hold a rally in Western Michigan Wednesday.

Macomb County is considered extremely important in the upcoming election. It's why Lara Trump spoke there tonight. At the same time, hundreds more took to the streets of Ferndale with an opposition message.

Specifically, the president's rivals she says still can't handle the fact he won in Michigan and upset so many who counted him out for the presidency.

FERNDALE PROTEST: “A lot of people turned out to say Pres. Trump has gone a step too far. He puts his own interests ahead of the country & we will not stand for it. We are here to protect citizens.” Anti-Trump protestor Paul Martinos speaks out. ⁦@wxyzdetroit⁩ #10PM #11PM pic.twitter.com/RV3dRrDrUv

CAMPAIGN TRAIL: “We’ve seen fundraising go thru the roof. Since Pelosi called for impeachment a couple months ago. In a way, they’re helping us out.” ⁦@realDonaldTrump⁩ senior advisor ⁦@LaraLeaTrump⁩ speaks to a crowd in Macomb Co. ⁦@wxyzdetroit⁩ #10PM #11PM pic.twitter.com/IGLNuAnzpg

“This is about the fact the anointed candidate Hillary Clinton didn’t win in 2016. This is so disgraceful what is happening to this president,” Lara said.

Supporters from metro Detroit say they're eager to hear the president speak in Battle Creek soon and believe he'll continue to create jobs and be tough on border security.

“He cares about our safety," one supporter said. "Immigration and building the wall.”

“We’ve seen fundraising go thru the roof," Lara said. "Since Pelosi called for impeachment a couple months ago. In a way, they’re helping us out.”

However, on the streets of Ferndale hundreds of people were protesting against Trump shared a different view. These demonstrators who packed the intersection of Woodward and Nine Mile say the president violated his oath in dealings with Ukraine and therefore must be impeached.

“It’s not just a matter of disagreeing," one protester said. "This isn’t politics. It’s a big thing for our country and it’s time for him to be held accountable.”

Another protester went a step further, not only saying he disagrees politically but also believes Trump is a threat to the America we know. And therefore, he must not continue as president.

On Wednesday, 7 Action News will be live in Battle Creek where the president and vice president will be speaking. There will also be more planned protests.