Some inspection reports are more than a decade overdue 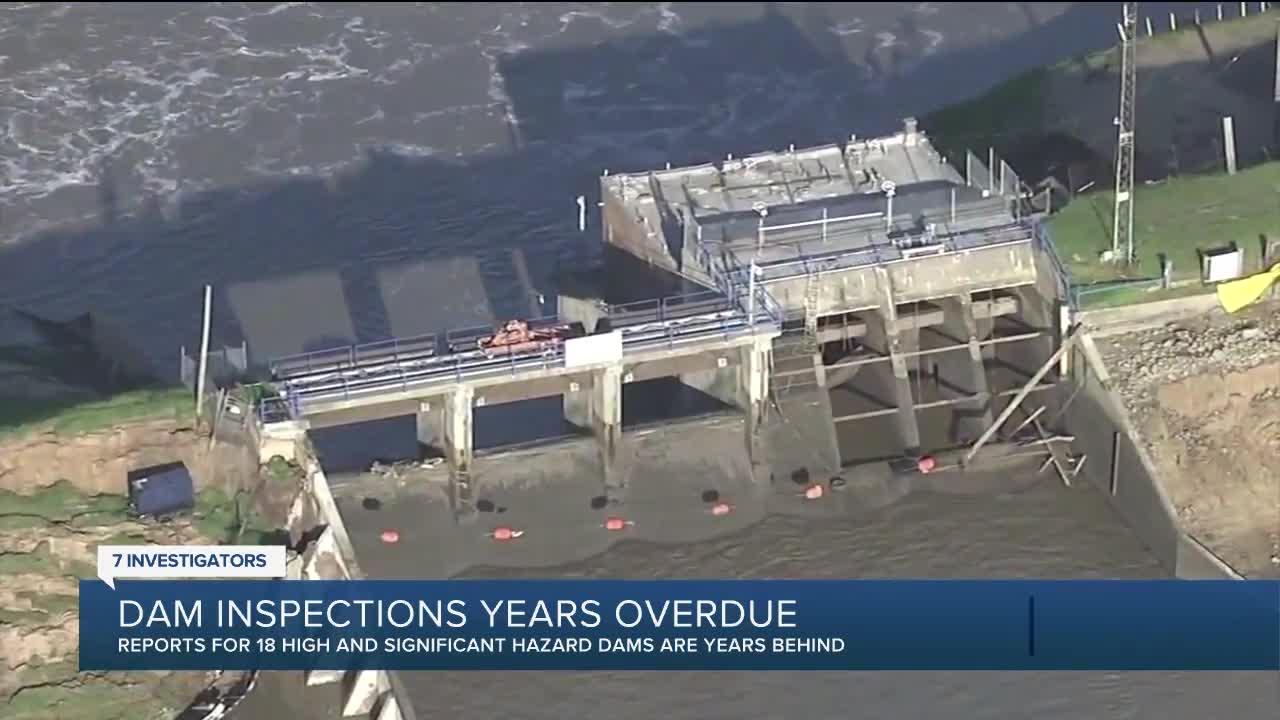 18 high and significant hazard dams in Michigan have not submitted required inspection reports with state watchdogs, with some more than a decade overdue. 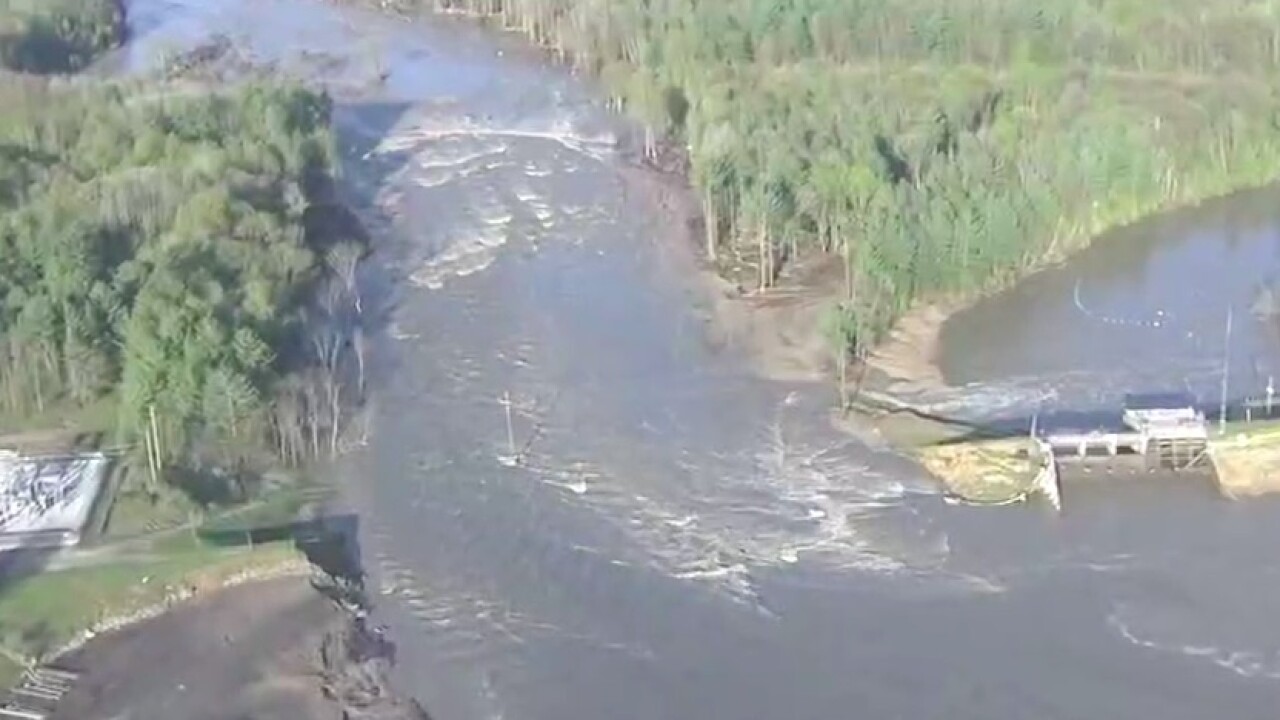 (WXYZ) — 18 high and significant hazard dams in Michigan have not submitted required inspection reports with state watchdogs, with some more than a decade overdue.

The revelation comes more than two months after two dams in Midland County failed, leading to thousands of homes being lost or damaged and more than $200 million in devastation.

In Michigan, dam owners are required to have their dam inspected every few years. For significant hazard dams that would lead to a loss of property if they failed, the state requires inspections every four years.

RELATED: 2 inspectors regulate 1,059 Michigan dams. Can they stop another failure?

For high-hazard dams, where failure could lead to death, inspections are needed every three years.

The inspections are paid for by the dam owner, and the report is supposed to be shared with safety engineers at EGLE, the Department of Environment, Great Lakes and Energy, to identify any deficiencies.

“A good regular inspection program is important, because it enables you to know if there’s anything developing,” said Mark Ogden, project manager with the Association of Dam Safety Officials.

But across the state, a 7 Action News investigation reveals that 18 high or significant hazard dams haven’t submitted an inspection report in at least six years. Some date back more than 20 years.

At Manitonka Lake, just north of Mount Pleasant, the Walker Creek Dam #2 hasn’t reported an inspection since 2009. That’s because, according to the association that owns it, it wouldn’t pass.

The dam partially failed a decade ago, and is currently listed in poor condition and owners say they can’t afford to replace it. About 370 families live on the lake.

The Baldwin Fish Hatchery Dam in Lake County is currently listed in unsatisfactory condition, the lowest grade possible, and hasn’t been inspected in nine years.

The owner “did not respond” to the state when they asked for the overdue inspection. In fact, 10 dam owners have ignored the state’s requests.

“That’s alarming, right?” said Luke Trumble, a dam safety engineer with EGLE. “We need to get inspection reports for them, and we are working to do that.”

According to EGLE spokesman Nick Assendelft, the Baldwin Fish Hatchery Dam “has been in poor condition for some time” and stakeholders, including the Watershed Council, DNR, and others, have been pursuing to have the structure removed. But funding challenges, as well as the owner’s recent passing in February, have made that challenging.

Even as some inspection reports lagged by more than a decade, a review of records finds that EGLE failed to take more aggressive action to ensure compliance.

In St. Joseph County, the Portage Plant Dam owner hasn’t submitted an inspection report since 2002. Today, the dam is listed in poor condition.

“It’s an older dam,” Trumble said. “There’s deteriorating concrete and lack of maintenance and things like that that need to be addressed.”

“And that owner has been out of compliance for years, right?” asked Channel 7’s Ross Jones.

“Has he ever been fined?” Jones asked.

“I don’t know if he’s been fined,” Trumble said.

After our interview, an EGLE spokesman could not find a record of any fines of the Portage Plant Dam owner, or any other dam owners, dating back the last 10 years

“(It) may have been 10 years since the department has assessed a fine on a dam owner,” said spokesman Nick Assendelft, stressing that fining a dam owner is EGLE’s last resort.

In the case of the Portage Plant Dam, safety engineer Luke Trumble said the department had used a combination of “violation notices” and “cordial reminders” to attempt to bring the owner into compliance.

“I would have hoped that we would have had more compliance sooner,” Trumble admitted. “This one’s probably gone on too long.”

Rep. Aaron Miller lives not far from the Portage Plant Dam and says EGLE needs to use all the tools in its toolbox to ensure inspections are being performed and submitted.

“If a dam owner is not showing up to the table,” Miller said, “I don’t know how you can justify keeping that going.”

“If (owners) can’t pay the fines, just like someone who doesn’t pay their property tax eventually gets foreclosed on,” Miller said. “That needs to be a route to be able to prevent another Edenville from happening.”

EGLE says they’re more interested in gaining compliance than fining dam owners. When inspection reports don’t show up, they have the power to send out their own inspectors to at least visually inspect a dam.

Still, it’s not an easy job when the entire dam safety inspection team for the state, as we’ve reported, is just two people. The duo is in charge of regulating 1,059 dams across Michigan.

“We just don’t have enough resources to be able to be proactive,” she said. “Two people on dams? They’re spread so thinly.”

As the state grapples with a mammoth budget hole caused by COVID-19, finding more money to help regulate Michigan’s aging infrastructure seems unlikely, though Bayer says she’ll push for it.

After our interview with EGLE, the department announced it was expanding its dam safety team from two engineers to three. A start day for the new hire was not specified.

“We ought to have better enforcement,” Rep. Miller said. “If there is a dam on the troubled list, do we want to wait until another Edenville happens?”