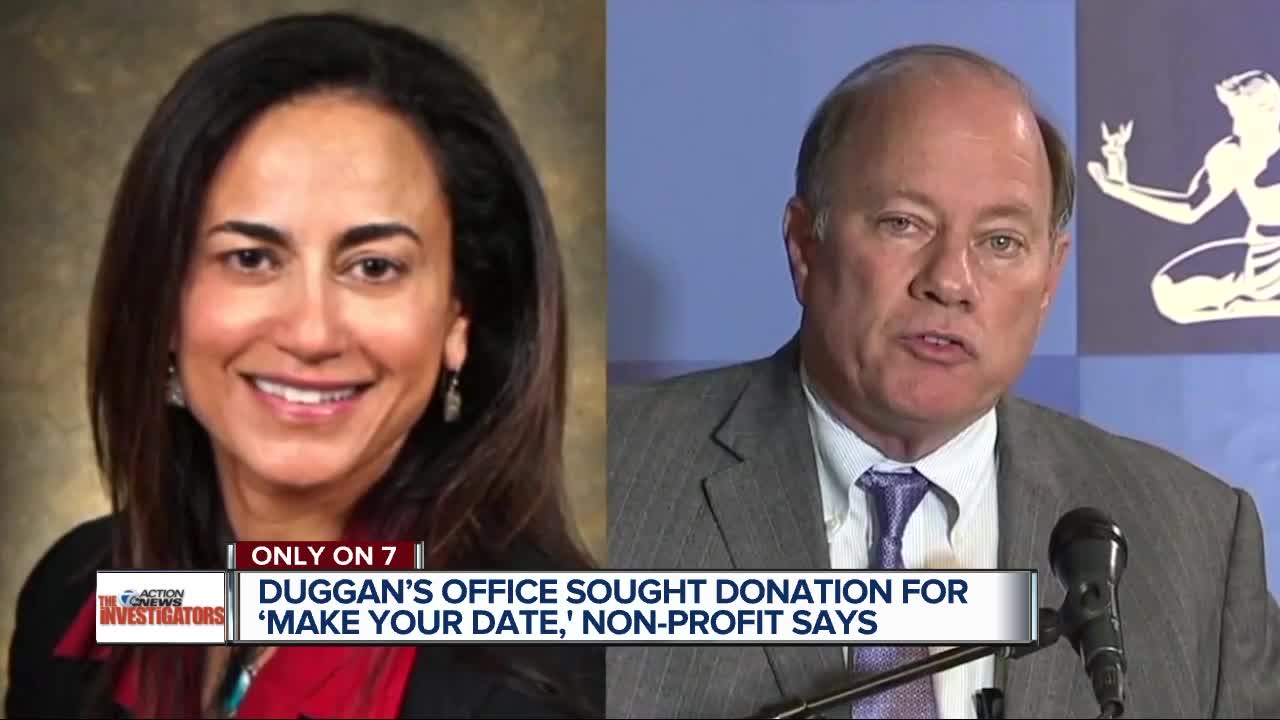 A Bloomfield Hills non-profit says it was asked by Mayor Mike Duggan’s office about donating to a program run by a woman whose relationship with Duggan has raised questions about a conflict of interest. DETROIT (WXYZ) — A Bloomfield Hills non-profit says it was asked by Mayor Mike Duggan’s office about donating to a program run by a woman whose relationship with Duggan has raised questions about a conflict of interest.

The disclosure contradicts previous statements by Duggan’s office, which had maintained city efforts to support the “Make Your Date” program never reached the level of fundraising.

The Carls Foundation, a non-profit based in Bloomfield Hills, says its office was contacted in February 2018 by Monique Phillips, a development officer from the Mayor's Office of Development and Grants. Phillips asked whether the Foundation was interested in making a donation to Make Your Date, a program founded in 2014 to help tackle Detroit’s high infant mortality rate.

“Somebody from the city called to ask about the possibility of us providing funds for it,” said Elizabeth Steig, the executive director of The Carls Foundation.

Make Your Date’s mission to lower the infant mortality rate fit with foundation’s mission, Steig said. The program’s director, Dr. Sonia Hassan, has been linked to Mayor Duggan since last year, when undercover video shot by a private investigator surfaced showing the mayor visiting Hassan’s home by himself.

Since the story was first broken by the Detroit Free Press, Duggan has insisted his office never fundraised for Dr. Hassan’s program.

“We never in any way supported or directed a cent to the non-profit. The partnership was with Wayne State University directly,” Duggan said.

But Wayne State didn’t enter the fray until weeks or months later after the call from the mayor’s office, according to officials with The Carls Foundation. It was last summer when a formal meeting was held, discussing how the foundation could help Make Your Date. Phillips, the city's development in attendance.

Ultimately, the foundation donated $51,285 that went to support Make Your Date.

Whether “Make Your Date” is a program worthy of donations isn’t up for debate: it is credited with helping bring down Detroit’s infant mortality rate and Dr. Hassan’s work for the program is completely volunteer.

Earlier this year, the City’s Inspector General, Ellen Ha, announced her office was investigating whether city officials abused their authority in supporting the program.

In a statement, Duggan’s Chief of Staff Alexis Wiley says that the city “made an inquiry” with the Carls Foundation and other non-profits about supporting Make Your Date, but it became very clear that a fundraising push wasn’t needed.

Our previous statements on this matter have been entirely accurate. We said from the beginning that we made a number of inquiries in support of Make Your Date. The Carl Foundation was one on which we made an initial inquiry, but Wayne State indicated immediately that it had the relationships necessary to pursue this funding opportunity on its own. The city provided a letter of support, but it was Wayne State that submitted the application and secured the commitment and the subsequent grant.

Still, e-mails show the Mayor’s office was kept in the loop on fundraising for Make Your Date and attended at least one meeting about securing funding.

A spokesperson for Dr. Sonia Hassan declined comment on this report.