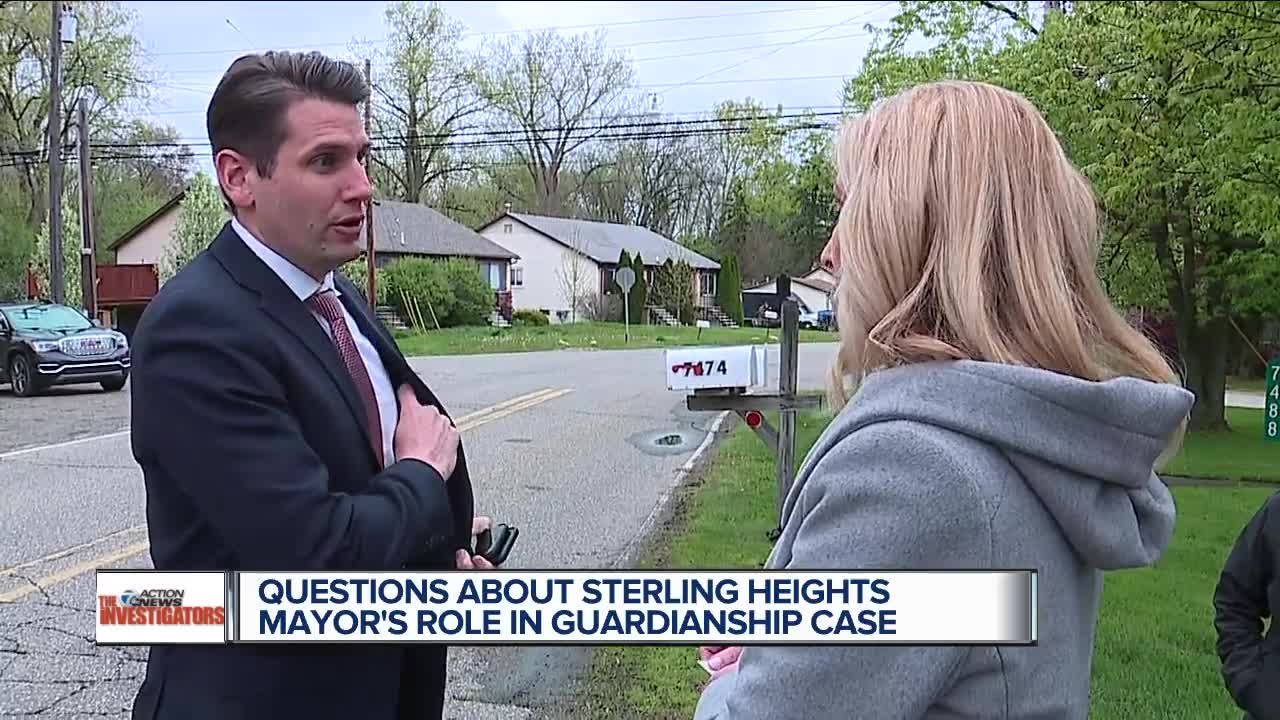 It’s a controversial guardianship case that’s caught the attention of the Attorney General and the Michigan Supreme Court.

When the 7 Investigators started investigating this guardianship case, we interviewed the family involved and we asked to interview the owner of the guardianship company so we could tell both sides of the story.

That owner refused to talk to us, but ever since we first aired this story, the lawyer for the guardianship company has taken to Twitter and Facebook to make several public comments about the family in this case.

And because that lawyer is also the mayor of Michigan’s 4th largest city, many of you had questions about his role in this.

“I’m Michael Taylor, I’m an attorney for Caring Hearts and Executive Care,” said Sterling Heights Mayor Michael Taylor as he approached 7 Action News outside a home in Utica where the we had been interviewing members of the Mitchell and Delbridge families about a controversial guardianship case.

Marcie Mitchell had been trying to get guardianship of her dad Bob Mitchell and her step-mom Barb Delbridge, who suffer from dementia and other health problems.

“I just want my parents back,” said Marcie in May.

Even though Marcie had priority under the law to become her dad’s guardian, Macomb County Probate Judge Kathryn George said she had “grave concerns” and instead appointed a company called Caring Hearts Michigan Inc. as guardian. Caring Hearts then hired Executive Care as caregivers for Bob and Barb. Both companies are tied to Robert and Cathy Kirk.

And that’s where Michael Taylor comes in: he works for Robert Kirk’s law firm.

“I’d love to have you come to my office so I can show you everything that’s been going on,” said Taylor. “We can absolutely do that,” said 7 Investigator Heather Catallo.

Taylor later rescinded that offer, telling the 7 Investigators that he had to follow his clients wishes and refused to do an interview with us.

But that did not stop him from making dozens of public Facebook posts and Tweets about the case.

“It’s unfortunate that the full story is not being reported.”

On social media Taylor said Marcie’s “neglect is the sole reason that she did not get appointed” guardian and made frequent comments about Bob and Barb’s health conditions.

“It’s scary that he’s able to get away with the statements that he’s made without proving the facts that he has none of,” said Taylor.

Several of our viewers on Facebook started questioning Taylor’s role in this case.

Denise writes: “Isn’t being a Mayor of Sterling Heights, and getting involved as a lawyer for some clients a conflict of interest?”

Elizabeth says, “How in the world can the Mayor be messed up in some scheme like this?”

The 7 Investigators also received emails from viewers asking, “How are we to be assured that Mr. Taylor has not used his position as mayor to the advantage of his business associates?”

And this isn’t the first time some of Mayor Taylor’s 130,000 constituents have questioned his use of social media. In 2017, Taylor called someone on Facebook an expletive. Taylor said the guy was a troll who had been harassing him, but some Sterling Heights residents told us at the time they did not approve of the language Taylor used.

Mayor Taylor and Sterling Heights officials would not talk to us on camera about Taylor’s recent actions.

But the city attorney told us in an email that the job of mayor is a part time position that pays $23,122 a year. That means Michael Taylor is allowed to have outside employment.

But what about the city’s Ethics Resolution that Taylor supported when it passed back in 2013?

Under the Fitness for Office section, it says “Public servants should avoid engaging in any conduct, which is likely to bring discredit on themselves and the governmental bodies in which they serve.”

The Sterling Heights City attorney told us that “without knowing the content” of Mayor Taylor’s social media posts, they aren’t in a position to decide whether they violate the ethics ordinance.

When the 7 Investigators asked why they haven’t read the public posts, a city spokeswoman did not respond.

Taylor is no longer the attorney of record for Caring Hearts Michigan. He was replaced on the case shortly after our initial stories aired.

How many hours a week does the mayor work for the city?

"The City of Sterling Heights operates under a council-manager form of government wherein the City Council hires a full-time City Manager as the Chief Administrative Officer to perform and coordinate all administrative duties of City. As is the case in many council-manager municipalities across the State, the Mayor of Sterling Heights is a part-time, elected position. The Mayor’s hours vary, depending on the number of events attended, Council meeting schedule and length, conferences attended, office hours, and the like."

What is the mayor’s city salary?

"The Mayor is compensated at a rate set by the City’s Elected Officials Compensation Committee (EOCC), an independent commission established in accordance with State law. For the current fiscal year, being July1, 2019 to June 30, 2020, the EEOC has set the salary for the elected position of Mayor at $23,122."

"The Mayor does not forfeit the right to comment because he is an elected official in Sterling Heights, especially on topics unrelated to City business. Without knowing the content of the specific media posts you are referring to, we are not in a position to analyze or comment upon whether there is any violation of the City’s ethics resolution. To the extent these posts relate your prior reporting on his legal representation on behalf of the Kirk & Huth law firm, there is no nexus to his elected official duties."

Does the type of Mr. Taylor’s outside employment violate the ethics ordinance?

"No. Under the council – manager form of government, the Mayor is not a full-time position."

What safeguards are in place to make sure Mr. Taylor is not approving contracts or other city business that involve any of the clients of Kirk and Huth?

"The Mayor does not have unilateral power to approve any contract on behalf of the City. That power rests with the entire City Council. With that said, there are standards set forth in the City Charter, City Code, and Ethics Resolution that safeguard against any potential conflicts of interest."

How many contracts has the city had with Kirk & Huth since Mayor Taylor has been in office?

"There have been no contracts between the City of Sterling Heights and Kirk & Huth.

In the interest of full disclosure, however, the City did engage the class action law firm Edelson PC out of Chicago to pursue litigation against opioid manufactures. Edelson represents multiple municipalities on this issue and Kirk & Huth were hired by Edelson to assist them in representing their other Macomb County clients (Warren, Sterling Heights, and Harrison Township). Edelson’s contracting directly with Kirk & Huth to assist them, was fully disclosed to City Council. Mayor Taylor recused himself from the agenda item, and abstained from voting on Edelson’s contract out of an abundance of caution."

Members of Michael Taylor’s law firm, Kirk, Huth, Lange & Badalementi have donated at least $4,800 to his past campaigns. O’Reilly & Rancilio employees (Kaszubski’s firm) have also donated at least $3,475 to Taylor’s campaign in the past as well.