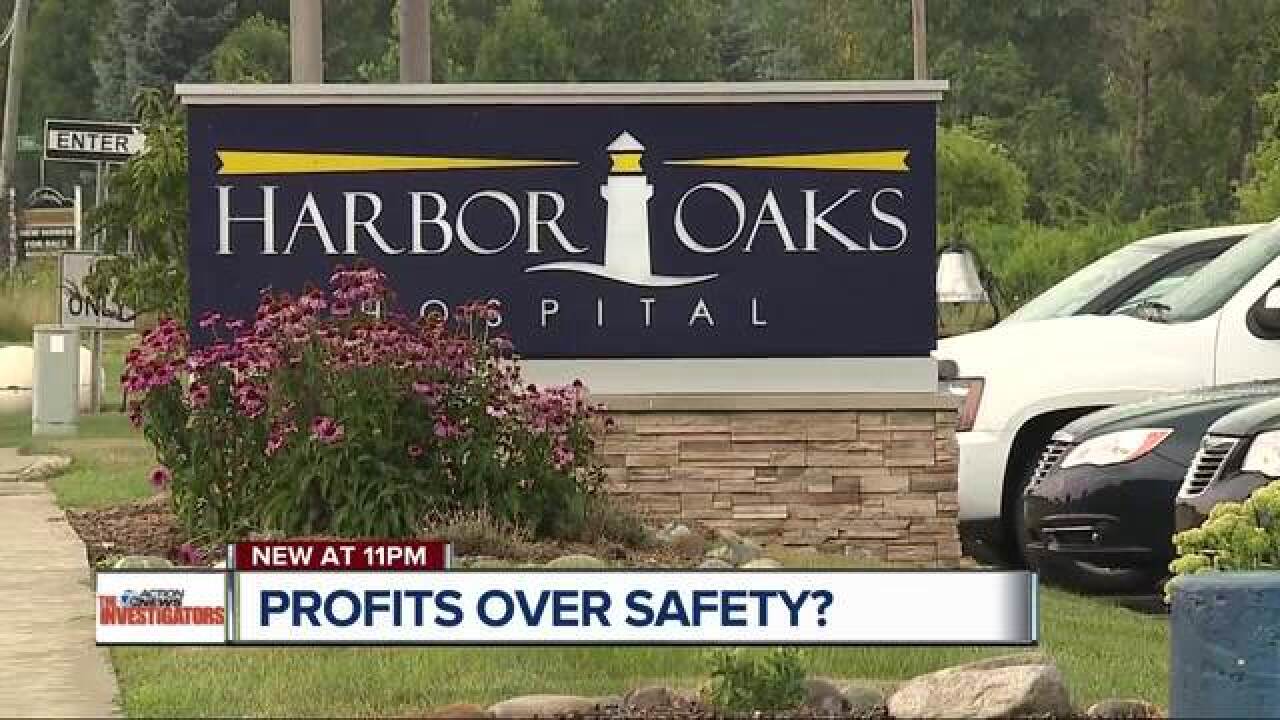 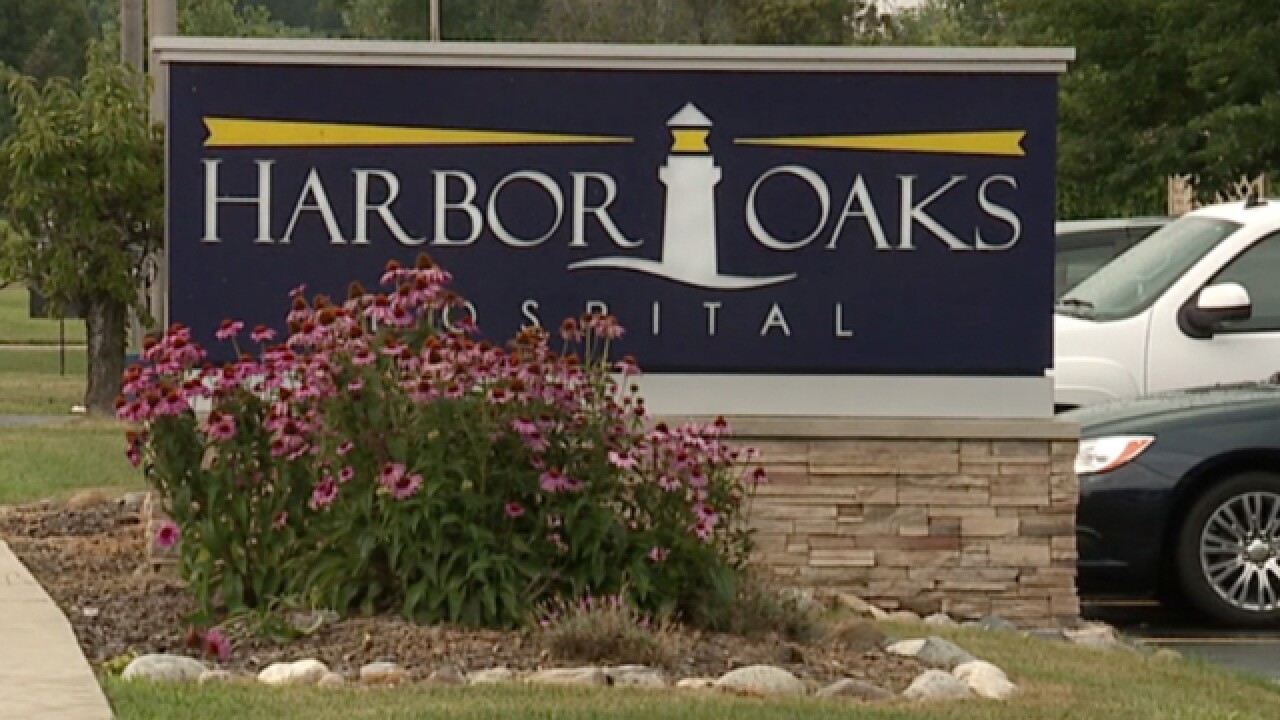 Harbor Oaks Hospital in New Baltimore is one of the largest private psychiatric facilities in Michigan.  And if you believe the accounts of its former employees, it might also be one of the most dangerous.

“There’s lots of psych facilities throughout the country and I don’t think any of them have the standard that Harbor Oaks had,” said Christopher Lax, who was an LPN at Harbor Oaks for three years. “It was dangerous to come to work.”

A months-long 7 Action News investigation reveals troubling findings at a facility trusted to treat the state’s most vulnerable: a pattern of assaults on staff dating back years, repeated allegations of physical and sexual abuse involving patients and cries for help that former employees say went ignored.

“We don’t have enough staff on this unit to deal with what we have,” said Richard Encalade, a former RN at Harbor Oaks.

“They would rather have more money than to make sure their staff was safe,” said Chevy Walker, who worked at Harbor Oaks as a behavioral health technician.

Sikon is one of five former hospital employees telling us they complained repeatedly to management that the hospital was understaffed, putting everyone inside its walls at risk.

“Why do you think they kept turning you down when you asked for more staff?” asked Channel 7’s Ross Jones.

Sikon worked on the hospital’s adult unit and tells us it was not uncommon for Harbor Oaks to staff only five employees to treat the units 32 patients. But with some of those employees busy completing paperwork and dealing with doctors and pharmacists, it sometimes left only two or three staff on the floor: a more than 10 to one patient ratio.

Some of the unit’s patients had dangerous tendencies.

“We literally had someone get stabbed with a pencil because of an aggressive, violent patient, and that patient was known to be aggressive because of his previous admission,” Yax recalled.

Sikon said pleas for help were regularly ignored by managers.

“I was saying openly, people are going to get hurt. This is a problem.  This is a safety issue.  And again, that’s where I got, ‘You need to be quiet, zip it.’” Sikon said.

But report after report filed with the New Baltimore police suggest she was right to be concerned. Scores of alleged physical assaults involving patients abusing other patients have been filed in just the last two years. Other reports detail sexual assaults by patients.

The pain has not been limited to just them.

Chevy Walker says she was attacked by a patient while she was a behavioral health technician for Harbor Oaks.

“I’m getting pounded in my head, in my neck,” Walker said. “I didn’t see it coming.”

She says it took 8 employees to pull the aggressive patient off of her. Bleeding and in pain, Walker says she told her manager she needed to go to the hospital.

“He stated that he needed me to work the rest of my shift,” Walker said.

“So you were just pummeled in the head and neck…and they want you to finish the rest of your shift?” asked Channel 7’s Ross Jones.

The attack on Chevy Walker was not isolated. According to the state’s Occupational Health and Safety Administration, Harbor Oaks has seen 76 cases of staff assaults by patients since 2013.

“I believe that a lot of the things that happened there could have been prevented by having a proper amount of staff,” said Cathleen Kaminski, who spent almost four years at Harbor Oaks as an registered nurse.

This past April, Linna Sikon decided she’d seen enough.  She filed a complaint with the state after one of her colleagues was attacked, writing in part: “There are just not enough of us…please help us!”

Weeks later, she says she was forced to resign.  She believes it was retaliation for blowing the whistle on her employer.

Harbor Oaks CEO Sari Abromovich declined an on-camera interview; we caught up with her on her way into work.

“Ma’am, a slew of former employees say there were not enough staff here to keep staff and patients safe, and when they told you, you did not,” said Jones.

Abromovich wouldn’t answer our questions, but issued a statement saying:

We are proud of our long history of providing exceptional care to our patients and their families in highly structured treatment programs.  Our health care professionals are committed to ensuring the physical and emotional wellbeing of our patients.  We maintain a zero tolerance policy for any action that could endanger the physical or emotional wellbeing of a patient or employee.  Employees found to be in violation of our abuse and neglect policies are immediately suspended pending a full investigation and prompt disciplinary action – including termination – is taken as warranted.  Due to federal and state patient privacy and confidentiality laws, we cannot comment on the specific allegations.

Last month, Linna Sikon filed a wrongful termination suit against Harbor Oaks, saying she says she was terminated for bringing in state investigators. Harbor Oaks declined to comment on why she no longer works there.

In response to Sikon’s complaint, the state’s OSHA investigators cited Harbor Oaks for not providing a safe work environment and discouraging an employee that was assaulted from getting treatment until her shift was over.