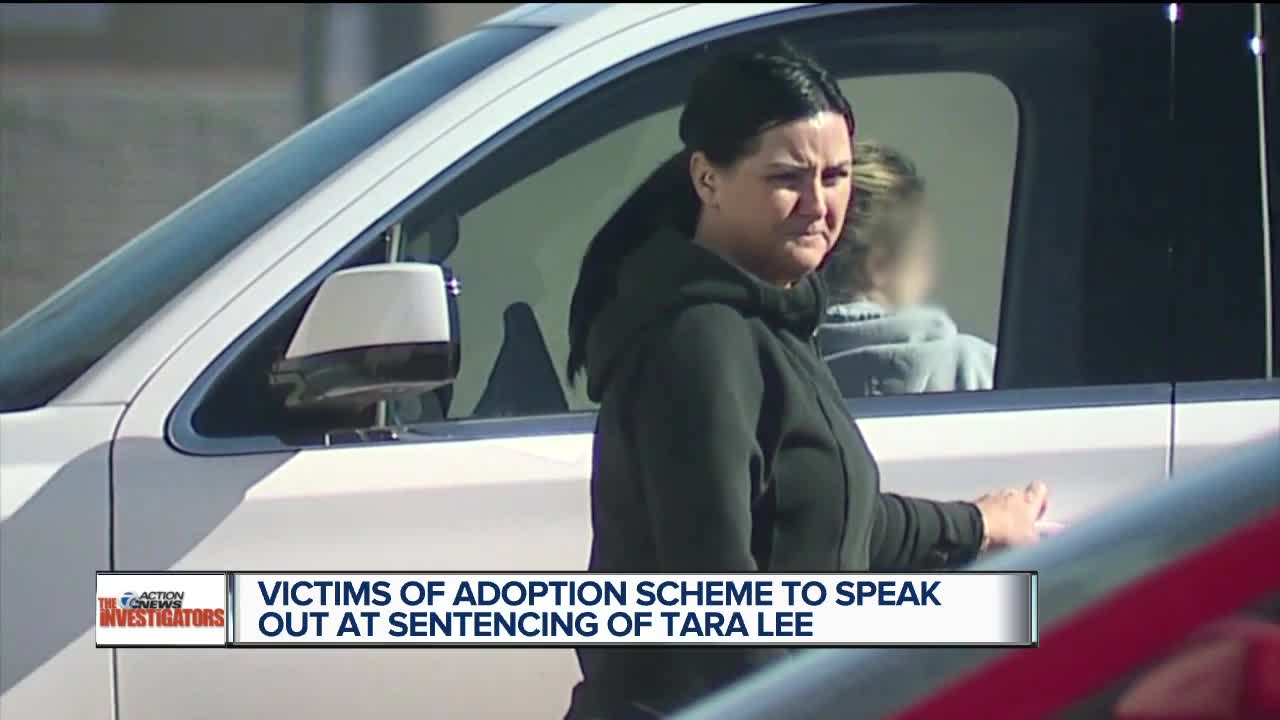 On Wednesday, the Macomb County mother accused of taking in more than $2.1 million dollars from couples hoping to adopt will learn her fate. It was a nationwide adoption fraud scheme first exposed by the 7 Investigators.

(WXYZ) — On Wednesday, the Macomb County mother accused of taking in more than $2.1 million dollars from couples hoping to adopt will learn her fate. It was a nationwide adoption fraud scheme first exposed by the 7 Investigators.

For the first time, dozens of Lee’s victims will be face-to-face with Tara Lynn Lee to tell the judge just how much she hurt them.

“I went through my darkest time because you wanted to line your pockets,” said Moriah Day, who placed her baby for adoption through Lee.

From the birth mothers who say they were manipulated, to the couples who had hoped to adopt babies, the feds say Lee’s path of destruction was breathtaking.

Federal prosecutors say Lee took in at least $2.1 million in adoption proceeds, even though she was never licensed to do that work. The feds say her nationwide adoption fraud scheme impacted 160 couples and 70 birth moms in 24 states.

Last summer, the 38-year-old mother from New Haven pleaded guilty to 2 of the 23 wire fraud charges she was facing. As part of the plea deal, she’s facing 8 – 10 years in prison.

Lee acknowledged in her plea that she made up fake birth mothers, told adoptive couples that babies died when they never existed, and double matched couples with the same birth moms.

The feds say Lee even had her co-defendant, Enhelica Wiggins, pose as a fake birth mom named Shantal during phone calls with couples who gave Lee thousands of dollars to be matched with babies.

Federal prosecutors say Lee spent that money on more than $372,000 worth of luxury goods including jewelry and watches, and called her a “scam artist” who “broke her victims’ hearts, over and over again.”

Lee has been behind bars since last March, after the 7 Investigators showed her violating the conditions of her bond by using a cell phone.

Now her lawyers are asking Judge Bernard Friedman for leniency and they submitted dozens of letters from friends and supporters to the court. They describe her as a woman who would do anything for the birth mothers.

Michael and Teresa Methany could not disagree more.

“This is like, epic like what she did to people,” said Michael Methany. “Her crimes are crimes against humanity.”

“She is a monster,” said Teresa Methany.

The Methany’s say they learned about the FBI probe into Lee’s Always Hope Adoption as they were driving across the country to Detroit when their son, Sam, was born back in 2018.

“I think I cried every day, I so stressed, panic attacks, it was awful,” said Teresa.

The Methany’s say when they arrived in Michigan, they discovered Sam’s biological mom never received the $8,000 they had paid Lee for the mom’s living expenses.

“Tara showed up in the hospital room with a Rolex and a $3,000 bag, meanwhile our birth mom does not have a proper coat or shoes for a winter in Michigan,” said Teresa, who later learned the birth mom’s electricity was about to be cut off.

The Methany’s also say Lee tricked them into missing Sam’s delivery, and they say she demanded more money from them before they could see the baby, who was in intensive care.

“How’s Sam’s biological mom? How’s the baby,” Mike said he wanted to know. “And she was like, so about that money?”

They never gave her that additional money after Sam’s delivery, because of the FBI probe. And while the Methany’s know they are among the rare lucky couples who ended up with a baby, they still travelled all the way from Georgia so they can tell the judge at Lee’s sentencing on Wednesday that she also hurt the birth parents as well as the couples desperate to adopt.

“It was hard to watch these two people who had given us the greatest gift, go through something so emotional, and the hardest decision they will ever have to make in their life, and to see that they were treated terribly, so terribly,” said Teresa.

The Methany’s say their adoption that was supposed to cost around $20,000 ended up costing them closer to $60,000 because of what they say were Tara Lee’s lies.

7 Investigator Heather Catallo will be covering Lee’s sentencing on Wednesday morning, stay with WXYZ.com for updates.