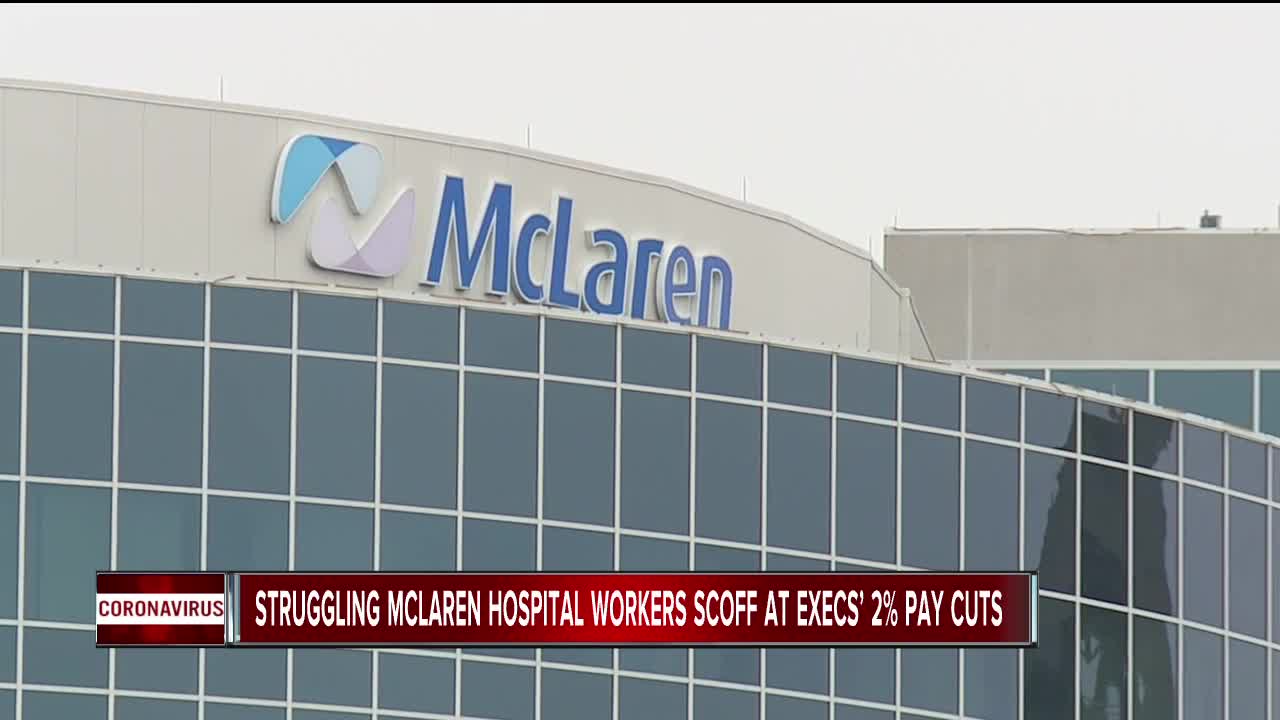 Last week, McLaren announced layoffs for up to 20 operating and recovery room nurses and cut back hours for many of its doctors and physicians assistants.

RELATED: Drop in non-coronavirus services at Michigan hospitals leads to furlough of some staff

“Two percent? That’s nothing,” said Jeff Morawski, a registered nurse at McLaren and President of OPEIU Local 40. “It’s nothing for someone that’s making millions of dollars.”

Kevin Tompkins, McLaren’s senior vice president for marketing, said the 2% cuts represent one week’s salary and are being made by 850 of McLaren’s top executives.

Morawski says a 24-year career in medicine could not prepare him for the last month of COVID-19. He has seen countless patients die and watched colleagues fall ill. Until recently, McLaren workers infected with the coronavirus had to draw from their own paid time off (PTO) bank.

Last week, McLaren gave in to demands for 80 hours of sick leave.

“They have to take care of the people that are taking care of the patients, or they won’t have a hospital,” Morawski said.

The worst moment from the last month, according to the nurse, was escorting a family whose loved one died from COVID-19 to say goodbye. Morawski gathered together enough personal protection equipment for everyone to wear, helped them secure their masks, then brought them to their loved one’s bedside.

“I’ll never forget walking that family up,” he said. “I don’t ever want to have to do that again. That was horrific.”

According to a 2018 filing with tie IRS, McLaren Healthcare CEO Philip Incarnati was paid just under $7 million.

The unions representing McLaren employees are asking company executives to take bigger cuts, capping all salaries at $1 million and putting the rest towards hazard pay or PPE.

McLaren’s Kevin Tompkins said that the company has formed a Front Line Workers’ Fund, where executives can voluntarily make donations that will support hospital medical workers. But as of this week, no donations had been made.

“I anticipate that we are going to have significant contributions,” Tompkins said.

McLaren Health Care supports all of its employees, especially those on the frontline of this crisis, by providing additional PTO and time off benefits from McLaren, as well as access to state and federal benefits, during the state of emergency. McLaren is historically a fiscally responsible organization that has taken proactive steps both prior to and during this crisis to ensure that our employees have job security, even in times of uncertainty such as this. Our staff has stepped up to do what is needed of them from our community and we are committed to taking care of them. Although we have taken measures of limited furloughs and leadership reductions in pay, we have been able to minimize the long-term negative impacts to our employees and have not laid off needed frontline healthcare workers. Some organizations are forced to make long-term financial decisions based on their own challenges. Providing added benefits or making job cuts in a time of crisis can have long term consequences. McLaren is cautious as we make the necessary temporary changes to weather this storm financially. Our goal is to prevent permanent layoffs or reductions and return to normal levels of patient care and staffing over the next several months.