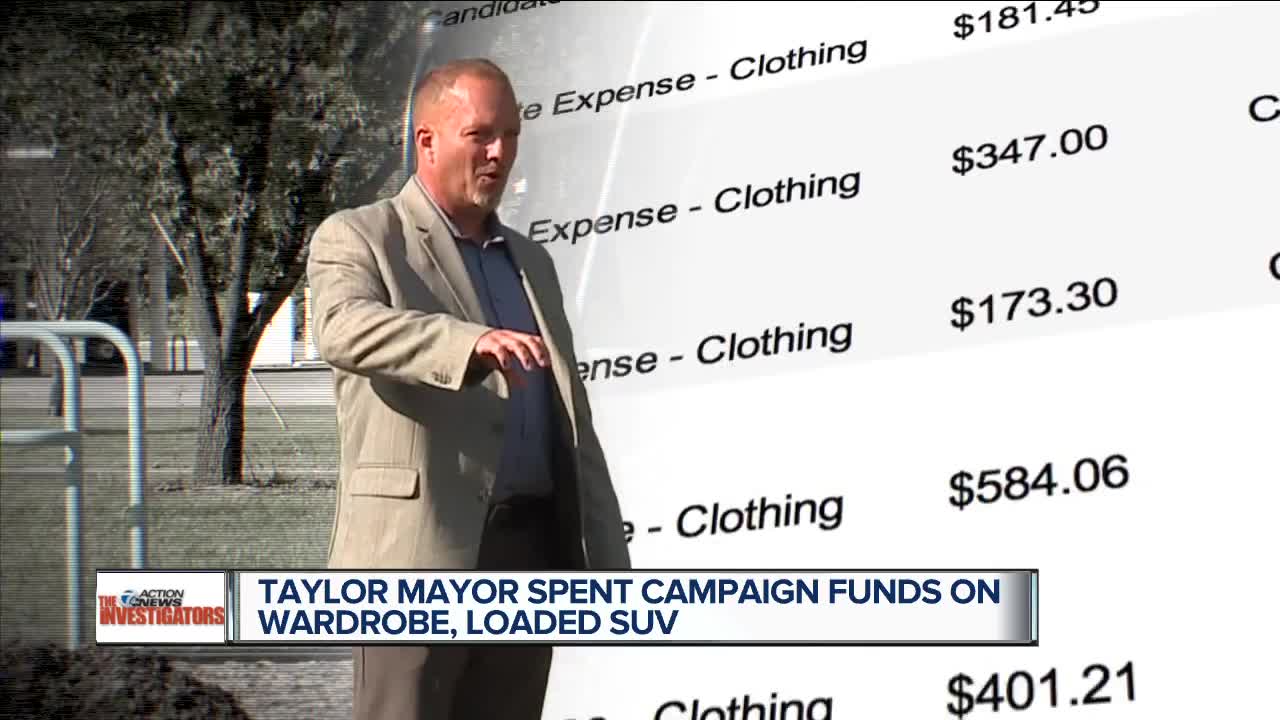 Taylor’s embattled mayor is defending personal use of a loaded SUV and thousands of dollars in wardrobe expenses paid for by his campaign fund. TAYLOR, Mich. (WXYZ) — Taylor’s embattled mayor is defending personal use of a loaded SUV and thousands of dollars in wardrobe expenses paid for by his campaign fund.

Rick Sollars was first elected mayor in 2013, then ran unopposed again four years later. In February, the FBI raided his home and office, leaving with $200,000 in cash and raising questions pay-to-play inside city hall. Sollars has not been charged with any crimes.

But expenses made in plain sight, disclosed in campaign finance expenses, raise questions about whether Sollars is benefiting personally from his campaign war chest.

Records show Sollars also spent $410 at the men’s shoe store Johnston and Murphy. $1,406 at Macy’s, hundreds more at JC Penny’s and Target and another $3,009 at the dry cleaners.

Michigan law says candidates aren’t allowed to benefit personally from their campaign funds. From 2017 to 2018, Sollars spent $8,484 on just his wardrobe.

“If you’re buying suits and shoes with campaign funds, that seems like a personal benefit,” said Channel 7’s Ross Jones.

“Well, they are suits and shoes that I wear to work as part of my clothing attire for my position,” Sollars said.

“Everyone has to wear clothes for their jobs. Why is it that you don’t have to pay for a lot of them?” Jones asked.

“Well, we thought we were doing it correctly,” Sollars said.

In a statement, Sollars’ attorney called the wardrobe expenses “modest” and “ordinary,” saying Michigan law does allow for candidates to pay for “incidental expenses” to holding office. While we couldn’t find a candidate who’s spent more on his clothing expenses than Sollars, he doesn’t appear to be the only one.

Taylor City Councilman Tim Woolley shows multiple spending sprees at DXL and Macy’s, which he said was proper because it was an expense for clothing he wears to work. Fmr. Highland Park Mayor DeAndre Windom’s campaign shows hundreds spent at Todd’s Clothes and Marshalls, too. Reached by phone, Windom say she doesn’t recall the purchases.

But campaign finance experts we talked to say any candidate spending on personal clothing could run into trouble with the Secretary of State.

Former Michigan Elections Director Chris Thomas said he couldn't think of a justification for billing personal clothing to a campaign, even if a public official wears the clothing to work.

"There are several categories that are permissible," he said "and nowhere is personal clothing included."

Sollars campaign statements were filed with the Wayne County Clerk's Office. According to spokesman Lisa Williams, the office's role is to "give a cursory review 'on its face' to assure that the report is filed in its entirety and timely."

If impropriety is alleged, it would be investigated by the Secretary of State.

“That money was donated to get him elected, and not to put him in a lifestyle beyond everybody else,” said Taylor Councilman Butch Ramik. "Is it really the right thing to be doing? Spending that kind of money and maybe living beyond your means?"

But the campaign hasn’t just paid for Sollars’ wardrobe. According to filings, it's also paid for a top-of-the-line vehicle, too: a 2017 Chevrolet Suburban LT Premier, which retails for $72,000.

Sollars’ campaign paid to lease it for just over $1,000 a month, plus $2,900 to insure it. Michigan law allows campaigns to pay for vehicles if they’re used for campaign or government work.

“So you’ve never used this vehicle for personal use?” Jones asked.

“No I have,” Sollars said. “And I charge back a percentage of it for my tax returns.”

Sollars told us he estimates 20-30% of his use of the SUV is for personal use, like driving around his family of five. Neighbors near Sollars’ vacation home 60 miles away say he’s driven it there, too. But Sollars never paid back the campaign for personal use, which is required by law.

“I use is sporadically, I take my kids to school and I pick them up from school and baseball and other than that I don’t do much, I’m here a lot,” Sollars said.

“There’s a lot of people that would be violating that, other than just me. But we did check with the county clerk that says it can be done,” Sollars said.

“It actually says it can’t be used for personal use,” Jones responded.

“Okay, well I’ll have to look at that,” Sollars said.

In May, Sollars said he personally took over payments for his $1,000 a month Chevy Suburban. He didn’t say why.

“You cannot use your candidate committee funds for a personal use,” he said.

In a statement, Sollars' attorney says the campaign "is evaluating these historic uses and will make any corrective action/refunds to the extend required by law.”

He says he believes Sollars’ estimate that he used his campaign-leased SUV for up to 30% personal use is “high.”