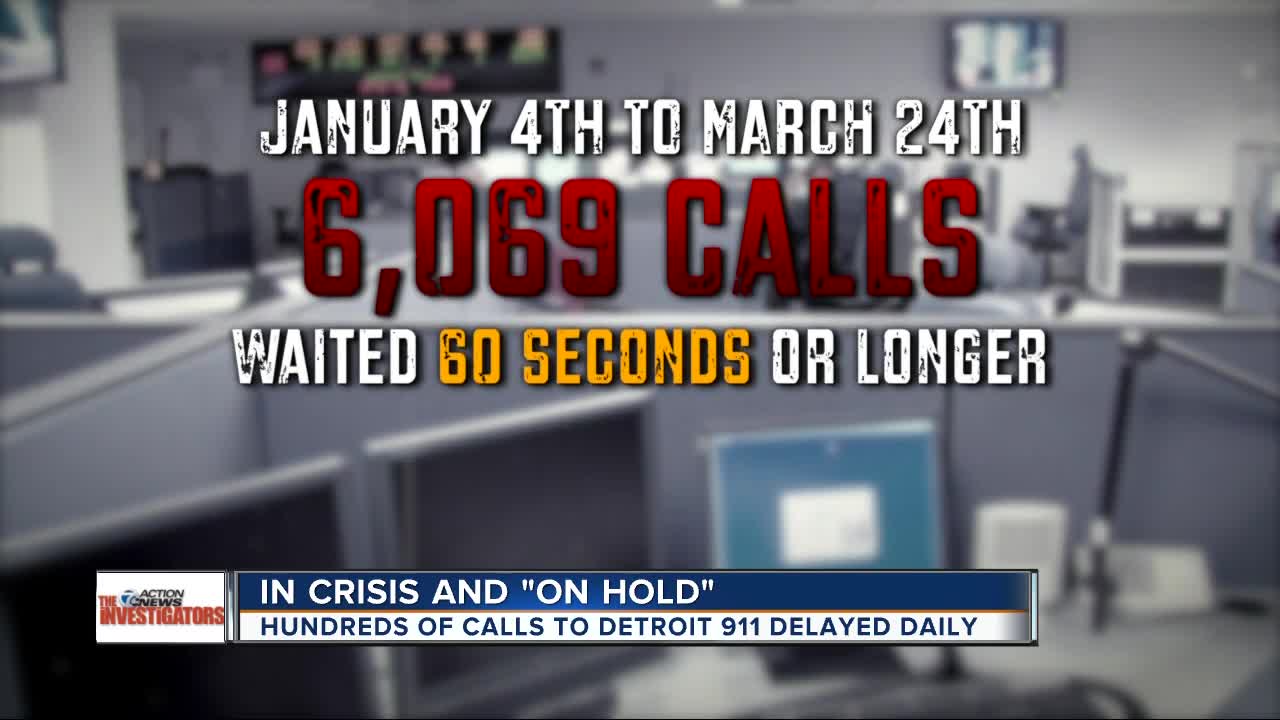 From January through March, nearly 1,000 callers waited two minutes before their call was answered.

Struggling to breathe and unable to stand, the Detroit mother had just dialed 911 in need of an ambulance. But instead of hearing a live voice on the other end of the line, she heard a recording.

“All operators are handling emergency calls,” said the automated message. “Remain on the line.”

Already in a panic, Triplett said she was in disbelief.

“I’ve never heard that before,” she said. “I thought I called the wrong number, honestly.”

The wait went from seconds to minutes, she said.

After waiting what felt like a few minutes, she said, a call taker answered the line and ultimately sent an ambulance to her home.

“If I couldn’t breathe or talk, imagine if I just passed out here,” she said. “Who’s going to save me?”

While calls like this aren’t the norm in Detroit, they are far from unusual. Through the first three months of 2019, some 500 calls a day to 911 were answered not by a call taker, but by an automated message.

Hear the automated message below

More than 6,000 calls lingered for 60 seconds or more before being answered by a call taker; another 980 callers sat for two minutes or more.

“Because people call 911 when they’re in crisis, it really wouldn’t be appropriate for me to say that that’s acceptable,” said Assistant Chief James White.

The depth of the problem was not fully understood by DPD officials until repeated inquiries by 7 Action News, dating back to December. The requests prompted officials to extract 911 call data, revealing the breadth of calls being diverted to an automated message, and the length they lingered.

White says the city’s goal is that no call to 911 is delayed, but that in a major city like Detroit, that just isn’t possible.

When highly-visible crimes like last month’s shooting in Greektown happen, scores of people will call 911 reporting the same single crime. That jams up the phone lines, leading callers to wait — including those reporting completely different emergencies.

That’s what Lamaria Wright was doing last July when her mother suddenly collapsed.

“She couldn’t get up, she was just slumped over,” Wright said. “I was screaming: ‘Mom! Mom! Is you okay?’ I called EMS and I got the answering machine.”

Like so many who’ve heard the automated response, Wright at first thought she had misdialed. She hung up and called again.

After what Wright estimates was at least five minutes, a call taker answered her call. But by then, her mother was worse.

“She was having a seizure,” she said. “She ended up brain dead the next day, and then she was gone."

In March, Detroit Mayor Mike Duggan responded to our investigation into other problems with 911, and said delays in responding to calls shouldn't happen.

“Do we have issues with the calls?” Duggan asked. “I don’t think a call to 911 should go to hold. Do we have enough call takers?”

The short answer: no.

Today, the city is short seven call takers, but at its lowest point this year, it was down 24 call takers short. Assistant Chief White blames attrition for the vacancies, but says the city is is poised to add a class of 12 in the coming weeks.

Armed with the new data yielded by our investigation, DPD has already added more staff during peak calling hours to better meet demand for calls. Now instead of 500 callers hearing the “on hold” message, the average today is closer to 400.