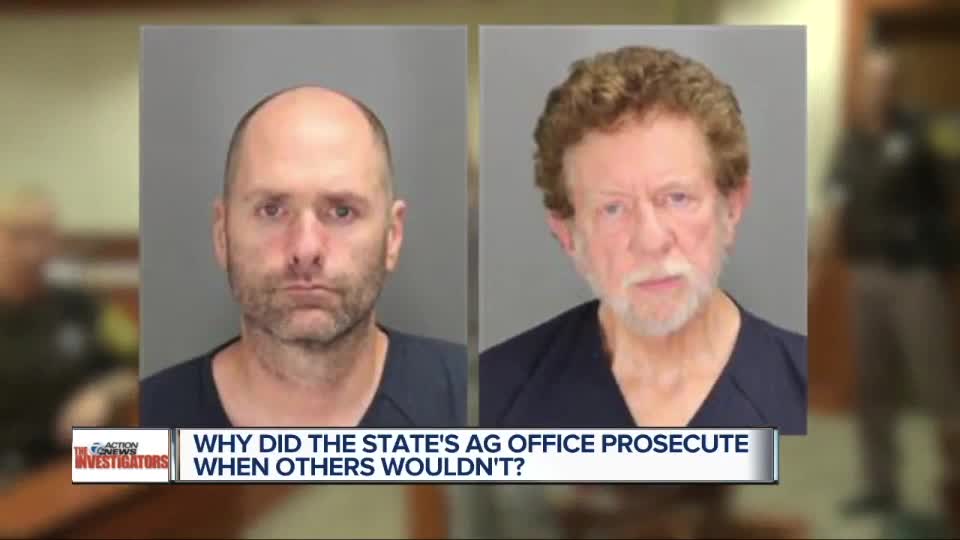 Michigan’s Attorney General charged a police officer and his stepdad with sexually assaulting the officer’s daughter. But, the 7 Investigators have learned there are serious questions about how and why this case got to Dana Nessel’s desk, after a police department located 45 minutes away from where the alleged crime took place got involved.

(WXYZ) — Michigan’s Attorney General charged a police officer and his stepdad with sexually assaulting the officer’s daughter. But, the 7 Investigators have learned there are serious questions about how and why this case got to Dana Nessel’s desk, after a police department located 45 minutes away from where the alleged crime took place got involved.

Sean and Larry have been behind bars since early May, accused of horrific crimes they say they did not commit. They have not been able to post a $250,000 bond as they await a preliminary examination hearing. 7 Action News is not using their last names because they’re accused of molesting Sean’s 8-year-old daughter, allegedly when she was around 3 or 4 years old.

According to search warrants, the alleged assaults took place inside Larry’s home in Oxford, where Sean would have parenting time.

Sean’s lawyer says he’s a decorated police officer, most recently working as a lieutenant for Duval County Schools in Florida. His ex-wife, Johanna, lives in Oxford with their daughter.

Back in 2016, lawyers say as part of the divorce agreement, Sean was just about to get more parenting time with the little girl when Johanna called the Oakland County Sheriff’s Office to allege sexual abuse.

“She did not want her daughter to spend any time or have any life with her father,” Shannon Smith, Larry’s defense attorney, said.

The sheriff’s detective spent four months investigating; Sean passed three polygraphs, including one administered by a former top Michigan State Police Lieutenant, and one given by the Oakland County Sheriff’s Office.

The Oakland County Prosecutor reviewed the evidence, including a key audio recording.

Within days of the criminal case starting, Sean recorded Johanna as she tried to get him to terminate his parental rights with what she called her “gift to him” – dropping the case.

“Right now you have an opportunity to make this go away. Do you understand that?” Johanna said on the recording.

She’s also heard on the recording saying, “I can give you a get-out-of-jail-free card and I can help you.”

Police reports show, when the detective told Johanna that the Oakland County Prosecutor was not pursuing charges, she leveled new allegations.

“On the phone, in the very same call where they called her to tell her it was not being charged, she said, ‘Oh by the way, my daughter also made allegations a few days ago against her grandparents,’” Smith said.

Both Larry and his wife were investigated. They each passed three lie detector tests as well. And even though Larry is a convicted sex offender from a 2010 case involving a teenager, once again, the Oakland County Prosecutor declined to prosecute due to a lack of physical evidence and the polygraph results.

“When I see Oakland County not charging a case, I believe that sends a message that whatever did come in to them was a bad case,” Smith told 7 Investigator Heather Catallo. “I find them to be one of the most aggressive prosecutor’s offices I ever run into.”

Later in 2016, Sean and Johanna battled it out in the family courts in Florida, where a judge ruled that their child’s statements were not reliable; therapists also testified the child had been coached and influenced by her mother.

In 2017, police reports show Johanna tried starting another criminal case, this time with the Michigan State Police Lapeer Post. They too declined to pursue charges.

In August of 2018, lawyers say Johanna took her daughter to six counseling sessions that were videotaped where the child allegedly claimed abuse.

“Do you consider those to be forensic interviews?” Catallo asked.

“I do not… [These] were not done following the Michigan protocol,” Smith said.

A few months later, Johanna found her way 40 miles south to the Center Line Public Safety Department, even though nothing is alleged to have occurred in Center Line or Macomb County.

“I have never had a situation where a detective has compiled anything for a citizen on an investigation that is not theirs,” said Mariell Lehman, who also represents Larry.

Michigan State Police reports obtained through the Freedom of Information Act show Detective Gerald contacted the Attorney General’s office because Center Line had no jurisdiction in the case.

Myszenski refused to tell the 7 Investigators who his detective spoke to at the Attorney General’s Office, but MSP officials did tell us that the Assistant Attorney General who asked them to investigate was a man named Brian Kolodziej.

Kolodziej is the same Assistant Attorney General who recently resigned after admitting to an inappropriate relationship with a victim in a different sex crimes case in Isabella County. Now Kolodziej is under criminal investigation.

Emails obtained by the 7 Investigators raise questions about Kolodziej’s conduct in this case as well.

A few days before the trooper got a search warrant for Larry’s house, Kolodziej sent an email to him that said, “We’ve confirmed that my grant prohibits my involvement at this time. That’s why I’m working off hours on this.”

“I have not heard of a county prosecutor, or a state prosecutor or an assistant attorney general working off hours on anything, on any cases,” Lehman said.

That same email from Kolodziej indicates that “AG Nessel must approve” the warrant."

The search warrant was signed on March 7. Kolodziej writes in the email that the “suspect,” meaning Sean, “is scheduled to have visitation” that upcoming weekend at Larry’s home in Oxford.

In the week following the raid on the grandparents’ home, another email raises questions about Johanna’s contact with Kolodziej.

Johanna emails the Center Line detective some family court documents from the Florida custody battle, saying, “Mike can you indirectly get these to Brian?” A few days later, Det. Gerald forwards the email to a Gmail account that appears to belong to Kolodziej.

“Have you seen prosecutors use their personal email accounts before?” Catallo asked.

“I have never had a prosecutor use their personal email account,” Lehman responded.

“Do you have concerns that there was something inappropriate that happened here?” Catallo asked.

“I believe we’ve always had concerns that there’s something awry about this case,” Lehman said.

The 7 Investigators did try to reach Johanna and Kolodziej, repeatedly. Kolodziej’s attorney told us they won’t be commenting.

This case is now part of the Attorney General’s internal review of Kolodziej’s work.

“As our office announced on September 10, each of the cases former Assistant Attorney General Brian Kolodziej handled during the approximate year he was employed by the Department of Attorney General are undergoing a comprehensive investigation and review. This includes [this] case. Our review has already identified clear and serious violations of professional and ethical protocols that occurred while this case was being handled by Mr. Kolodziej.

“We have made disclosures to the complainants, the defendants' attorneys and the court consistent with our ethical obligations as our internal investigation has moved forward. Our investigation will conclude shortly, and at that time a full report will be made available to the public. In the meantime, our office is working diligently to honor our commitment to transparency and accountability as we continue to investigate this matter.”

Late Thursday, 52-3 District Court Judge Nancy Carniak lowered the defendants’ bond, after the new Assistant Attorney General assigned to the case asked for an emergency hearing. During that hearing, the AG’s office disclosed to the court that the officer in charge of the case from the Attorney General’s office “gave what has been determined to be inaccurate and untruthful statements as it pertains to her testimony.”

“Sean and I are just eternally grateful that the Attorney General’s office and Attorney General Nessel are taking seriously the obligation to thoroughly investigate Brian Kolodziej and the cases on which he worked. And clearly they are thoroughly investigating and we’re just thankful that everything they are uncovering that is problematic within [this] case that they are bringing it to us as they discover it,” said defense attorney Alona Sharon after the emergency hearing.

Here are some of the questions we still have for the Attorney General:

Why did the AG authorize this warrant?

Why did no one ask for the files from the Oakland County Prosecutor’s office?

Why did this case get charged without the AG's office having all of the records and evidence?

Did any of the senior staff at the AG’s office ask why Center Line police were involved in this, despite their lack of jurisdiction?

What is Johanna’s relationship with Brian Kolodziej? Did she know him prior to this case starting?

What kind of grant was Kolodziej working under as of March 5, 2019 that prohibited his involvement in this case?

When was he authorized to work on this case?

Why did he work “off hours” on this case?

If he was prohibited from working on it, why did Kolodziej contact Trooper David Busacca to take the case?

What is your policy on the use of personal email accounts by Assistant AG’s?

Why did Kolodziej, Special Agent Lauren Schipani, and Trooper Busacca continue to meet at Center Line to prepare for the bond hearings as late as 7/31/19?

Why did Kolodziej ask the CenteCenter Linerline detective and the Center Line chief to attend the bond hearings and preliminary exam?

Read the letters from Center Line police to the Oakland County Sheriff's Office, and the response from the sheriff's office, below.