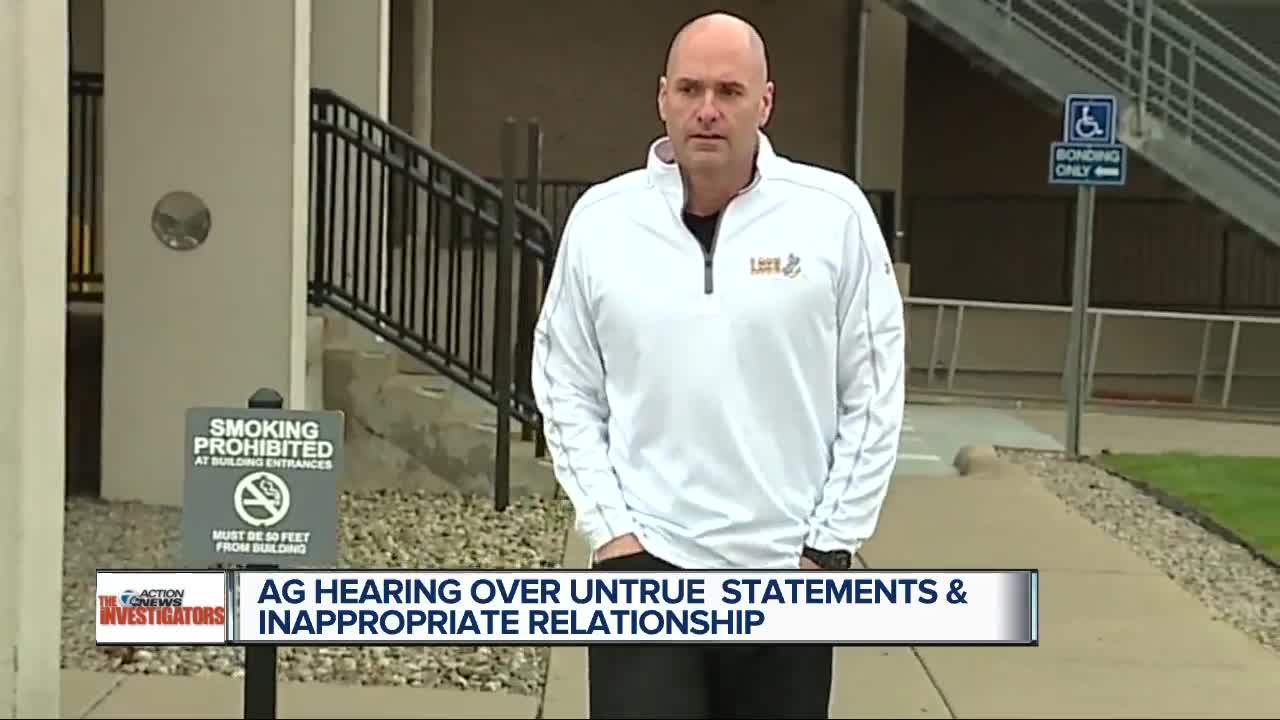 Untruthful statements under oath and another inappropriate relationship – those are the reasons the attorney general had to call for an emergency hearing in a case that 7 Investigator Heather Catallo has been investigating for months.

(WXYZ) — Untruthful statements under oath and another inappropriate relationship – those are the reasons the attorney general had to call for an emergency hearing in a case that 7 Investigator Heather Catallo has been investigating for months.

There have been questions from the very start about the protocols that appear to have been broken in this prosecution. Now, even more disturbing information is coming to light in this alleged sex crimes case.

In May, Michigan Attorney General Dana Nessel charged a cop and his stepfather with criminal sexual conduct.

We’re not using their last names to protect the identity of their alleged victim – because Sean and Larry are accused of molesting Sean’s young daughter.

They both passed three polygraphs and the Oakland County Prosecutor refused to charge them because of a lack of evidence – but years later, the Attorney General’s Office moved forward on the case.

Now, the AG’s case is coming under fire with concerns of potential perjury and an inappropriate relationship.

"It is my ethical obligation to supplement the court and inform defense counsel about this information," Assistant Attorney General Robin Liddell said in a hearing on Thursday.

Just hours before our investigation was set to air Thursday – an Oakland County judge held an emergency hearing where the AG’s office made a stunning announcement about their special agent assigned to the case.

"It has also come to the light of the department that same officer in charge had an inappropriate relationship with the former assistant attorney general that was assigned to prosecute this case," Liddell said.

That former assistant attorney general is Brian Kolodziej. Nessel announced in September that Koloziej was forced to resign after admitting to an inappropriate relationship with a victim in an entirely different sex crimes case from Isabella County.

The AG’s office also alerted the judge that the special agent gave untruthful statements during her testimony at the 3-day bond hearing for the defendants.

The 7 Investigators were the first to uncover emails from Kolodziej that raise questions about why he was working on the case when his grant didn’t allow for it, including working “off hours.”

"So this leaves open a question of whether or not we have all of his correspondence regarding this case with the defendants," Alona Sharon, a defense attorney said.

"I want to ensure that it’s on the record we have concern for our lives," Johanna said.

Sean and I are just eternally grateful that the attorney general’s office and Attorney General Nessel are taking seriously the obligation to thoroughly investigate Brian Kolodziej and the cases on which he worked," Sharon said.

With the reduced bond, on Friday, Sean was released from the Oakland County Jail after five months in solitary confinement.

"They will continue to vehemently deny the allegations against them and we prepare a very strong defense in this case, and we will just continue to move forward, but it is always easier to prepare a case when your clients are not incarcerated," Sharon said.

"From our perspective, we have no interest in making this case a rush job, and it just seems that with every passing day we learn more troubling information, at least as it relates to the conduct of former Assistant Attorney General Brian Kolodziej, and the more tainted his conduct is the more tainted the investigation is," Sharon added.

The other defendant is expected to be released on bond Friday as well. The internal investigation into this case continues at the Attorney General’s office.

Heather did speak with Brian Kolodziej’s attorney, he has no comment about this.

There is also a criminal investigation underway into Kolodziej’s alleged actions, as well as internal reviews at the two other prosecutors offices where he worked.

“As our office announced on September 10, each of the cases former Assistant Attorney General Brian Kolodziej handled during the approximate year he was employed by the Department of Attorney General are undergoing a comprehensive investigation and review. This includes [this] case. Our review has already identified clear and serious violations of professional and ethical protocols that occurred while this case was being handled by Mr. Kolodziej.

“We have made disclosures to the complainants, the defendants' attorneys and the court consistent with our ethical obligations as our internal investigation has moved forward. Our investigation will conclude shortly, and at that time a full report will be made available to the public. In the meantime, our office is working diligently to honor our commitment to transparency and accountability as we continue to investigate this matter.”