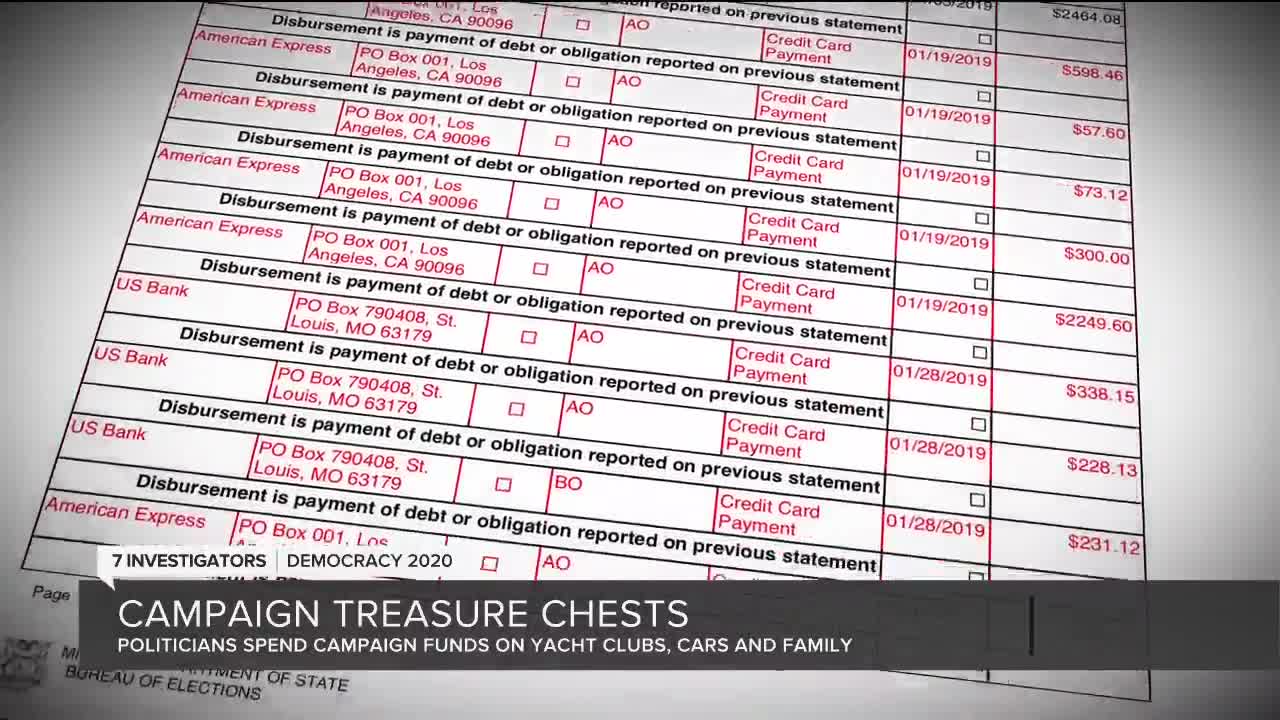 From hiring family members to paying for yacht club and gym memberships to purchasing costly vehicles, elected officials are using their campaign war chests in ways that often have little to do with campaigning. 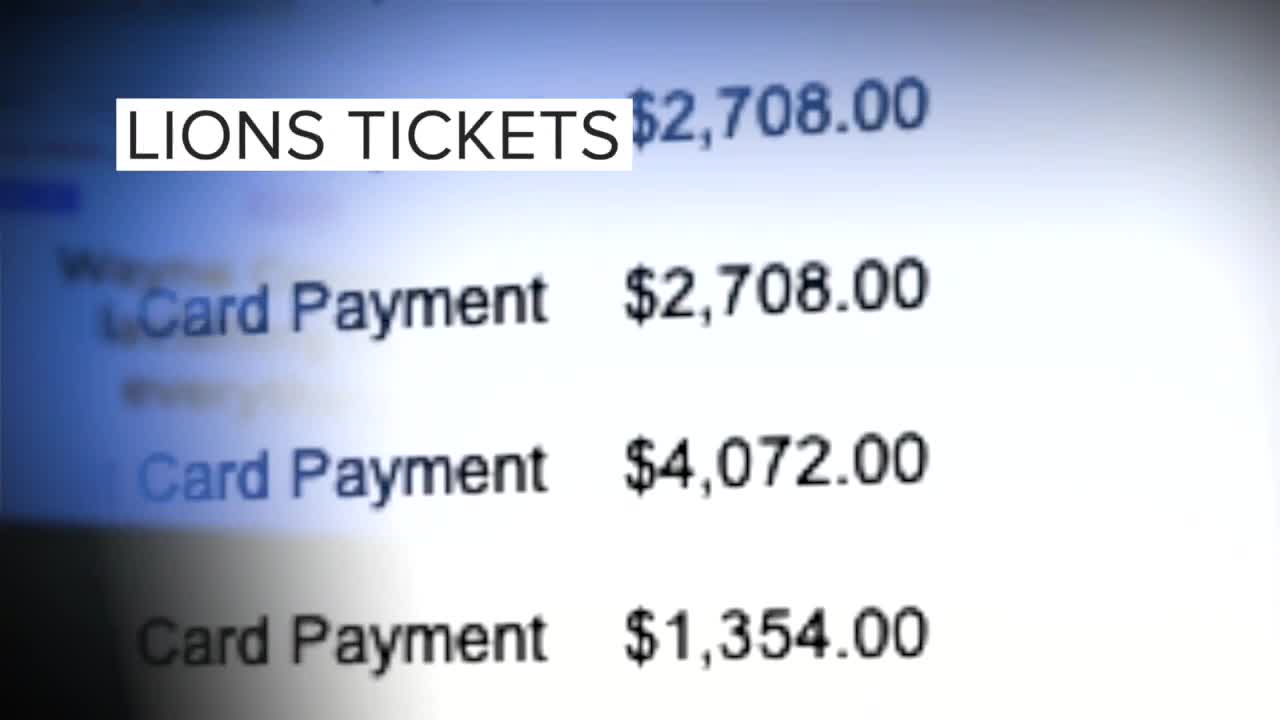 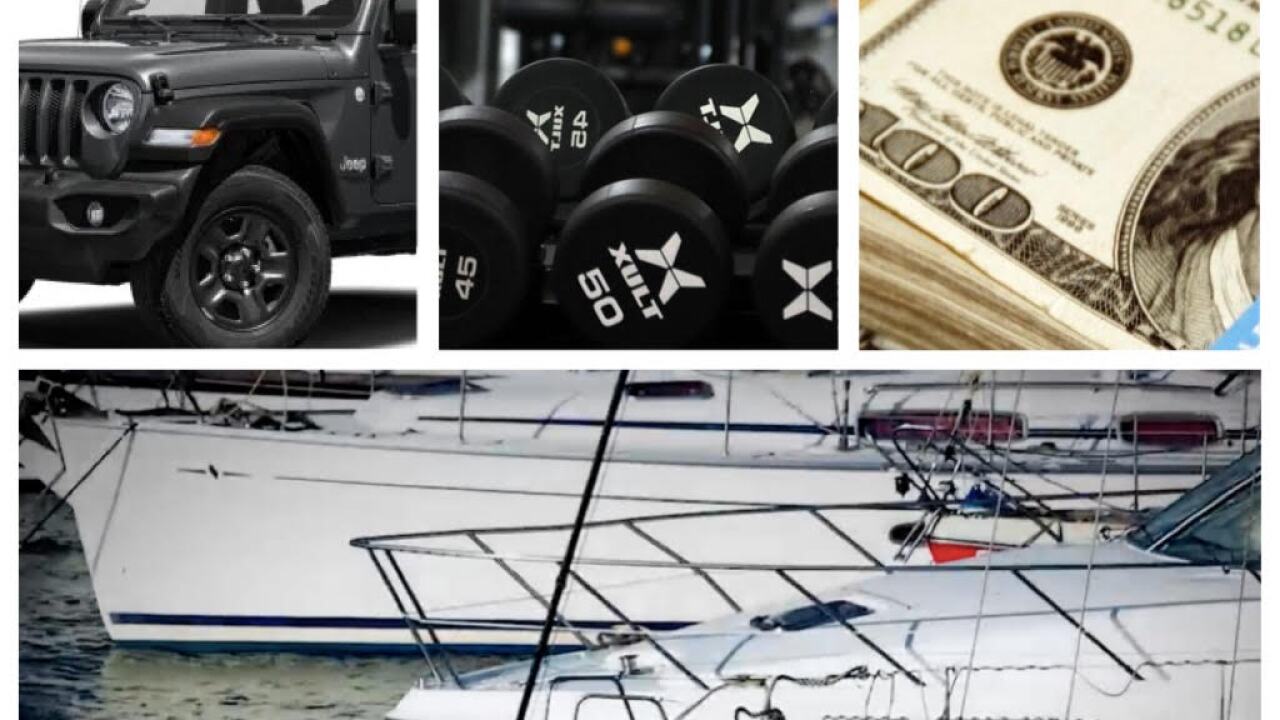 (WXYZ) — From hiring family members to paying for yacht club and gym memberships to purchasing costly vehicles, elected officials are using their campaign war chests in ways that often have little to do with campaigning.

The expenses, part of 7 Action News Investigation into campaign expenses accounts throughout Michigan, demonstrate how little is ever questioned by state or county regulators.

Director of the Michigan Campaign Finance Network, adding that state law allows for politicians to “use the guise of elected office to essentially live a lavish lifestyle.”

In Wayne County, Sheriff Benny Napoleon’s campaign expenses are littered with payments that seem to primarily benefit just him.

As the Metro Times first reported in August, the expenses include lavish meals at steakhouses, hotels across the country and expenses like his personal gym membership.

“Don’t I need to stay healthy?” Napoleon said, adding that it’s “in the best interest of the county” that he be in top shape.

“What better retail politic is there for a person than to say: ‘Hey, I got a chance to talk to Benny Napoleon today! He’s an alright guy. I think I’m gonna vote for him,’” Napoleon said.

“But isn’t that just a part of being a public official?“ asked Jones. “People are going to see you and recognize you and you still have to pay for your Lions tickets?”

“Again, I think there’s no better retail politics,” Napoleon said. “I get a lot of bang for the buck for that.”

Shuster says say campaign spending is barely policed by county clerks, due in part to short staffing, and that the rules as they’re currently written can allow for a lot

“I think it’s really difficult to defend those things,” Shuster said, “but again, the vagueness of our campaign finance law makes it easy to get away with that kind of spending.”

Most government jobs don’t allow elected officials to hire a family member, but their campaigns aren’t governed by the same rules.

In his runs for Detroit Mayor, Mike Duggan paid two of his children as consultants: his daughter Carolyn collected $4,000 for social media work and in the next campaign, son Patrick took in $10,500 for performing data entry.

The Duggan campaign said Patrick was paid $10 an hour.

Wayne County Executive Warren Evans hasn’t had a serious challenger since 2014. But since 2016, he’s paid his daughter Nikki to manage his campaign to the tune of $288,000.

A spokesman for Evans declined comment on the payments.

Taylor Mayor Rick Sollars has charged nearly $9,000 in clothing expenses to his campaign fund, plus the lease of a $1,000/month Chevrolet Suburban that he admitted using for personal trips in addition to his mayoral duties.

Following a 7 Action News investigation in 2019, Sollars reimbursed his campaign for the questioned clothing expenses. In December, he was indicted for bribery and fraud, including siphoning off thousands from his campaign for personal use.

But few candidate's expenses raise as many questions as Romulus Mayor LeRoy Burcroff’s. Our cameras saw him stepping out of a $44,000 Jeep Wrangler, paid for with campaign money.

Michigan law allows for expenses like vehicles so long as they’re used in an officer holder’s official duties. It’s at least the second vehicle he’s paid for with campaign funds.

Burcroff’s family shows up all over his campaign statements, too, with thousands in payments made to his children, his brother, even his son-in-law for things like “office rent’, “campaign office maintenance” and “charitable donations.”

Burcruoff is also using his campaign fund to pay for $3,800 in memberships to the Belleville Yacht Club, plus thousands more listed as “donations.”

After Channel 7’s Ross Jones called the mayor in September to ask about these expenses, Burcroff blocked his number. He also ignored repeated messages left as his office.

Jones then showed up to the next city council meeting held on Zoom. While the mayor was present, he turned off his camera when Jones attempted to ask him a question during the public comment portion of the meeting.

Last week, Channel 7 caught up with Burcroff outside city hall on his way into work.

“Why are you paying members of your family, sir? Jones asked.

Burcroff didn’t offer any explanation for the questioned expenses, including other curious payments made to the Belleville Yacht Club.

The next day, as photos posted to Facebook show, the Burcroffs were seen celebrating their daughter’s wedding at the Belleville Yacht Club.

Burcroff did not respond to questions about whether his campaign fund paid for any portion of his daughter’s wedding before entering city hall.

Still, even more questions remain. There are scores of mystery payments that Burcroff and plenty of other candidates make using their campaign credit cards. While they’re required to itemize just what those payments are for, so many don’t.

Campaign fund violations are determined by Michigan’s Secretary of State, which normally only investigates expenses if a complaint has been made. Most violations are resolved through repayment or fines.