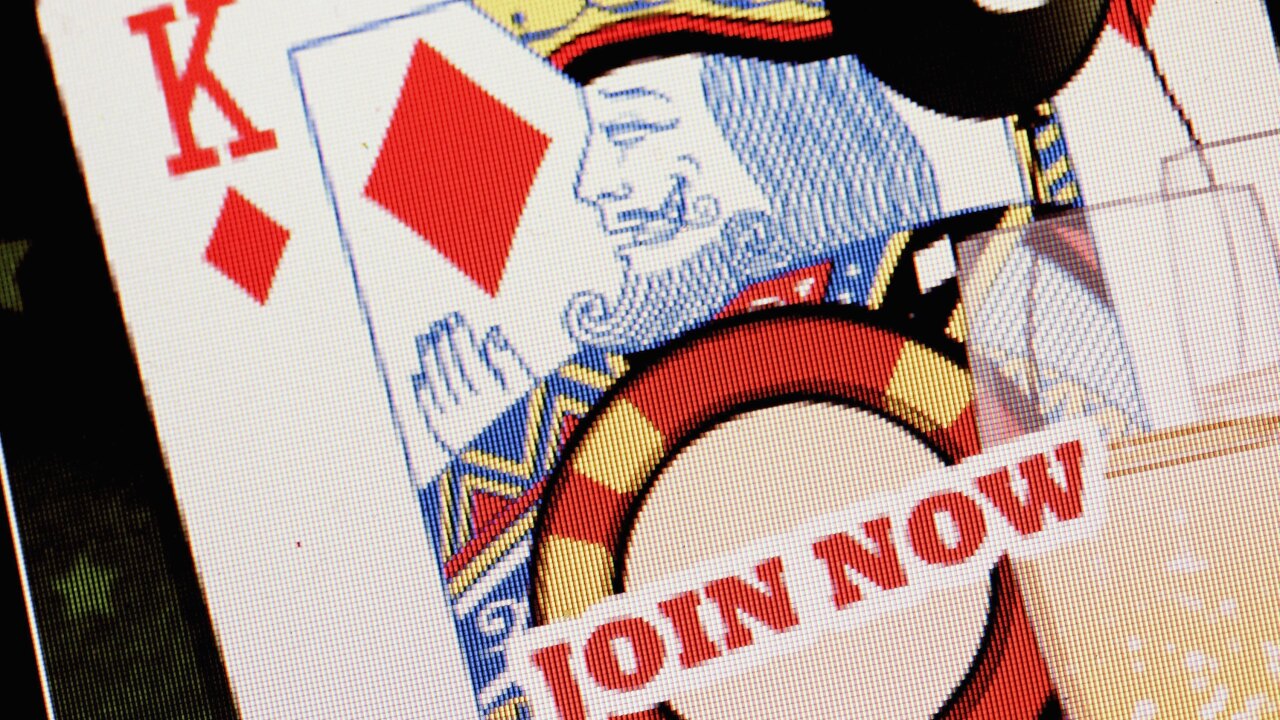 Bruno Vincent/Getty Images
LONDON - AUGUST 07: In this photo illustration a "join now" button is displayed on a screen on an online gambling website on August 7, 2006 in London. Online gambling is one of the fastest-growing UK business sectors with nearly a sevenfold increase in the amount of betting in the UK since 2001. (Photo Illustration by Bruno Vincent/Getty Images)

LANSING, Mich. (AP) — The Republican-controlled Legislature raced early Friday to legalize online gambling and pass a $1.3 billion budget bill that would allocate more for roads and environmental cleanup, despite criticism that it would use money that otherwise should go to Michigan schools.

The supplemental budget legislation — up for consideration in the closing hours of a final marathon lame-duck session day — was the last chance for GOP Gov. Rick Snyder and many lawmakers to put an imprint on state spending before they leave office. The gambling measures would make Michigan the fifth state where online wagers are legal.

An 8 percent tax would be collected from wagers, minus winnings paid out — which would be less than a 19 percent tax now paid by Detroit's three casinos. Those casinos could seek an internet gambling license. Michigan's 23 tribal casinos could conduct online gambling if they secure authorization from the state through a compact.

One contentious budget-related bill — approved 56-51 along party lines with some House Republicans joining Democrats in opposition — would permanently dedicate $69 million a year to Snyder's proposed "Renew Michigan" plan for cleaning up contaminated sites, addressing man-made chemicals known as per- and polyfluoroalkyl substances, or PFAS, and boosting recycling and waste management. The funding in part would replace a voter-approved bond issue that is drying up. It is a backup plan after legislators rejected Snyder's call to increase the state fee to haul waste to landfills.

The measure also would boost road construction spending by more than $100 million and is part of a multi-bill package that totals more than $1.3 billion more in spending or savings. The state would hire 175 additional child protective services caseworkers following a scathing audit and spend $30 million to put more mental health professionals in K-12 schools under the main bill, approved 84-23 in the House.

Tax collections are up due to the economy and a U.S. Supreme Court ruling that enabled the state to collect taxes on more online purchases. Democrats and school districts blasted the bill because the online tax windfall — including $141 million this fiscal year and $174 million next year — instead would be redirected to roads and environmental spending through an adjustment in income tax revenue that goes to schools.

"We should have not to choose whether we want to provide Michiganders with clean water or adequately fund their public schools," said Rep. Darrin Camilleri, a Democrat from Wayne County's Brownstown Township. He said schools cannot afford to lose out on dollars "when we already don't have enough money to spend in the first place."

The main budget bill also would allow the Michigan State Capitol Commission to borrow $40 million to build a welcome/educational center for visitors, at a time other major infrastructure upgrades are being done.

— voted overwhelmingly to let municipalities restrict the use of fireworks on more days. Current law authorizes local governments regulate more powerful fireworks, but it restricts their ability to do so on 30 days a year near or on all national holidays. The legislation would cut to 12 the number of days when local rules could not be in effect — largely around New Year's, Memorial Day, Independence Day and Labor Day.

— narrowly approved a bill that would let Michigan businesses count out-of-state workers for the purposes of qualifying for state economic development incentives. Republicans said the change would help more businesses expand or locate in Michigan, particularly in counties where people cross the border to work. Democrats said taxpayer support should not go to companies that employ out-of-state workers.

— passed a school safety plan . Schools would have to develop an emergency operations plan by 2020. A liaison in each district would work with a newly created state Office of School Safety, and there would be enhanced law enforcement training related to school violence. Districts would be required to consult with local law enforcement on security features before building a school or doing a major renovation. OK2SAY, Michigan's confidential tip line for students, would become permanent.

"One day at a time, one building at a time — as a team we must continually work to make our schools safer in every Michigan community," said a sponsor, Republican Rep. Jason Wentworth of Clare. "This plan provides a framework to do just that."

— backed legislation that would ease regulations in the charitable gambling industry after a backlash against the Snyder administration's crackdown on "millionaire parties," casino-style events where service groups, churches, schools and others split cash proceeds with poker rooms that run their fundraising events.