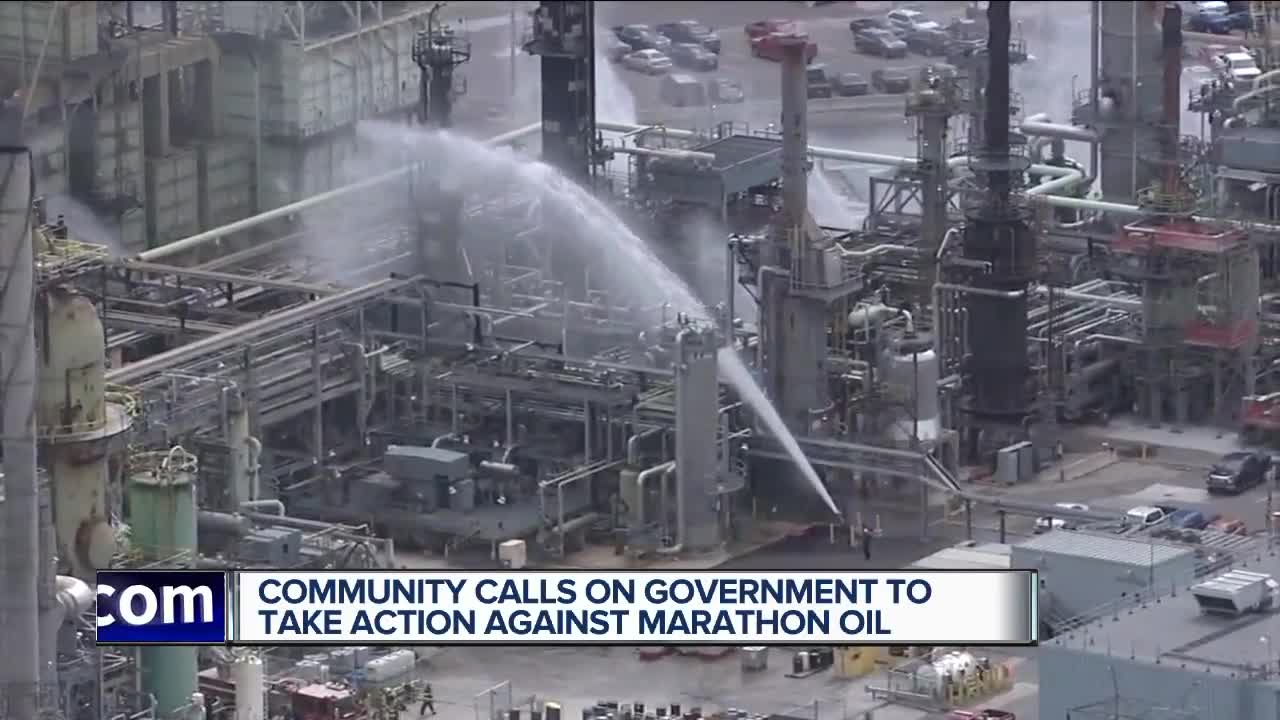 "Like a child marathon has not been disciplined for the bad behavior that they have exposed in the communities deluged with pollution."

"Like a child, Marathon has not been disciplined for the bad behavior," said Michelle Martinez of the Michigan Environmental Justice Coalition.

A spokesperson for Marathon said the air quality was not impacted.

"We need Marathon and our elected officials to be quicker in responding to these emergencies," said Vincent Martin who lives near the refinery. "I started receiving calls from my neighbors way before I ever received a single call from Marathon or officials.

Residents said they feared exposure to toxic fumes because they did not receive a robocall for more than hour after the leak that Marathon said took place at 1:20 pm.

Coming up Monday, September 16 at 2 PM, U.S. Congresswoman Rashida Tlaib wil be holding a field hearing on air and water quality at the Kemeny Recreation Center, located at 2260 S. Fort Street in Detroit.

Click on the video to hear from some of those in attendance at Friday's rally outside Cadillac Place in Detroit's New Center area.

The following statement on the Detroit refinery incident was released by Marathon Petroleum Friday afternoon:

As an integral part of Southwest Detroit for 60 years, Marathon Petroleum welcomes ongoing discussions about the air quality in our community. We regret the unintentional release of vapor that occurred yesterday and apologize for any inconveniences this may have caused in the local community. Air quality monitoring immediately after the release confirms no breach of safe emission levels.

Marathon holds the safety and health of our employees, contractors and neighbors as our highest priority. When the incident occurred, Marathon immediately deployed mobile air monitoring resources in addition to permanent fixed monitors located around our site and in the community. Those devices showed there were no breaches of air quality safety levels in the community. We continued to utilize our mobile monitors for several hours after the event received an all-clear, to further ensure that no impacts to air quality had occurred.

Throughout the incident Marathon refinery personnel worked with nearly a dozen local, state and federal officials at multiple government agencies.

We have undertaken a thorough investigation of this incident, with local resources supported by corporate experts, to understand and address any necessary operational and safety changes. Our record for improving the air quality of this neighborhood is unequaled, having invested more than $350 million since 2014 alone in enhancements to our Detroit Refinery. By doing so, we have reduced emissions from the refinery by 80 percent over the past decade. These investments have improved the air quality in southwest Detroit for all.

Marathon Petroleum welcomes open and transparent engagement with our neighbors and all Southwest Detroit stakeholders. We are ready to listen and answer any questions about this incident and our extensive safety protocols.