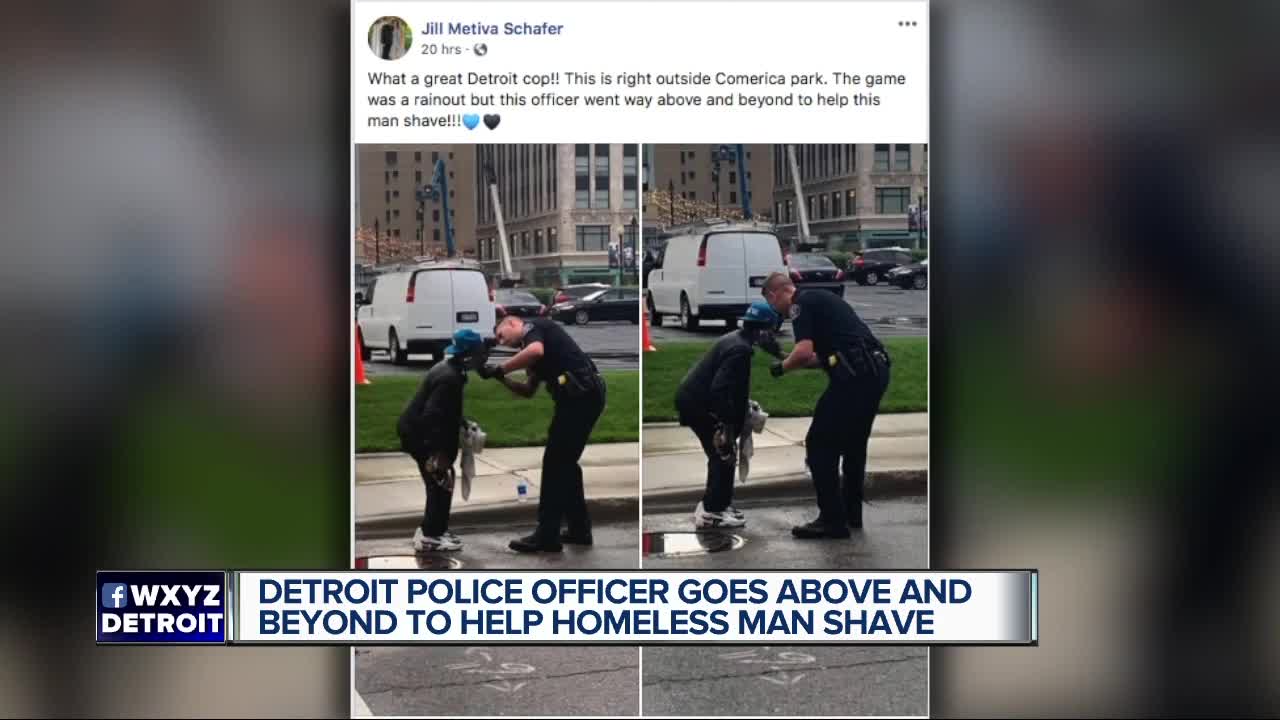 When Jill Metiva Schafer was leaving Comerica Park Wednesday, she saw a police officer helping a man on the side of the road.

DETROIT (WXYZ) — When Jill Metiva Schafer was leaving Comerica Park Wednesday, she saw a police officer helping a man on the side of the road.

"What a great Detroit cop!! This is right outside Comerica park. The game was a rainout but this officer went way above and beyond to help this man shave!!!💙🖤" she posted to her Facebook page with two heartwarming pictures of the encounter.

On Thursday, 7 Action News caught up with the officer in the pictures and asked him about becoming a police officer. He joined DPD three years ago.

"Just the need to help people," said Officer Jeremy Thomas who is assigned to Downtown Services for the police department. "I was a volunteer firefighter before this, and it's just been something I like to do, help people."

Officer Thomas said he saw a woman and her daughter had just given the man a homeless handout that included a razor, shaving cream, and a bottle of water.

A short time later, a worker for Comerica Park told the officer that the man was trying to use rain water from a downspout to shave.

Officer Thomas went over to the man who was then using a puddle to rinse off the disposable razor.

"He had shaving cream on his hands, his coat, his face, his eyes." Officer Thomas walked up to the man and said, "Excuse me, sir," and the man quickly replied, "I'll leave. I'll leave."

Officer Thomas told the man he didn't have to leave and that he just wanted to give him a hand shaving.

"That was beautiful what he did and God is gonna bless him for doing that for me because he didn't have to do that," said Stanley Nelson, the man Officer Thomas is seen in the photos helping.

"What he did for me, that was alright," Nelson told 7 Action News as he sat near a statue, a couple blocks away from the ballpark. "I really appreciate that because, you know, I'm going through my thing and I feel bad about myself, you know, but I'm gonna be alright."

"Just know that this could be you at any day," said Officer Thomas. "Nobody is better than the other person. They may be in a better position in life, but use that opportunity to take care of somebody else when you can."

Officer Jeremy Thomas has an identical twin, Justin Thomas, who is also a police officer for the City of Detroit.