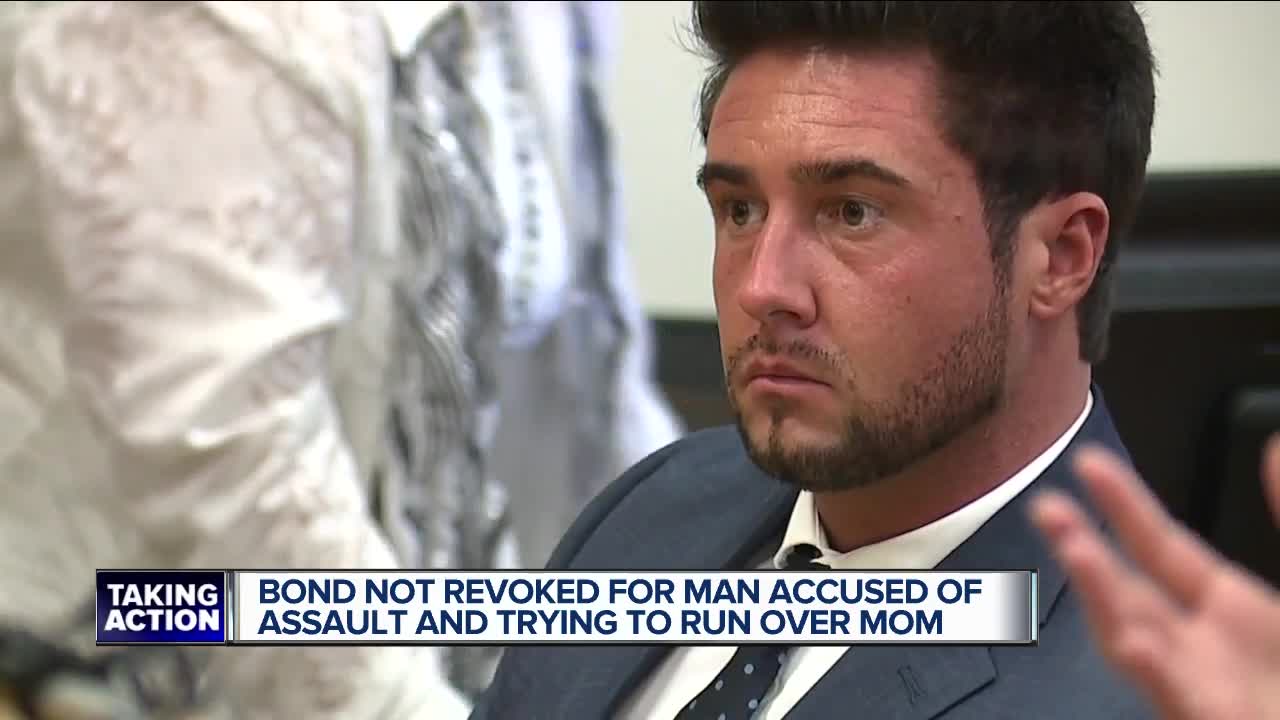 DETROIT (WXYZ) — No one has been able to control the activity of Marcus Nichols while he's out on bond or when he's been out on probation, according to Livingston County Assistant Prosecutor Kimberly Morrison who tried to convince Judge Michael Hatty to revoke bond for the 33-year-old.

Nichols has already been bound over for trial on charges that include third-degree Criminal sexual conduct (Force/Coercion). While out on bond in that case, Nichols allegedly tried to run over the victim's mother and another woman with his car which resulted in new charges of Felonious Assault.

Morrison has called Nichols a danger to the public.

Defense attorney Jinan Hamood said the teen's mother is the one who instigated the incident involving the car. Hamood said her client swerved because the woman threw something at his vehicle.

RELATED: Sex assault suspect now accused of trying to run down mother of teenage victim with his vehicle

But Morrison pointed out a trail of trouble that she said has followed Nichols, including two convictions for Operating While Impaired by Liquor and a 2016 embezzlement case that was pleaded down to False Pretenses.

"He has a history of violating bond and probation," Morrison said.

People close to the sexual assault case told 7 Action News that Nichols began enticing the teen when she was 16-years-old, and by the time she was 17, they were engaging in sex.

According to court documents, the teen said she was scared to say no to sex with Nichols, and that Nichols would push her into walls, doors and cabinets.

Nichols is, reportedly, a heavy drinker who introduced the teen to steroids.

At the end of Thursday's hearing, Judge Hatty did not remand Nichols to the Livingston County Jail, but he said Nichols is not allowed within one mile of the alleged victims in both cases.

The family of Nichols released this statement:

To say that today's decision by Judge Hatty is a disappointment is an understatement. The prosecution's work & case proving the habitual history of this criminal & what he has done (and can do) was compelling for bond revocation. The bench, in the face of all the law enforcement officials & their recommendations, chose to ignore the community.

Why? The treatment & lack of respect shown by the judge towards the prosecution team is something I would have never expected from such a high level public official. This leaves one to wonder (witnessed by an entire court room)? The freedom being afforded to a habitual criminal & lack of consideration for the safety of not only the family but the entire community is something that the citizens should not stand for.

Other Judges in the last 12 months served Nichols over 5 months jail time! Why does Hatty look at this in such a light way? Evidence against the defendant in past charges & convictions is undeniable. The leniency shown today by the bench is deplorable. He asked for the community to tamper down the emotions & leave for the system to handle? How can that be when criminals with money behind them are allowed to roam free & continue to terrorize victims & their families? I certainly hope that no harm comes to anyone associated with this past convicted criminal while he is waiting for the next trial of countless charges while being granted freedom by Judge Hatty.