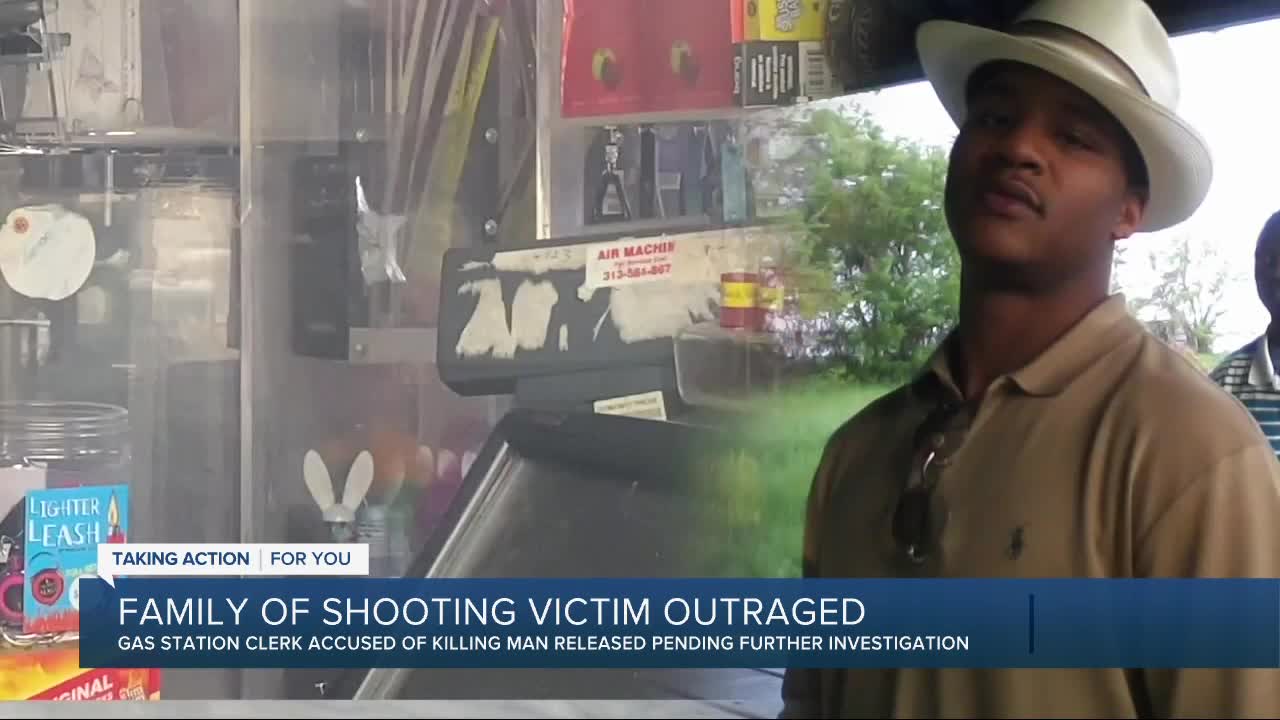 The family of a man killed at a gas station is outraged the suspect has been released pending further investigation.

DETROIT (WXYZ) — "He gotta pay for my son. He gotta pay," said William Lewis Jr. about the 18-year-old gas station clerk who fatally shot his son Monday night. That clerk was released from jail Thursday after Wayne County Prosecutor Kym Worthy refused to sign the warrant request and criticized the information presented by Detroit Police.

"She should have never let him go," said the victim's father as he and other relatives stood outside their home on Detroit's east side, preparing to go to the cemetery to make funeral arrangements for his son.

The family of Joshua Lewis fears the clerk who fatally shot him with an AK-47 will get away with a case they believe should be charged as first-degree murder.

"That man was protected behind that glass so how could you feel threatened?" said Emily Rippy, mother of Joshua Lewis. "You killed my son because that's what you wanted to do."

Police said Joshua Lewis had used a screwdriver to steal from a coin machine inside the 76 gas station on Gratiot Avenue near Harper Monday night.

Some witnesses have reportedly told the family that Joshua was shaking the machine to retrieve money he believed it kept in error.

Police said the shooting is seen on surveillance video and shows the young clerk shooting the AK-47 through the safety glass.

The clerk was arrested and the day after the deadly shooting, Detroit Police Chief James Craig said it didn't appear the clerk's life was in imminent danger and that there was no justified reason to shoot Joshua over a property crime.

But the time to hold a suspect without formal charges was running out. And late Thursday afternoon, Worthy released a statement in which she criticized the information police presented for a decision on criminal charges against the clerk.

In a statement, Worthy listed items she said should have been included in the package of information from police investigators, including police reports for all uniformed officers and a plainclothes officer who responded to the crime scene, a police report from the officer who retrieved the video from the store, the EMS run sheet, and the report from the medical examiner's office.

Chief Craig fired back and, in a statement, wrote: “I find it interesting that I did not get one call from the Prosecutor’s office on any concerns relative to the investigative work of this case. My review and understanding based on what was clearly depicted in the video is that there were no imminent threat of life to the suspect. He, in fact, fired a single round through the safety glass barrier, striking the victim who was in the process of committing a property crime.

The gas station clerk who killed Joshua Lewis is the brother of the owner.

"This guy is a flight risk," said Joshua's father. "If he gets out of the United States, we'll never ever, ever, ever get justice for my son."

City officials told 7 Action News that the gas station should not have been in operation because their certificate of compliance expired in January 2020. We're told the owner had been working with the city's building department to get their business license, but he never completed the process.

It's unclear when a decision on charges will be made.

Below is what Wayne County Prosecutor Kym Worthy detailed in a press release Thursday. It's followed by a statement issued by Detroit Police Chief James Craig on Friday.

On October 12, 2020 at 10;45 p.m. it is alleged that an 18-year-old male clerk fatally shot Joshua Lewis, 30, inside a gas station convenience store located in the 10070 block of Gratiot in the City of Detroit. The Detroit Police Department submitted a warrant request to the Wayne County Prosecutor’s Office on October 14, 2020 at approximately 12:30 p.m. The case has been assigned to the Prosecutor’s Violent Crime Reduction Initiative*, which has determined that several items are needed to complete their review:

As a result, the warrant has been returned to the Detroit Police Department for further investigation.

In the past week the Prosecutor’s Office has had to return two other VCRI homicide warrants that were missing basic reports that are required for the review of a homicide case. These items included: a suspect’s statement, video statements of witnesses, crime scene photos, body-worn camera video, an evidence technician’s report and sketch of a crime scene, tape of a 911 call, video surveillance footage, a facial recognition report, firearm reports, photos shown to a suspect, photo lineup documentation, and search warrants.

“The Gratiot gas station shooting occurred on Monday, October 12th. We did not receive the warrant request until Wednesday, October 14th, and it was missing documents necessary for a proper review and charging decision. We will not have the information that we need today. As a result, by law the suspect will be released today pending a charging decision in this case,” said Prosecutor Worthy. “Unfortunately, this is not the first time this has happened or even the 20th, but it seems to be occurring with much more frequency lately. Just yesterday, we had two other homicide cases that had to be returned to DPD because they were missing so many basic reports and evidence that it completely prevented us from going forward. This is very disturbing.

*On October 23, 2018, the Violent Crime Reduction Initiative (VCRI) was presented to the Wayne County Prosecutors Office (WCPO). One of VCRI’s goals is to make the warrant recommendation process for designated homicides as productive as possible. This initiative also includes the review of designated non-fatal shootings. Homicide and non-fatal shooting warrant requests are extremely time-consuming, frequently contain voluminous digital records, and generally require hours of legal work prior to the point where a charging decision can be made.

Warrants are often rejected due to a lack of admissible evidence or a failure to fully garner all the available evidence at the initial stage. An early legal review of the available evidence--when resources permit--along with the early collaboration between the WCPO and DPD, enhances the warrant review process and will be a savings in both time and effort.

“I find it interesting that I did not get one call from the Prosecutor’s office on any concerns relative to the investigative work of this case. My review and understanding based on what was clearly depicted in the video, is that there were no imminent threat of life to the suspect. He in fact, fired a single round through the safety glass barrier, striking the victim who was in the process of committing a property crime. The video supports this and the assigned prosecutor has seen the video and has also been in regular communication with the assigned detective. We recognize and appreciate that the prosecutor office is responsible for charging decision and if there are additional information that we have to provide, certainly we will do that. However, if Prosecutor Worthy knew about any concerns relative to this case or any other key cases she referenced, why didn’t she contact me directly? She never reached out.”