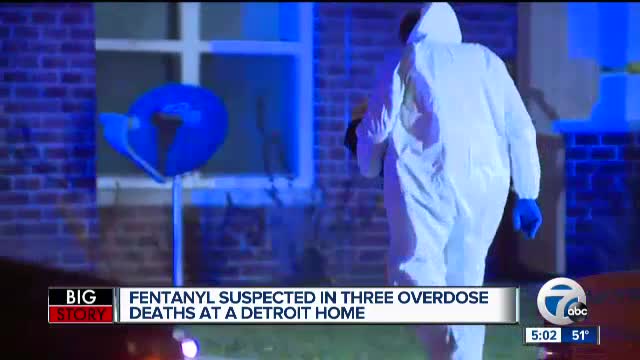 The Detroit Police Department is investigating three suspected overdose deaths after two young girls found them unresponsive in a home on Detroit's east side Sunday afternoon.

DETROIT (WXYZ) — "It don't seem real at all," said Rodney Nathaniel whose 31-year-old son, Rashawn Nathaniel, was among three people found dead inside a home on Caldwell near Emerald Springs on Detroit's east side.

The others found dead have been identified as Donna Wilson, 30, and Marcel Redmond, 31.

First responders were able to revive a fourth man with Narcan.

Sources tell 7 Action News that an off-white substance was being analyzed to see if it's cocaine or heroin, and if it could contain Fentanyl or carfentanil, a synthetic opioid that can look like heroin or cocaine.

RELATED: Drug users can now test if fentanyl is in the drugs they are using, before injection

Rodney Nathaniel believes his son smoked marijuana before, but says he never smoked in front of him. He's now wondering, if drugs were involved, was it laced with something deadly.

Donna's two daughters were taken to a hospital for observation. They are now staying with their father.