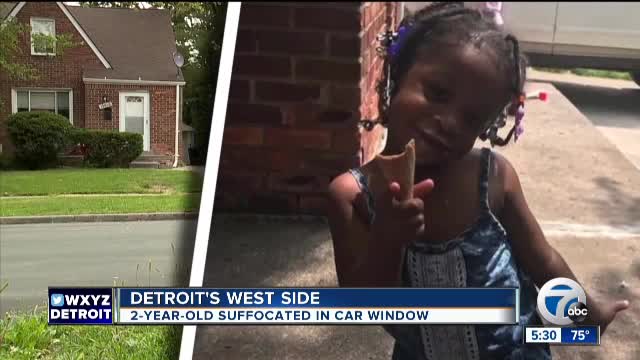 Relatives of Kierre Allen are devastated after the 2-year-old girl died tragically Monday afternoon with her dad just a few feet away from her.

DETROIT (WXYZ) — Relatives of Kierre Allen are devastated after the two-year-old girl died tragically Monday afternoon with her dad just a few feet away from her.

It happened in front of the family's home on Winthrop near Grand River Avenue on Detroit's west side.

Little Kierre was in a 2005 Mazda 3 with her dad. They were parked in the driveway, and relatives said her dad fell asleep and when he woke up, he found his daughter's lifeless body.

Relatives said it appears the power window was activated as Kierre was partially out of it when it closed. Detroit Police said the toddler's head was stuck in the car's window.

Relatives were alerted when the little girl's father began to cry out for help.

Kierre's uncle rushed her and her dad to Sinai Grace Hospital where she was pronounced dead.

Detroit Police are investigating and took Kierre's father into custody on unrelated warrants.