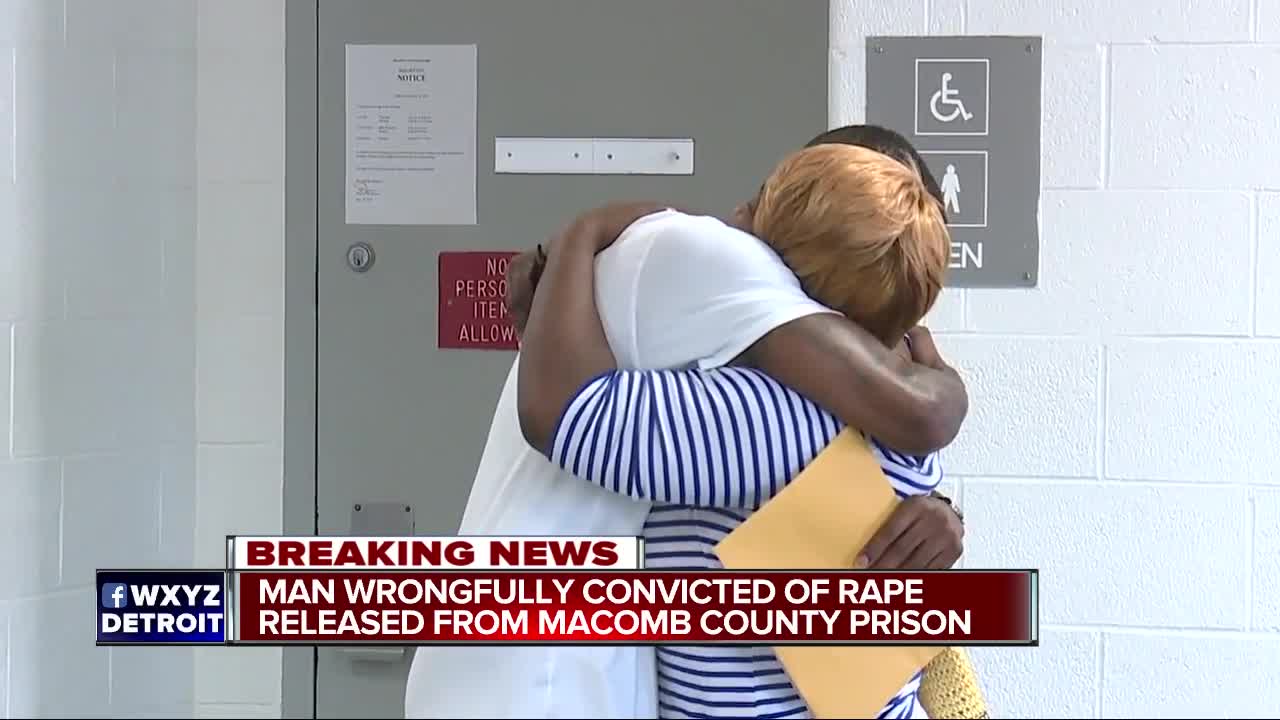 A man who was wrongfully convicted of rape has been released from a Macomb County prison.

DETROIT (WXYZ) — On Tuesday, James Chad-Lewis Clay, 38, and his mother said evidence that could have eliminated him as a suspect in the 1997 rape of a 15-year-old girl was never presented to the jury.

The girl was dragged into an alley in Detroit and raped at gunpoint, and her rape kit sat on a shelf for years without being processed.

Then in 2017, the Wayne County Prosecutor's Office charged Clay, who is known to many by only his middle name of Chad, with First Degree Criminal Sexual Conduct after it was determined so many years later that it was his DNA on the victim.

"He kept saying y'all got the wrong person," said Dennis Lyons, Chad's stepfather.

In 2017, twenty years after she was raped, the victim reportedly did not recognize any of the men in the police photo array. One of them was Chad, but as an adult, not the 16-year-old boy she was dating around the time of the attack.

And Chad said he didn't recognize the victim as an old girlfriend because the picture investigators showed him was a 35-year-old woman.

But as the case moved through the courts, Chad said he told his defense attorney before his trial in 2017 that he eventually did recognize the woman as someone he dated years ago. Chad said his attorney told him to write down and sign it, but he said his statement was not allowed to be entered into evidence.

And his old high school girlfriend would soon have memories come back to her, too.

The victim told police that when she saw the defendant's name on paper and it included the name Chad, she realized that she dated someone by that name around the time of her attack.

And four months before trial, the victim met with an investigator and, according to a police report signed by the victim, the investigator asked what she wanted to tell them. "I was intimate with a guy named Chad," she wrote as her answer. She added that she met him through a friend.

But it doesn't appear that either of their statements made it to the jury in 2017.

Chad's mother, Ethel Lyons, said investigators and prosecutors had the woman convinced that there were two different Chads - the one she dated and the one who raped her, and the one on trial was the one who attacked her.

In addition to Chad's DNA, a source told 7 Action News that there was a second sample of something but too little of it to be of any value.

Chad was found guilty and sentenced to 25 to 50 years in prison.

And, in 2019, Ethel hired Steve Crane, a private investigator, and he went to the victim and showed her a picture of Chad when he was 16 and that's when she knew that the man prosecuted for her rape was the Chad she knew when she was 15.

"While I was dating Chad, we had a sexual relationship," she wrote in a letter. "And this relationship occurred during the time period that I was rape(d). Knowing this now I know that James Clay (Chad) who is in prison for my rape is innocent."

Crane contacted Detroit Free Press reporter Elisha Anderson and Anderson then began her own month-long investigation into the details surrounding the case.

A few weeks ago, Anderson contacted the prosecutor's office with her findings, prompting them to open an investigation into the case.

A spokesperson for the Wayne County Prosecutor's Office said "in the interest of justice" they began the steps it would take to get Chad released from prison on what is essentially a personal bond as they continue their investigation.

"It was a nightmare," said Chad who missed the high school graduations of some of his children and the birth of his first grandchild.

Click on the video to hear from Chad and see his release from prison Tuesday.