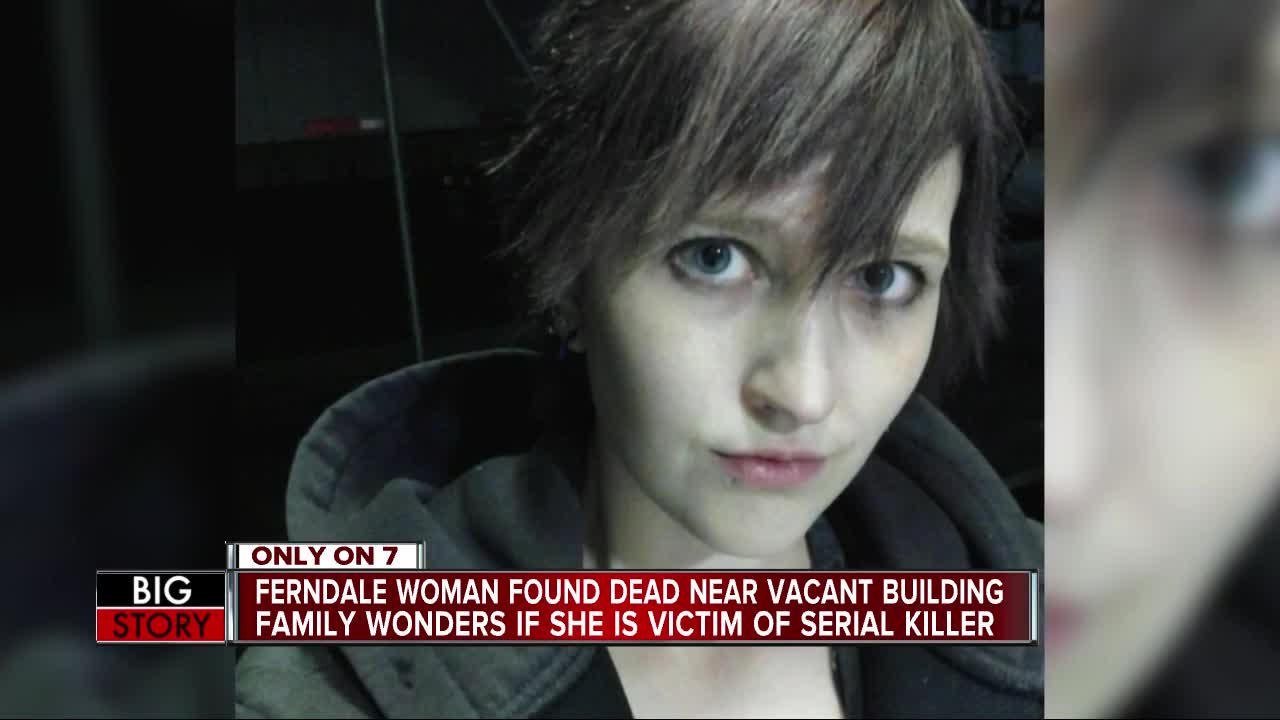 The family of a Ferndale woman who was found dead near a vacant building is wondering if she was a victim of Detroit's suspected serial killer.

DETROIT (WXYZ) — Three days after the body of 52-year-old Nancy Harrison was found in a vacant house on Coventry near Remmington, the body of Stephanie Davey, 28, was found less than a half mile away behind a vacant building on the 600 block of East State Fair.

Detroit Police believe Nancy was killed by suspected serial killer Deangelo Martin, and now Stephanie's loved ones can only wonder if her death may also be tied to Martin.

Detroit Police said, at first, because of decomposition, they believed Nancy died of an overdose, but it was later determined that she died from blunt force trauma to her head.

Stephanie's cause of death is still pending. And, like Nancy, Stephanie had a drug problem, according to her stepfather, Dale Nelson.

"To be just left in a driveway here just breaks our hearts," Dale told 7 Action News when he went to see where his stepdaughter's body was found Monday.

Stephanie's body was decomposed when she was found on March 22. She wasn't identified until some of her friends, searching a database of Jane Does, knew she'd been found dead when they saw her tattoo of one of her son's names listed for a Jane Doe.

Stephanie grew up in Algonac, but she was living in Ferndale at the time she went missing.

On Monday, Ferndale Police said they've had contacts with Deangelo Martin. And one of those contacts also involved a woman, Deborah Reynolds, 64, who is now missing and feared dead by her family.

On August 3, 2018, Ferndale Police went to a 7-11 on a report of "suspicious or disorderly people," they said in a press release.

Deborah's relatives have said that she didn't know Deangelo Martin, but Ferndale Police said, "Martin and Reynolds were familiar and friendly with each other, even seen standing arm in arm on video. Reynolds did not appear coerced or fearful."

Ferndale Police then dropped the two off near Woodward Avenue and State Fair. Deborah has, reportedly, not been seen alive after police dropped her off in Detroit with Deangelo Martin.

On September 2, 2018, Ferndale Police had another contact with Martin when they stopped him for jaywalking on Woodward Avenue near Cambourne where they said he was "walking into the line of moving traffic and causing cars to swerve and brake." He was later arrested for giving police false information about his identity.

On Monday, Deangelo Martin was charged with four counts of First Degree Criminal Sexual Assault (Rape) and Assault with Intent to Murder.

He's being held without bond.

As of right now, Detroit Police have only said they believe Martin is tied to the murders of three women and attacks on two other women who fought back and survived.