Following the paper trail linked to the I-696 toxic ooze 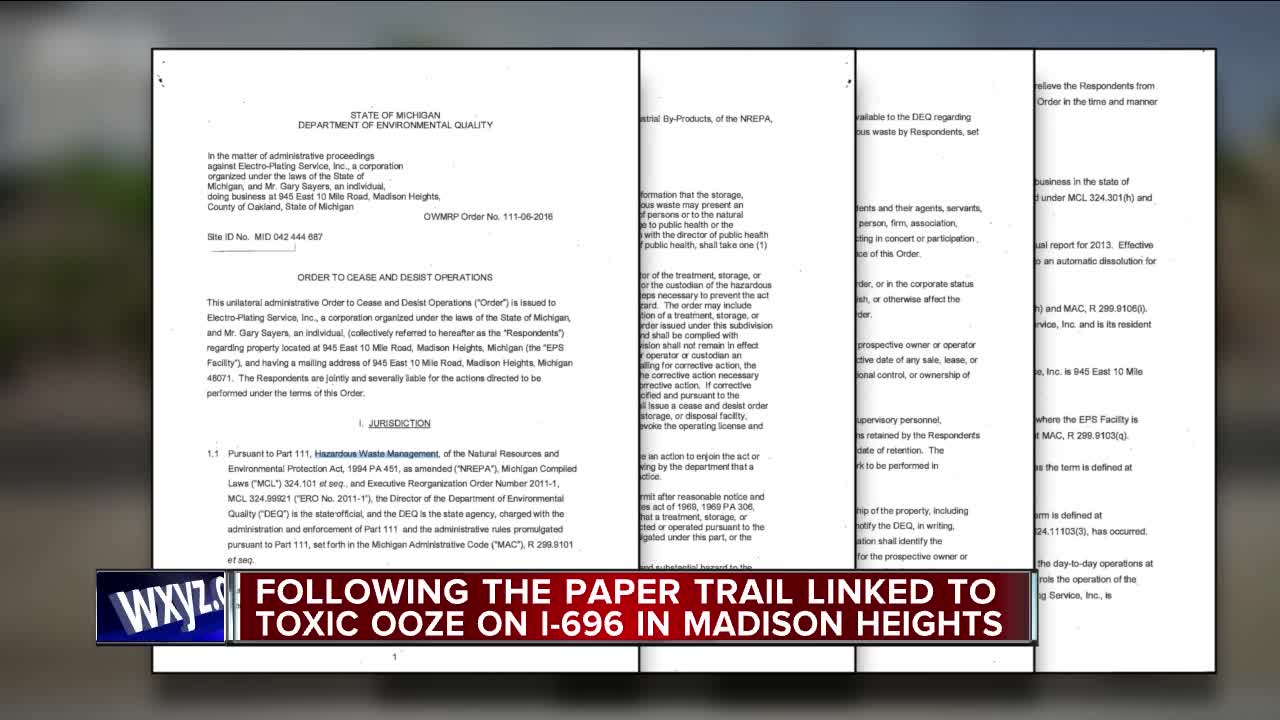 We have new information about the pit in the basement of Electro Plating Services in Madison Heights, the source of the toxic ooze on I-696.

MADISON HEIGHTS, Mich. (WXYZ) — We have new information about the pit in the basement of Electro Plating Services in Madison Heights, the source of the toxic ooze on I-696.

The truth about the neon liquid oozing onto I-696 shocked much of metro Detroit, but not Douglas Cochran.

“I noticed it last winter, sometime, probably November/December, same color as anti-freeze or Mountain Dew. But if it’s frozen, it couldn’t be anti-freeze in there, so that was a little but concerning,” he says.

Google Maps Street View saw the ooze before he did in August of 2018.

Cochran travels I-696 every day and assumed thousands saw.

“Yeah, the way it was coming right out of the ground, it was obvious,” he says.

Google Street View first captured it in 2016, but documents filed with the EPA reveal that Michigan’s Environmental inspectors knew about the hazardous waste problem 20 years earlier in 1996.

That’s when Gary Sayers was issued his first violation from the MDEQ for improper storage of hazardous waste, among other environmental violations.

One inspector described a basement pit that Sayers excavated in 1993 specifically to hold hazardous waste, estimating it to be 20 feet wide and 50 feet long.

My administration is actively reviewing all means of accountability, including further criminal charges against the polluter who caused this mess. I also directed EGLE Formerlyto conduct a formal review of its pollution inspection procedures to strengthen enforcement and accountability.

EGLE was just formed in April of this year, it used to be the MDEQ.

EGLE staff tell me they inherited a mess and they welcome the review and the reform in Madison Heights.

7 Action News has learned Attorney Jeffrey Sherman filed a lawsuit against Sayers on behalf of the city of Madison Heights. There is a trial tentatively scheduled for Jan. 13, with the trial having been adjourned from Nov. 25, 2019.