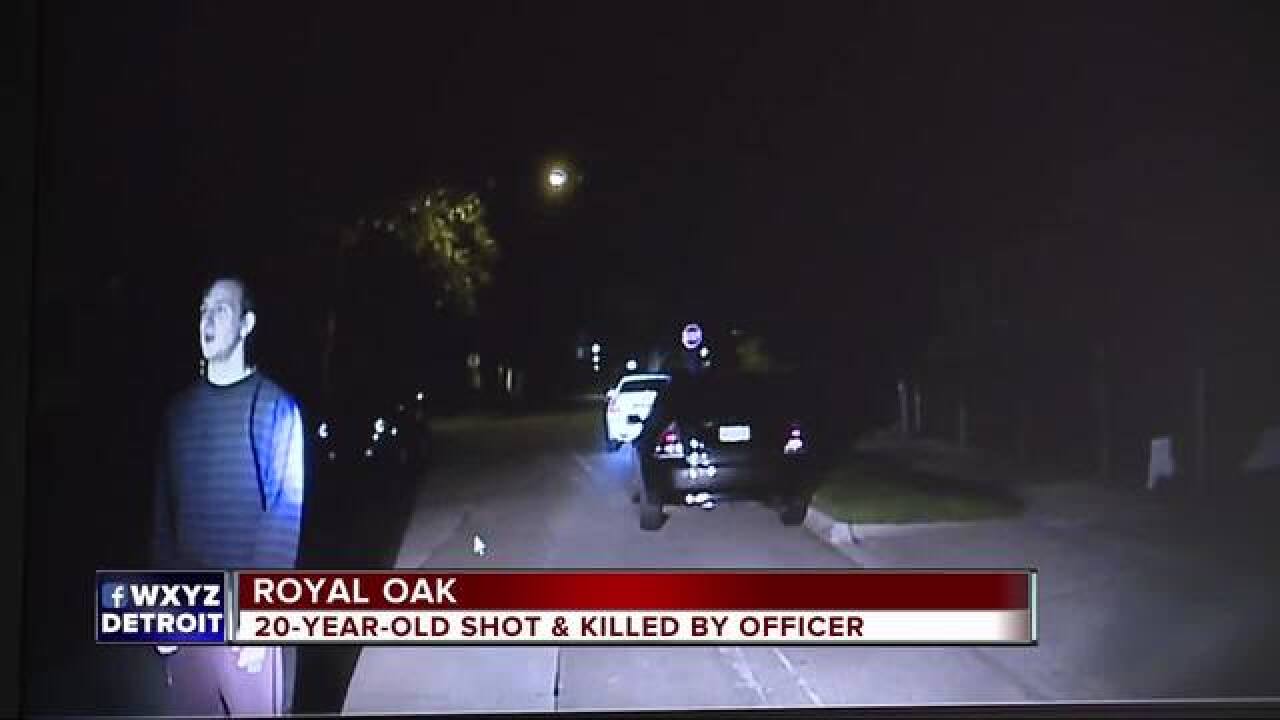 The Oakland County Prosecutor's office has cleared a Royal Oak police officer in the fatal shooting of a 20-year-old.

The incident happened just after 3 a.m. on May 14. Officials say Cody Reynolds parents called 911 to report that he had stabbed his mother and injured his father in altercations inside their home.

Officer Ryan Addis responded to the scene and found Reynolds nearby on the street near two cars.

Addis approached Reynolds and saw that he matched the description of the suspect. Because he was wearing a long sleeve shirt that was not tucked into his pants, Addis could not tell if Reynolds was still carrying the knife.

According to the report, police recordings show Reynolds approaching Addis and ignoring his order to stop. After taking a couple more steps, Reynolds obeys and responds "Yes" when asked if he was the one that had stabbed somebody.

Addis told investigators he stepped out and away from the patrol car, to put more distance between himself and Reynolds.

He then ordered Reynolds onto the ground, which Reynolds did by dropping to his knees with his arms in front of him.

It is then that the in-car recording system captures Addis asking Reynolds if he still has the knife. Reynolds does not answer and then springs and lunches at Addis while saying - according to Addis - "

Addis then opens fire, hitting Reynolds four times, and hold his gun on him until back-up arrives on the scene.

Reynolds was given first aid and then transported to Beaumont Hospital, where he was pronounced dead. The investigation determined that the sequences of events support the contention that Addis was in fear of his life because he did not know if Reynolds was armed and, because of this, he was justified in opening fire.

An autopsy determined that Reynolds had been shot once in the front and three times in the back. It was determined that the first shot hit Reynolds in the chest, traveled through the left lung and lodged in his left back. The path of the bullet was consistent with Reynolds springing up and lunging at Addis.

Blood samples were taken during the autopsy and testing revealed the presence of psilocin, the active hallucinogenic component in a compound found in dozens of mushroom species.

A forensic toxicologist later determined that the psilocin concentration in Reynolds' blood was 2.5 times the reporting limit.

Investigators spoke with a witness who told them that Reynolds was with two other friends the night of the incident and consumed two grams of psilocybin mushrooms at some point, and then wanted to go home to experience the effects.

According to the report, Reynolds, who has a history of depression and suicide attempts, was on probation in connection with a February 25, 2017, wrong way crash on Woodward that seriously injured another driver. Investigators found that Reynolds was highly intoxicated with a blood alcohol level of .247. Marijuana and a marijuana grinder were also found in the car.

Reynolds was convicted of OWI Causing Serious Injury and sentenced to two years' probation and six months in jail. Upon his release, he was sentenced to wear an alcohol tether and to not use drugs or alcohol.

While a conventional drug screen would test for alcohol or marijuana, it would not detect psilocin.

During their investigation, officers searched Reynolds room and found a cryptic note with "1/3 I understand" written on it, followed by the word "love" crossed out. At the bottom of the note was written: "I hate my life."