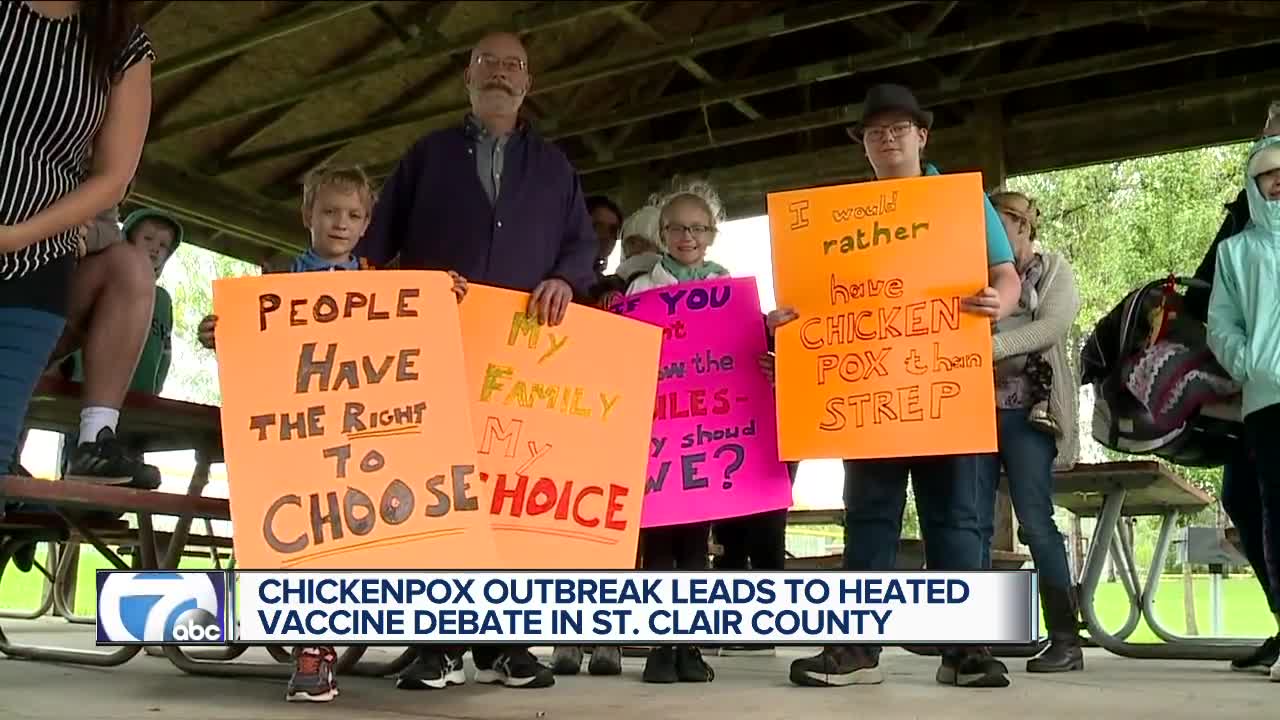 There's a heated debated in Marysville over vaccinations in the wake of a chickenpox outbreak.

MARYSVILLE, Mich. (WXYZ) — A group of Marysville parents is outraged, after the school district announced last week that students without the Chicken Pox (Varicella-Zoster) vaccine should remain home from school amid an outbreak.

The announcement came from the district's superintendent, Dr. Shawn Wightman, after advisement from the St. Clair County Health Department.

So far, two cases of the highly contagious disease have been reported. Chicken Pox can cause a itchy blister-like rash.

“It’s my right. I’m protected under state law to have the choice," said Stacy DeShon, another Marysville parent said regarding vaccines.

According to the St. Clair County Health Department, unvaccinated students are highly susceptible to contracting and spreading the disease.

DeShon feels the district has a double standard.

Some parents feel the district has a double standard when it comes to vaccinations. Stacy DeShon is a Marysville HS parent @wxyzdetroit pic.twitter.com/2G39ybsLs9

“They’re still allowing the sports teams to play. They’re allowing students from homecoming from other schools to come into the dance, they’re not checking vaccine status. Band had a competition, they let them go compete against other schools," she told 7 Action News.

According to some parents, Marysville district officials didn’t immediately tell them why their kids were asked to leave school.

“We feel ostracized I guess you could say," said sophomore Faith Thomas, one of the 37 student originally affected by the district's choice.

“They paraded me and everyone else around in front of our lunch room," said said.

In a statement, Dr. Shawn Wightman said in part "....all exposed susceptible students were discreetly brought down to the school’s office and respectfully informed of the situation. A letter, drafted by the St. Clair County Health Department, was also provided.”

He also stated school staff then called parents to notify them of the situation.

As of Wednesday, 14 students have still not been vaccinated or provided proper documented of immunity, according to Dr. Wightman.

As long as no new cases arise, all students will be welcomed back to school Monday, Oct. 7.

Of the high school's nearly 900 students, Dr. Wightman said 98 percent are either vaccinated, or have shown proper documentation of immunity.

The district said it has provided tutoring to the students who are at home. All absences are marked as excused medical absences.

For more information about the Chicken Pox and vaccines, click here: https://www.cdc.gov/chickenpox/about/index.html