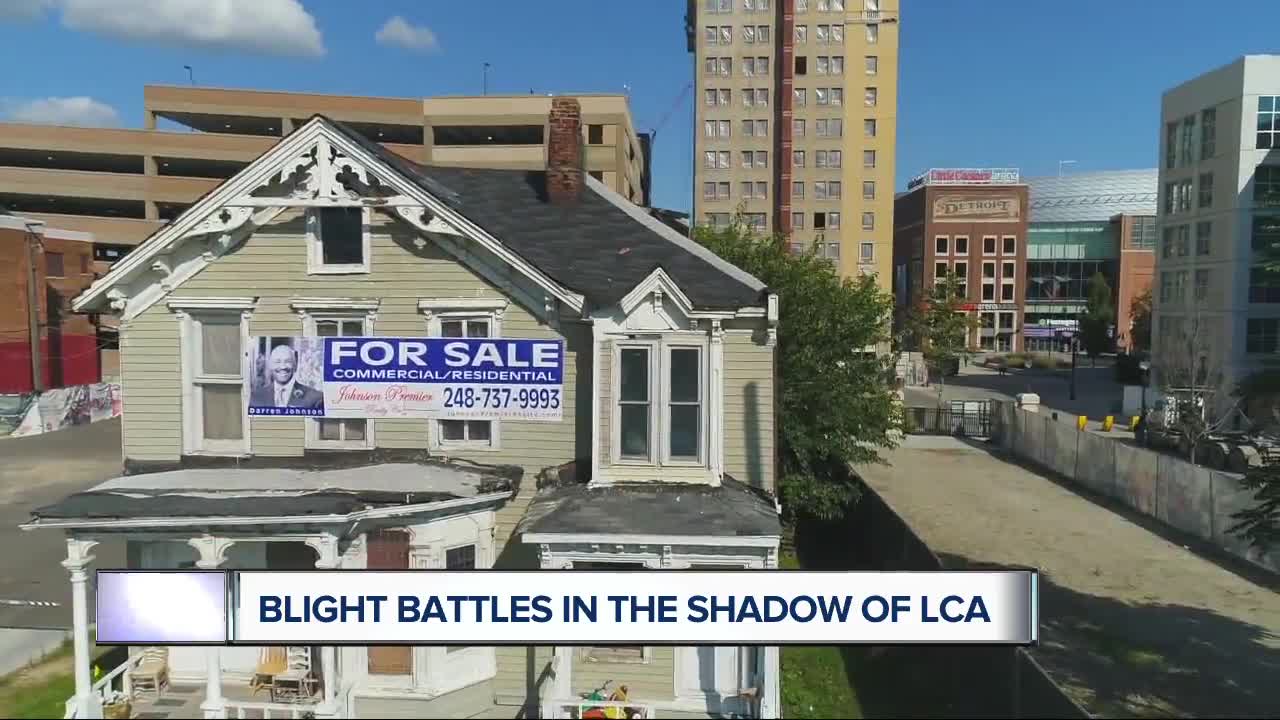 The future of 2712 Cass Ave — a ramshackle house next to Little Caesars Arena — will remain in limbo until February 2020 after a Wayne County judge pushed back, for a second time, a review of mandated rehab work. 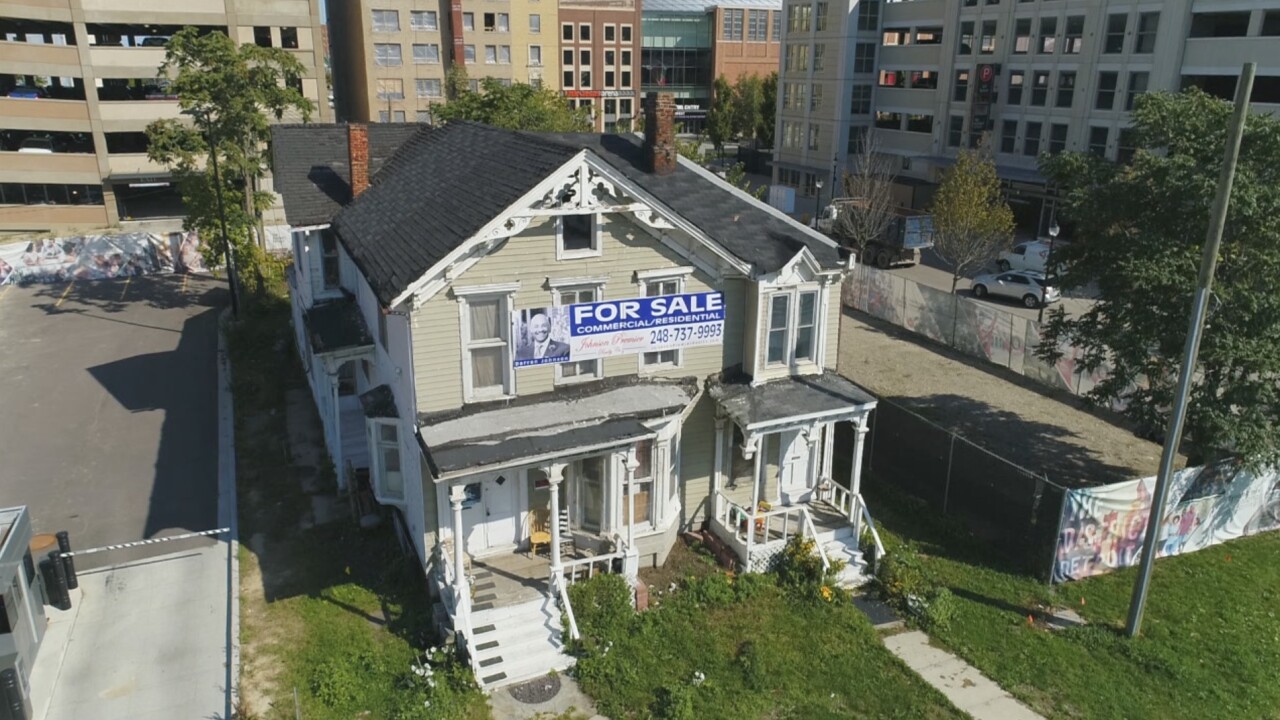 The future of 2712 Cass Ave — a ramshackle house next to Little Caesars Arena — will remain in limbo until February 2020 after a Wayne County judge pushed back, for a second time, a review of mandated rehab work.

“There’s been a little progress made,” said Lawrence Garcia an attorney for the city of Detroit. “Enough that the city and the judge would like to give the homeowner more time.”

The house, which is one of the last standing in the lower Cass Corridor and currently on the market for nearly $5 million, has been battling over blight since July 2018. Following a May complaint by the City of Detroit, Wayne County Circuit Chief Judge Robert Colombo ordered that the owners either bring it up to code or demolish it by August 31, 2018.

If you've been around Little Caesars Arena, you've likely seen this house. It's a two-story, rundown home with an asking price of nearly $5 million. Tonight on @wxyzdetroit at 6, I'll have more about the home & the fight with Detroit over blight. @Allie_Elisabeth pic.twitter.com/Orszr39bP5

The owners decided to go the repair route, pulling a $230 rehab permit that would give them until February 2019 to make the fixes. In January, however, following an early inspection by the Buildings, Safety Engineering and Environmental Department, an extension was given by Judge Timothy Kenny who took on the case after Colombo’s retirement. The work was then set to be finished by August 2019, but Kenny gave another extension in July. The permit will now expire in January and Kenny will review the case in February 2020.

"We don’t want to rush to condemnation it’s a pretty harsh remedy," Garcia said, giving context to the two extensions. "It’s a pretty hard outcome for the owner of the property."

While he acknowledged that the owner could sell the property before the rehab work has been completed — something that would save the owner money as a rehab permit is only $230, while a demo would likely cost several thousand — the City is trying to give the owner the benefit of the doubt.

"We have seen some efforts and some progress made," Garcia continued. "So that’s enough to keep us from trying to go to that [condemnation] step."

Raymond Scott, Deputy Director of BSEED, however has indicated that there is a desire for a more speedy process — as the house has now been in something of a suspended-state for over a year now.

“What we’re seeking to do within the next 30 days is to go back in front of the judge and ask for a compliance hearing for the lack of progress and for the ability of the city to enforce on the lack of progress,” Scott told Channel 7 in an interview earlier this month.

Since 2009 2712 Cass Ave. has received 64 blight tickets, racking up a bill of $65,555. BSEED, however, explained that the decision to move the property’s future to a courtroom had nothing to do with the tickets and rather the fact that the owners failed to respond to a March 2018 emergency order seeking access to the inside of the property to inspect fire damage.

In fact, once the case went before a judge, the city also dropped attempts to garnish the ticket fees owed.

“The city’s annual budget is around $2 billion and revenue is produced by all kinds of city activities, but wringing thousands of dollars out of individual property owners is not a major revenue driver for the city of Detroit, so that’s not really the objective,” Garcia told Channel 7 last month. “It’s not to make money. It’s to try and hold people to account for the condition of their property when it’s in an unacceptable condition.”

While the owner of the property, Scheherazade Love, declined to speak on camera she indicated displeasure with the entire process and disagreed with the options she was given.

In September Love filed a request with the State Court Administrative Office to investigate what she wrote was a case that "NEVER should have been filed."

A month earlier she presented a miscellaneous pleading in the case writing that "the facts of this case from the Law Department show overwhelming discrimination, harassing with lack of evidence of this family RESIDENTIAL HOME being a nuisance, and a danger to society." She later added that the "case started" because city inspectors trespassed into her backyard.

"Nothing was visible from the street," she continued.

Love purchased the building 2002 for $25,000 placing the title in the name of a family trust — CM&S Family Limited Partners — with her children listed as the general partners in the group's 2002 filing with the State of Michigan.

In May 2018 following the city's complaint, Love recorded a quit claim deed with Wayne County showing sole ownership of the house. The filed deed had been signed in 2012.

Garcia said the city was originally meeting with her son to resolve the nuisance issues, but has subsequently been dealing with Love who first listed the property in 2015 for $3.5 million. The house was taken off the market in May 2016 after failing to sell for $5 million. In March 2017 it was re-listed at nearly $5 million with the price increase reflecting the fact that the Pistons announced in November 2016 that they would leave the Palace of Auburn Hills to join the Red Wings at the new Little Caesars Arena. The price has wobbled in the two years since, hitting $4.79 million in 2018 and $4.82 million this spring.

The current Zillow ad notes that the price is not based on the house but rather "land and location value."

"INCREDIBLE BUSINESS OPPORTUNITY TO OWN THE LAND RIGHT NEXT TO THE NEW LITTLE CAESARS ARENA!" it reads.

While the advertisement touts its proximity to Olympia Development-based parking lots and projects like Little Caesars Arena, this closeness has also been a point of contention — especially in light of the current court order. While the 2712 Cass Ave. received dozens of blight tickets since 2009, several nearby Ilitch-owned buildings did not receive the same scrutiny or penalties.

Just down the street from the Cass House, for example, are the former Hotel Ansonia and former Atlanta Apartments. These two Ilitch owned buildings received zero blight tickets since 2009 when they were purchased by the Ilitch family’s Sorin Enterprise. This comes in spite of the fact that up until 2018 — when media began reporting on uneven ticketing — they lacked windows and weren’t securely closed. Those are violations of city code that are supposed to lead to fines.

“The fact that a house like this in this condition is now going through a court process to address blight violations, while buildings all around it could have had the same tools or adjudication and it’s not happening is cognitive dissonance at its finest or saddest,” said Francis Grunow, the former chair of the recently disbanded District Detroit Neighborhood Advisory Council — a citizen-based entity that was tasked with working with Olympia Development to make sure projects around the publicly-funded arena took into account the needs and concerns of those who live in the area.

“The Ilitch on the ground game plan especially with existing structures that are vacant or any structure really has been disinvest. Often those buildings go vacant, they go blighted and they get demolished. That’s kind of the trajectory of many Ilitch properties,” Grunow continued, referencing a 2017 statement Chris Ilitch made to the Detroit News, where he explained the company’s strategic development plan for the arena, which involved sitting on nearly 70 properties — letting many decay and rot — while waiting for the right moment to proceed with the arena project.

"It took us 15 years to accumulate the property so we can achieve this transformative project,” Chris Ilitch told the Detroit News last fall. "It's been painful to not be able to develop some of that property because every time we made a move, the price for other property would shoot way up. But we had to wait, and that hurt."

The Ilitches did not respond questions around accusations of “blight by design” but instead sent along this statement.

“This city has come a long way. The transformation is unprecedented. Our strategy is rooted in one fundamental principle: The people of Detroit deserve real estate development that expands opportunity and makes the city more dynamic and accessible for all people,” Ed Saenz, director of communications for Olympia Development, wrote in an email. “For over 30 years, we have a proven track record of steady and balanced development in Detroit. In the past 5 years alone, more than 20,000 construction and construction-related jobs and 3,900 permanent jobs for Detroiters and Michiganders have been created. And we're just getting started. We remain resolute in our commitment to create local jobs, expand affordable housing, preserve treasured landmarks, and make our vibrant neighborhoods more welcoming and safe. Working in collaboration with city leaders, we have no doubt that great things lie ahead for this great city."

The city, for its part, says it's not picking on this house.

“There are a lot of properties in the city of Detroit that are in a lot of different states of repair or disrepair, and so it’s a very hard job to figure out which ones to pay attention to and in what order you pay attention to them,” said Garcia, adding that in a weird turn of events the property was a point of interest for the media before it was a point of interest for the city.

"In any event it’s a property that needs some attention and that’s what it’s received. And we’re trying to pay attention to the property as we can and as we need to, but it is a big city," he continued, "so it’s hard to give every single parcel and property all the attention that you’d like all at one time."