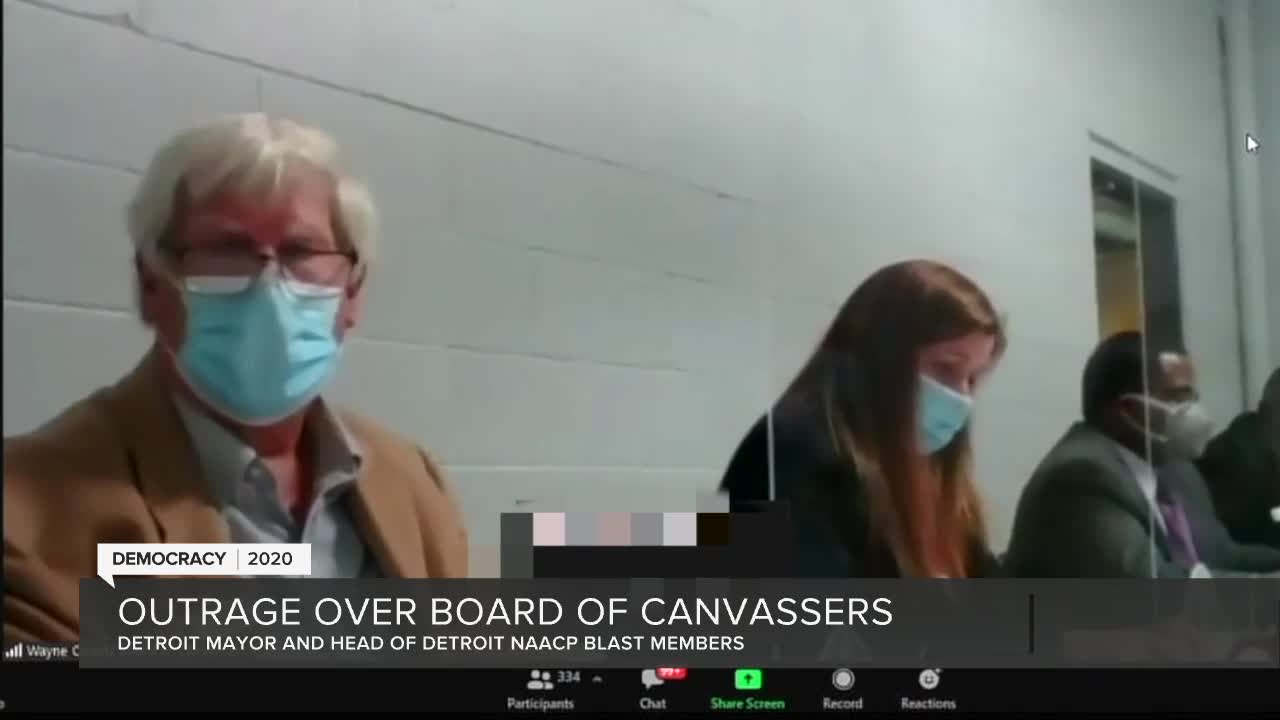 After initially being deadlocked on a vote to certify the election, The Wayne County Board of Canvassers voted unanimously to certify election results Tuesday evening. 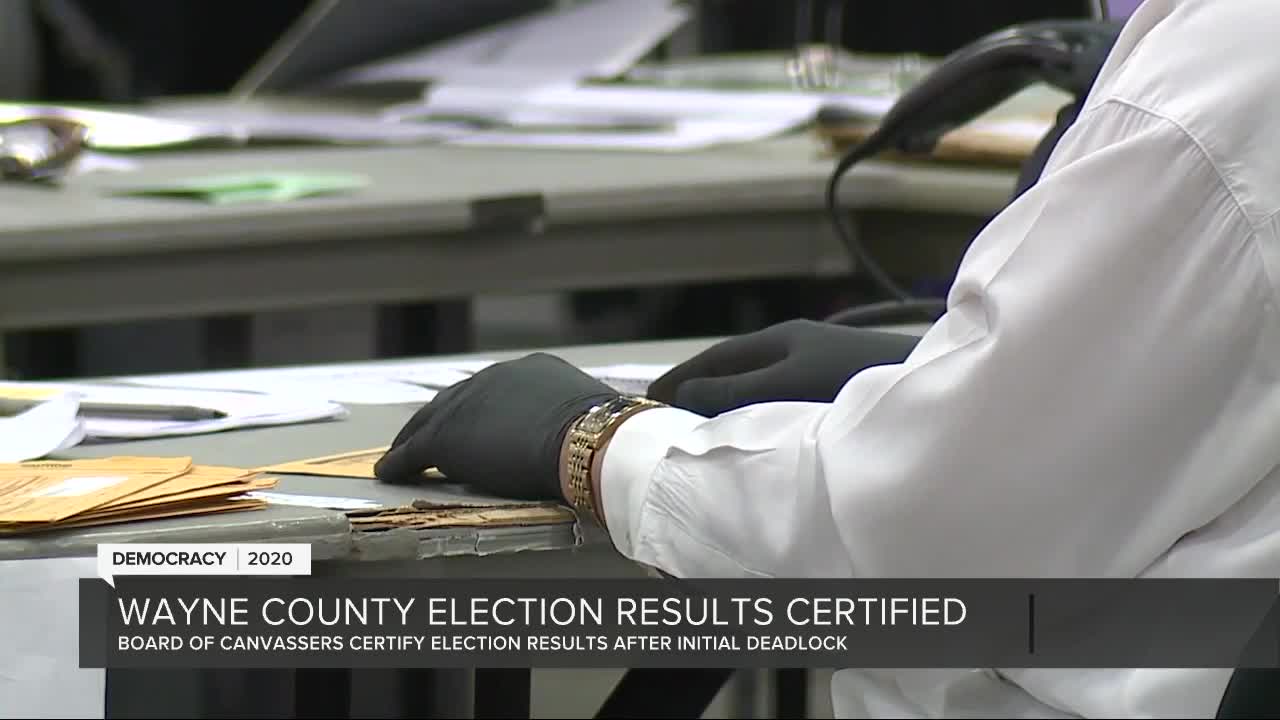 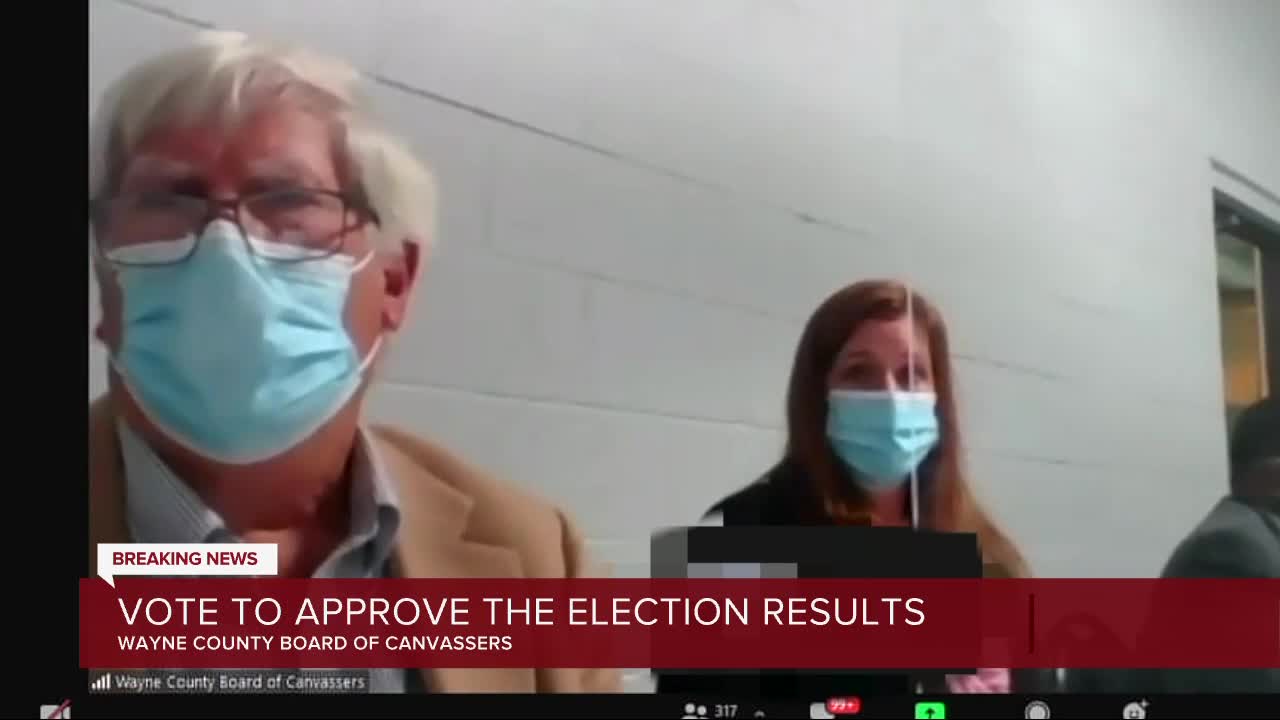 WAYNE COUNTY, Mich. (WXYZ) — After initially being deadlocked on a vote to certify the election, The Wayne County Board of Canvassers voted unanimously to certify election results Tuesday evening. The motion to hold another vote came following hours of public comments condemning Republican canvassers' decisions to vote against the certification.

The first vote tied 2 to 2 along party lines. But just before 9:30 p.m. Tuesday, the board filed a motion and voted to certify the results under the stipulation that Secretary of State Jocelyn Benson does a comprehensive audit of the election in the county.

RELATED: Claims of rampant voter fraud in Michigan don't hold up to scrutiny

Wow! Michigan just refused to certify the election results! Having courage is a beautiful thing. The USA stands proud!

Mayor Mike Duggan responding the to reversal in a statement saying, "Glad to see common sense prevailed in the end. Thank you to all those citizens who spoke up so passionately – you made the difference!"

There has been a whirlwind of unproven allegations of fraud and a string of lawsuits since the election two weeks ago. 7 Action News is told the canvassers' initial vote came after many Detroit precincts were found to be out of balance.

WAYNE COUNTY BOARD OF CANVASSERS - 2 Republican members voted not to certify the ballots- public comment is now open and it is intense. People calling board members racist. This is commenter Ned Staebler: pic.twitter.com/cEsDlxzVXT

The two Republicans on the board voted no. The two Democrats voted yes.

If the re-vote did not happen, it would be left up to the state to canvass and certify Wayne County's election results.

Secretary of State Jocelyn Benson responding to the deadlock in a tweet saying, "Should the current decision of the Board of Wayne County Canvassers hold through the adjournment of today's meeting, the Board of State Canvassers will be responsible for certifying the Wayne County election."

My statement on the actions taken during today’s meeting of the Board of Wayne County Canvassers. pic.twitter.com/Vb2TRpiLdJ

"President-elect Biden convincingly won Michigan by 14 times the margin of Donald Trump in 2016 and state election officials have made clear that there's zero evidence of fraud, despite the Trump campaign's desperate lies. The votes of all of the more than 5.5 million Michiganders who participated in the 2020 election will continue to be quickly certified and reaffirm the fact that Joe Biden decisively won Michigan."

Governor Whitmer responded to the events with the following statement:

In refusing to approve the results of the election in Wayne County, the two Republican members of the Wayne County Board of Canvassers have placed partisan politics above their legal duty to certify the election results. The people have spoken: Joe Biden won Michigan by more than 140,000 votes. Today’s action is a blatant attempt to undermine the will of the voters. The process, however, will move forward. Under Michigan law, the Board of State of Canvassers will now finish the job and I have every expectation they will certify the results when the job is done.

The head of the Michigan Republican Party Laura Cox issued the following statement about the vote;

The people of Michigan deserve to know what happened in Wayne County on Election Day and the days following. I am proud that, due to the efforts of the Michigan Republican Party, the Republican National Committee and the Trump Campaign, enough evidence of irregularities and potential voter fraud was uncovered resulting in the Wayne County Board of Canvassers refusing to certify their election results. This action will allow more time for us to get to the bottom of these deeply troubling irregularities. The people of Michigan deserve fair, open and transparent elections, and we will continue to fight for just that.

The Michigan Democratic Party condemned the vote in the following statement:

In an outrageous display of partisan posturing, the two Republicans on the Wayne County Board of Canvassers refused to certify the election results. Monica Palmer and William Hartmann have chosen to tarnish their personal legacy by picking up the GOP banner of making allegations without any evidence. For the Republican members of the Wayne County Board of Canvassers to buy into conspiracy theories and completely disregard the will of the voters in Michigan is not only shameful but a complete dereliction of duties.

It was made clear by the comments during the meeting by Palmer and Hartmann, that they have no true understanding of the task they have been charged with and zero understanding of Michigan statutes governing recounts. This action does away with a long and proud history of Wayne County Board of Canvassers acting in a truly bipartisan fashion, protecting the sanctity of the vote and instilling confidence in Wayne County residents that their votes were indeed counted and counted correctly. Which is exactly what happened this year. The actions of Palmer and Hartman disrespects and disregards the voters of Wayne County, the incredibly hard work of the dedicated poll workers and clerks of Wayne County all in the name of partisan showboating.

Before public comment concluded and the business of the meeting was done this evening, Laura Cox, Chair of the MIGOP released a statement taking credit for persuading the Republican members of the Wayne County Board of Canvassers refusing to certify the election results. This just confirms that this is nothing more than political showboating based on partisan positioning. Even during the meeting, Palmer and Hartmann conceded that their actions would not impact any results.

While bringing shame on themselves and MIGOP leadership, Palmer and Hartmann have now shown us they are willing to violate the oath they took when they were appointed to the Board of Canvassers.

The Wayne County Board of canvassers are scheduled to reconvene remotely on Nov. 18 at 1:30 p.m.