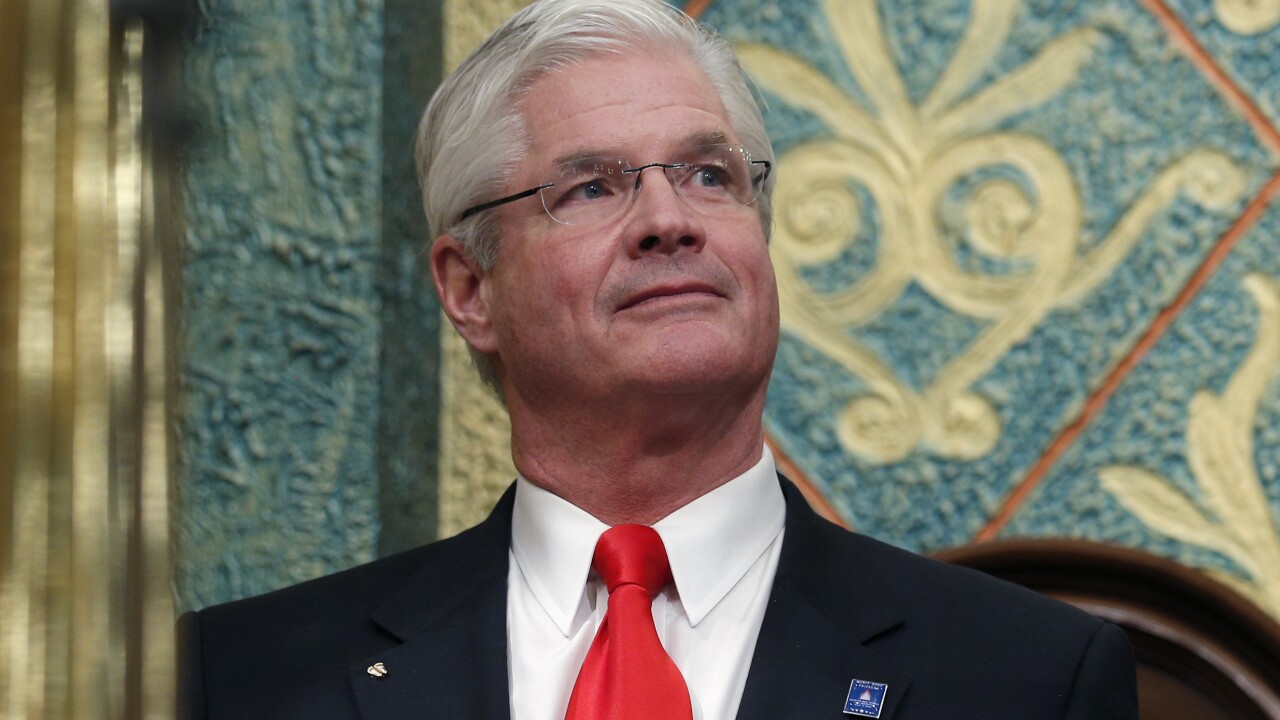 (Copyright 2020 The Associated Press. All rights reserved. This material may not be published, broadcast, rewritten or redistributed.)
Al Goldis/AP
FILE - In this Feb. 12, 2019 file photo, state Senate Majority Leader Mike Shirkey, R-Clarklake, watches during the State of the State address at the state Capitol in Lansing, Mich. Michigan lawmakers plan to convene for the first time in weeks to lengthen Gov. Gretchen Whitmer's emergency declaration amid the coronavirus pandemic but are at odds over the extension and whether the session is even necessary. The Republican-led Legislature is scheduled to meet Tuesday, April 7, 2020, three weeks after last voting. Shirkey's spokeswoman said “He thinks we can come to some middle ground in terms of the extension, and that doesn't preclude it from being extended again if were necessary at some point.” (AP Photo/Al Goldis, File)

LANSING, Mich. (AP) — A bill that would allow Michigan clerks to start processing absentee ballots before Election Day is not dead, and the August primary legitimized concerns that some officials will not be able to quickly handle a surge of mailed-in ballots during the coronavirus pandemic, a legislative leader said.

Senate Majority Leader Mike Shirkey, a Republican, said the Senate continues to “finesse” the bipartisan proposal that has been on hold in the chamber since May. It is sponsored by Republican Sen. Ruth Johnson, a former secretary of state. Similar legislation, backed by Democrats, is pending in the House.

“It wouldn't surprise me that we get enough support to do something before the general election and then evaluate it afterward,” Shirkey, who previously opposed the measure, told The Associated Press last week. Allowing clerks to begin processing, but not counting, ballots the day before the election would not necessarily be a permanent change, he said.

Temporarily revising the law, Shirkey said, would enable the state to take “controlled steps, acknowledging that things have changed but not putting the integrity of the election in jeopardy." He said he could not predict if or when the Senate would act but said it is “being very seriously considered.”

He said some jurisdictions efficiently processed an enormous number of absentee ballots while others “struggled to get it done. That represents a difference of processes and also a difference of the availability of people working at the elections. We can't deny that. I do believe that the data presented after the primary does legitimize the question.”

A record 2.5 million votes were cast in the primary, as people took advantage of no-excuse absentee voting during the pandemic. About 1.6 million ballots cast were absentee — returned by mail, at drop boxes or inside clerks' offices — topping the record of 1.3 million from November 2016.

Democratic Secretary of State Jocelyn Benson, local clerks and voting-rights groups have urged the Republican-led Legislature to let election workers start processing absentee ballots the day before Election Day. Benson has warned that the results of close races in November likely will not be known until three days later — maybe longer — without such legislation. Donald Trump's 2016 victory in battleground Michigan was razor thin.

Johnson said cities or townships with more than 25,000 residents should be able to do certain processing of absentee ballots on Monday, Nov. 2. Clerks could remove the ballot from an outer envelope but not from an inner secrecy envelope, she said. Counting could still begin at 7 a.m. on Nov. 3.

“This needs to be a priority. I believe we have the bipartisan votes to get it passed,” Johnson said. “There may be 3 million absentee ballots in November, which is double our last highest amount almost.”

She said even more important is Senate-passed legislation that would allow for shifts at absentee counting boards, so tired workers no longer have to stay so long — sometimes 20 hours or more. The bill is pending in a House panel.

“If you have to sit in one place and make sure every I is totted, every T is crossed, you can only do that for so many hours without starting to make mistakes,” Johnson said.

At least one frustrated election official said Tuesday that Gov. Gretchen Whitmer should act because legislators have not. Ingham County Clerk Barb Byrum, a Democrat, wrote a letter asking the Democratic governor to issue executive orders letting local clerks pre-process ballots 24 to 48 hours before Election Day and allowing proxy voting by military and overseas voters due to postal delays.

“The Legislature has failed to act to make the necessary changes to allow our clerks the flexibility that they so desperately need,” Byrum said in a statement. ”If unofficial election results do not come out on Election Night, I worry about the public losing faith in our democratic system.”