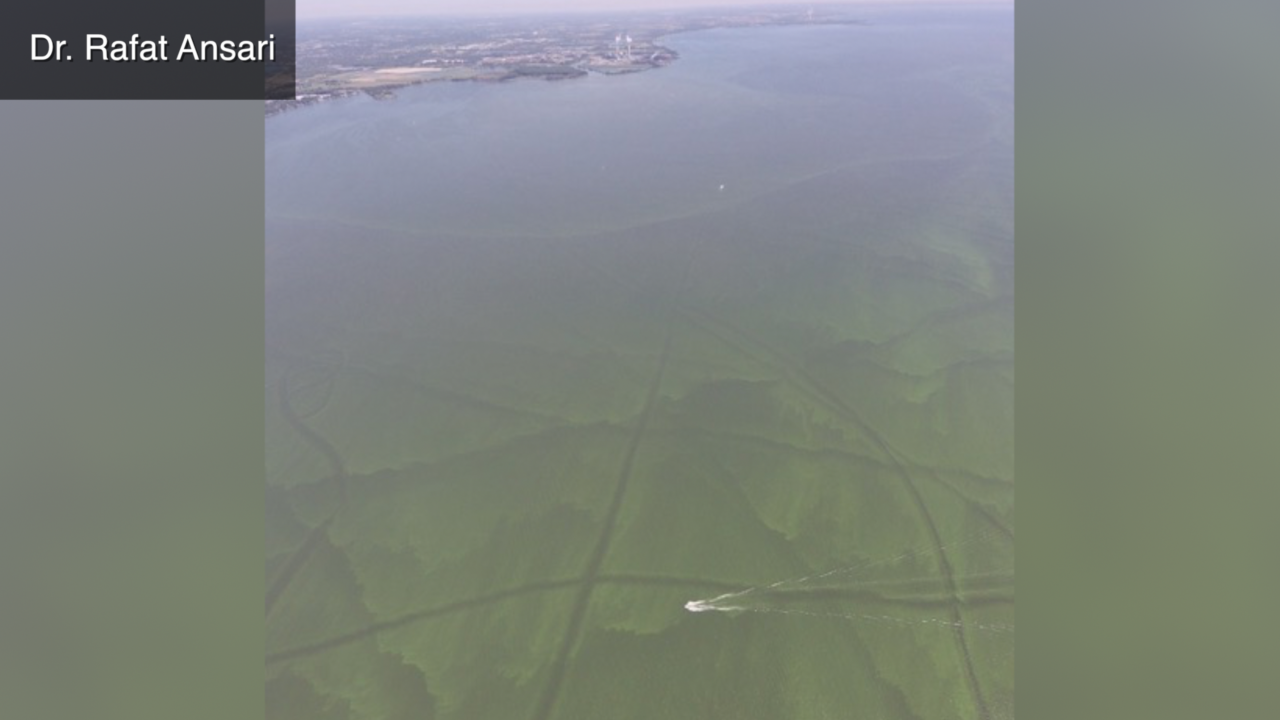 MONROE, Mich. (WXYZ) — People and their pets are being warned to avoid the harmful algae bloom (HAB) that has formed, once again, on Lake Erie. If you witness green scum from the bloom, you’re told to stay out of the water.

The bloom was visible from the air on Sunday, just two days after researchers predicted the bloom would be twice the size compared to what we saw in 2018.

The HAB, which looks like a large green floating carpet on the top of the lake, has become an annual concern because of the health risk it poses for those who drink or come in contact with the water. The latest data from scientists have measured low levels of toxins, a concern if it nears drinking water intakes for residents in Monroe, Michigan or Toledo, Ohio.

ALGAL BLOOM: The #HABs cyanobacteria bloom was visible from the air on Sunday. Photo was between Monroe and Toledo on #LakeErie. Image Credit: Rafat Ansari. NOAA / @CopernicusEU satellite from Sunday as well (via HABs bulletin. pic.twitter.com/SqtPf0PVAY

The latest report indicates that this year’s bloom currently stretches from parts of Monroe County all the way south into the Maumee Bay area, just north of Toledo.

Don Scavia, a University of Michigan aquatic ecologist, said that people, the ecosystem and the economy are being threatened by the bloom in response to Friday’s news that the bloom is expected to be twice the size of last year’s.

“Even so, we cannot continue to cross our fingers and hope that drier weather will keep us safe,” Scavia said. “These blooms are driven by diffuse phosphorus sources from the agriculturally dominated Maumee River watershed. Until the phosphorus inputs are reduced significantly and consistently so that only the mildest blooms occur, the people, the ecosystem and the economy of this region are being threatened.”

Blooms have been studied more, and more, in recent years. University of Michigan researchers were part of a team that released a forecast last week. They expect this year’s bloom to measure a 7.5 on the severity index, anything above a 5 indicates a greater impact. That forecast leaves the potential that the area will see it’s most severe HAB since 2015, when a state of emergency was issued in Ohio as several counties water supply turned toxic including Monroe County in Michigan.

Nearly 11 million people rely on Lake Erie for drinking water. Drinking water contaminated by a harmful algal bloom, can lead to severe diarrhea an vomiting, liver/kidney toxicity and difficulty breathing. Simply coming in contact with the water can lead to rashes, hives and skin blisters.