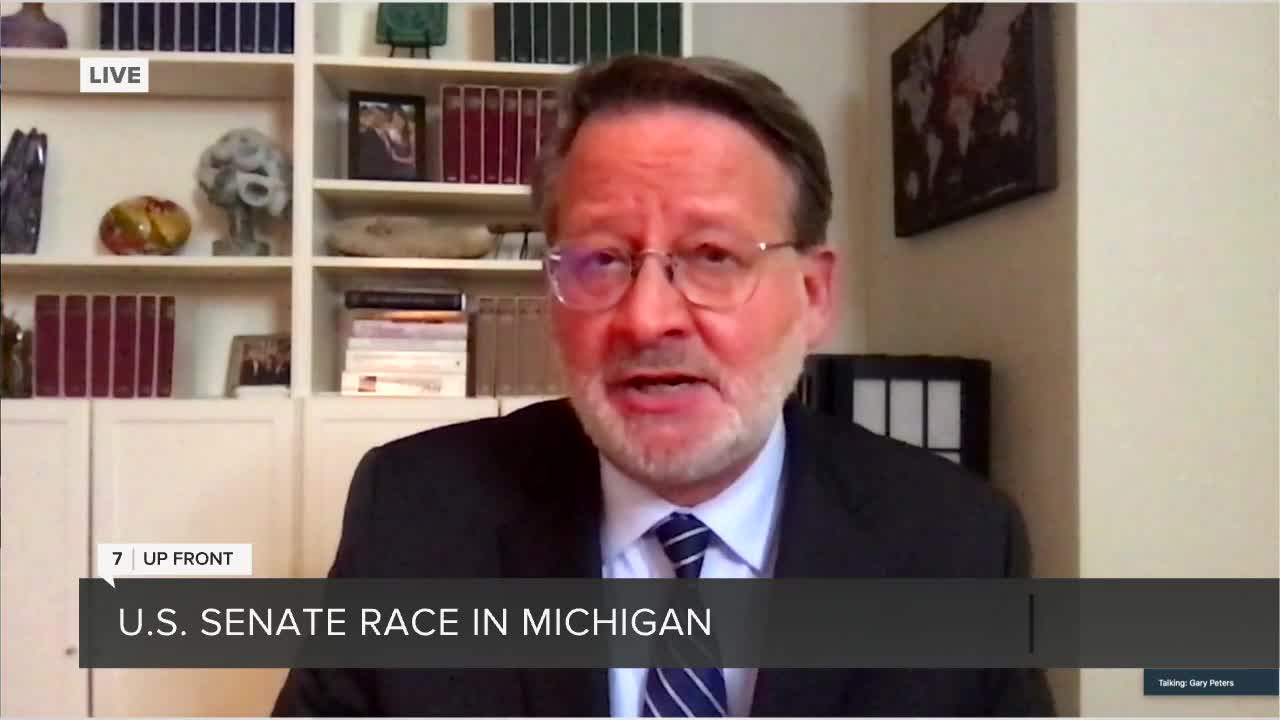 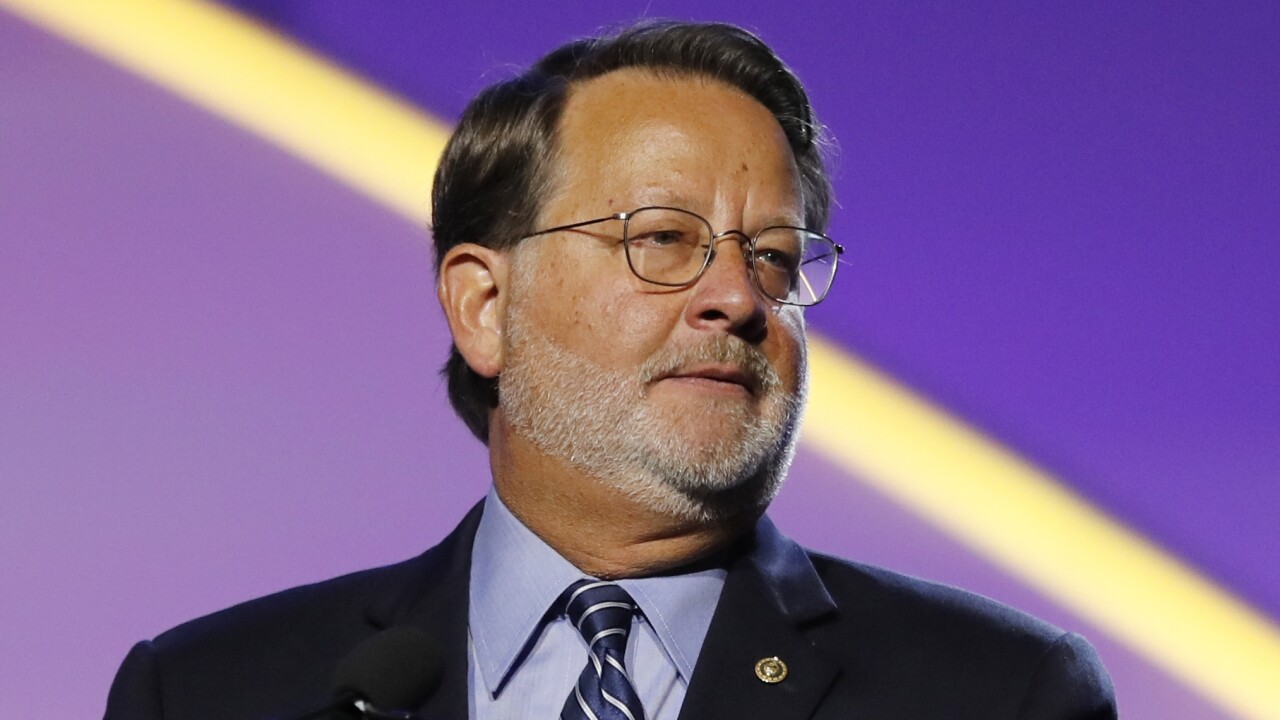 7 UpFront: GOP candidate for US Senate, John James, discusses his platform ahead of Election Day

Polls have shown Peters in a tight race with challenger John James.

"You have polls all over the place right now and, basically, I don't really follow polls. This is just about moving my campaign forward, focusing on the issues that matter to folks here in Michigan," Peters says. "To me, what folks in Michigan care about are not polls, they care about issues that they talk about every night at the kitchen table, getting a fair wage for a job, making sure their children have good education, having quality, affordable health care, and, when it's all said and done, being able to retire with dignity, those are the issues people care about and what they want to hear from us as candidates, they want to hear our ideas, the work we're doing, and, certainly want to be focused on that and not on whatever the poll is on any given day."

However, there are some undecideds still out there, based on poll responses. Here's how Peters says he will reach them.

"It's about continuing to talk about the message, you know voters have busy lives, they're focused on their everyday challenges and over the next few weeks people will be taking a look at the candidates and, so, I will continue to talk about my record of getting things done, as being ranked as one of the most effective United States Senators in getting legislation passed through the Senate, and I'm a first termer, I'm a new guy, I'm in my first term, and in the last term the Center for Effective Lawmakers, a group out of the University of Virginia and Vanderbilt, actually ranks every member of Congress and the Senate as to how effective they are, and I was ranked the 4th move effective Democratic Senator in the last session and if you look at what I've done over just the last two years, here I am, I'm the junior member and I'm in the minority party and, yet, I've actually written and passed more bills through the United States Senate over these last two years than any other Democratic Senator or any Republican Senator, more than anybody else there," Peters says. "And I focus on issues that matter to folks here in Michigan, legislation to help veterans, for example, transitioning out of the military to get into apprenticeship programs, get the skilled training that they need, legislation to help make sure our Great Lakes are taken care of and we keep them clean for future generations, making sure prescription drugs prices are lower, they're way too high, we need to deal with it. Those are the kind of things that I work on and, certainly, I'm going to continue to talk about how I'm going to defend the Affordable Care Act and making sure that everybody in this state, regardless of who they are or where they live, have access to quality, affordable health care and, quite frankly, that is definitely on the ballot this year, there's no question about it, particularly with a Supreme Court nominee now before the Senate who is saying that she will likely overturn that and that's why it's absolutely critical that folks are electing people who will continue to defend the right of health care for every American and everybody here in Michigan."

When asked about voting in the Senate for the Amy Coney Barrett nomination, Peters says a vote should not be held.

"This shouldn't even go forward. We should not be taking up a Supreme Court nominee this close to an election," Peters says. "In fact, we shouldn't this close to an election. We are in an election. Already, I believe, roughly 1.7 million Michiganders have already cast their ballot. We should wait until a new president is decided, and a new Senate. What we should be doing right now is focusing on the COVID crisis. As I travel across the state of Michigan, it is the central focus. Folks want to get through this pandemic. We have got to deal with the health care aspects of it, we have to deal with the economic aspects of it, and as a result of mismanagement that we have seen from the Trump administration, we're still dealing with this and we need to be focused on how do we get to the other side, and that's why we should be taking up an additional COVID relief package, you know, in terms of helping get folks through this crisis. In fact, the CARES package that passed, which was a bipartisan effort, and I hope that we can come together and do this in a bipartisan way and help folks that are unemployed through no fault of their own to help them keep food on the table and a roof over their head and our small businesses need help to make sure they can get through it. You know, I'm happy to say that I was able to help in the CARES act. In fact, the Pandemic Assistance Act, Unemployment Assistance Act, which expanded eligibility for folks to get unemployment insurance because of them being unemployed as a result of the pandemic, was expanded with legislation that I wrote, and that was actually incorporated in the CARES Act. So small business owners who suddenly found that their business had disappeared, they normally wouldn't qualify for unemployment, were able to get it to be able to keep the flow. Folks who are Uber drivers, independent contractors, those folks were able to get assistance, and that meant hundreds of thousands of people in Michigan were able to get through really tough times but must continue to get help and that's the type of thing we should be focusing on right now. A Supreme Court nominee can wait. In fact, it should. We've never confirmed a Supreme Court nominee past July of an election year in the entire history of this country. Only one justice was there an opening in a shorter period than Justice Ginsberg when she passed and that happened when Abraham Lincoln was the president. And Abraham Lincoln said he did not want to delegitimize the court by pushing through a nominee 30 days before an election. Of course, Abraham Lincoln was an amazing and great statesperson. We should follow the precedent of this country, wait until after the election and focus on making sure people have the relief they need to get through this COVID crisis."

Peters also spoke about the lack of debates in this race with John James.

"I agreed to two debates back in July. It was a long time ago," Peters says. "I said we definitely should have debates, I agree to those two debates. They're basically the two debates that were done when Mr. James ran last time. When he lost two years ago he had two debates with Senator Stabenow, out on the west side and in the Detroit area through public broadcasting that was picked up by outlets all across the state of Michigan, it's the same format that was used then, and, in fact, it's the same format that Senate campaigns have used since the 1990s, so this is what we have always done. I agreed to it immediately. We don't hear anything from Mr. James, except he wants to debate debates because I don't think he wants to debate. Bottom line, he has not shown any command of issues or substance. I suspect he's trying to make this a debate about debates. Instead, his billionaire buddies and his own campaign are putting false negative ads against me. You're right, I mean massive ads the fact-checkers out there, the independent fact-checkers, PolitiFact and others have basically said all of Mr. James' ads that they're running against me are either false, they're demonstrably false, they're smears, they're misrepresentations, but that's basically the basis of Mr. James' campaign."

Peters says he's not going to change how he does his job.

"I go about my job being effective. I would hope that folks here in Michigan want someone who rolls up their sleeves, goes to work every day, is ranked as one of the most effective in getting things done in the Senate, and has passed more bills through the Senate than any other Senator over the last two years, getting things done," Peters says. "You know, that's why I got into politics and public service because I wanted to make a difference, I wanted to really dig into public policy and understand the really tough challenges that we face as a state and as a country. Now I know that there are politicians that love to get on TV and they're in it to get TV exposure. That's not why I got into this job. I got into this job to solve problems for people, to help us move this country forward, and to bridge the divides that I see between folks and parties, that's why I'm ranked as one of the most bipartisan Senators as well. The reason I'm effective in actually getting legislation done when people want Congress to get things done, I'm the guy that's getting things done and I'm doing it in a bipartisan way. I'm ranked as one of the most bipartisan Senators. I'm a Democrat, proud to be a Democrat, but I believe that we can find common ground and work together. In fact, the US Chamber of Commerce, which as you know is not a Democratic organization in any respect, they just awarded me their inaugural Jefferson-Hamilton Award for bipartisanship. I think one of the biggest challenges we face as a country right now hyperpartisanship and, plus, these negative, nasty campaigns like we're seeing from Mr. James. You know, I think those represent the worst of politics. Instead, we should be coming together and bridging some of our divides so that we can govern and that's what I'm committed too and I think the people of Michigan want someone who is committed to getting things done and I have a record to prove that."