Bailouts went to Michigan hospitals with billions in reserves 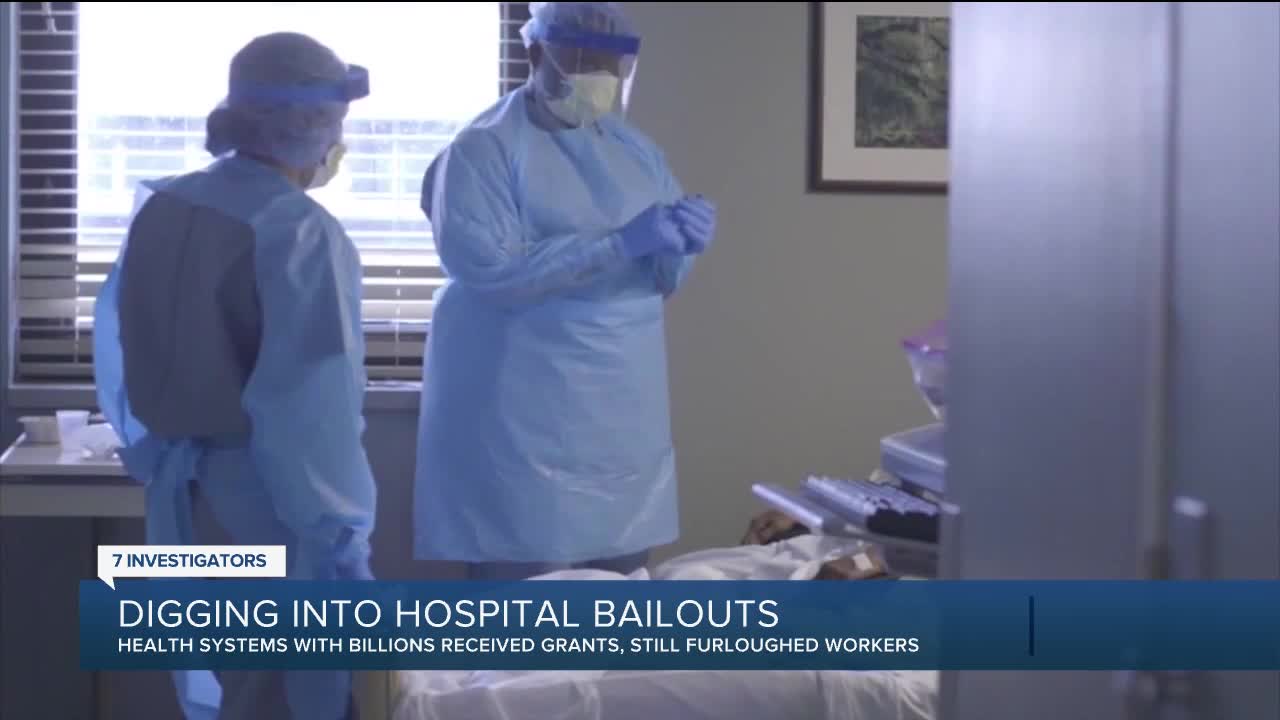 Hospitals with billions in reserves still received hundreds of millions of dollars through taxpayer bailouts.

(WXYZ) — As health system budgets continue to recover from deep losses caused by the COVID-19 pandemic, questions are being raised about why hospitals with billions in reserves still received hundreds of millions of dollars through taxpayer bailouts.

As part of the CARES Act in April, the federal government infused billions of dollars into the economy, with much of the money going to hospitals across the country.

“The CARES Act basically said hospitals had to apply for money and had to demonstrate need,” said Robert Berenson, a fellow at the Urban Institute. “That was completely ignored under the pressure to get the money out the door.”

According to the health systems’ most recent quarterly financial filings, each had billions in cash and investment reserves.

At the end of March, Beaumont reported $2.05 billion in cash and investments, McLaren had $2.18 billion and Henry Ford had $2.25 billion.

Spectrum Health, based in Grand Rapids, reported the most: $4.2 billion in cash and investments — enough to run the health system for 246 days.

Berenson, who studies healthcare costs, said the vast revenues should have been utilized, at least in part, to offset costs that were shouldered by taxpayers.

“What’s the purpose for not-for-profit hospitals to have large surpluses, other than for this kind of an emergency?” he said.

Without question, all of the hospitals saw significant losses in revenue due to elective procedures being canceled and increased expenses in security scarce personal protective equipment.

Each of the health systems stresses that while they appreciate the federal grants, they will not cover all of their losses.

"It was critical for us to be able to pay payroll, buy pharmaceuticals, pay our utility bills," Damschroder said. "If we didn’t have those accelerated loans, we would have been going out on our credit lines very, very quickly in an effort to keep everything moving."

Damschroder estimated the hospital will have lost $500 million due to the pandemic, and is bracing for a second wave to slash revenues further.

“We’re anticipating a wave two. We are unclear given the amount of money that’s been given out today whether there will be more money,” Damschroder said. “So if the second wave were as big as the first, or half of the first, you can imagine that Henry Ford is going to have to look to those reserves then.”

Grants to hospitals weren’t based on need, but rather on past revenues. It prioritized large health providers first, and smaller, more rural hospitals last.

North Ottawa Community Health System in Grand Haven, a small hospital with under 500 employees, was struggling well before the pandemic and was late to receive any federal funds after it took hold.

“It has shown the light about the inequities of hospital funding,” said Jennifer VanSkiver, chief communications officer for the health system.

In total, the health system received $1.2 million through the CARES Act, not enough to offset $5.7 million in losses.

“With smaller hospitals,” VanSkiver said, “you don’t typically have huge cash reserves or the ability to forever rely on investment income.”

Niall Brennan, the CEO of the Healthcare Cost Institute in Washington, doesn’t blameMichigan hospitals for accepting the federal funds because they all lost significant revenues. Back in April, he said, no one knew if the surge of Covid-19 patients would last weeks or months.

But where he does fault hospitals is for accepting federal funds and still furloughing or laying off employees. Beaumont furloughed nearly 2,500. Henry Ford furloughed 2,800.

McLaren and Spectrum also furloughed employees, but the final numbers were not publicized. Both released statements to 7 Action News.

"McLaren has taken decisive action to stabilize its operations and protect its financial strength during the pandemic," said spokesman Kevin Tompkins in an e-mail.

"We’ve focused our resources, reduced expenses and boosted our liquidity to ensure we have adequate cash on hand to support normal operations and the increase in COVID-19-related cash obligations that will extend well into 2021. Unfortunately, this pandemic is far from over," he said.

"The financial impact of COVID-19 is far-reaching and will suppress our health system’s revenues for the remainder of the year, which will end in a loss," said Spectrum Health spokesman Bruce Rossman. "This makes financial adjustments imperative. The most difficult adjustment involved the furloughing of team members and the elimination of positions that would not be needed in the future. These were roles that did not involve direct patient care."

Beaumont did not release a statement to 7 Action News.

“Maybe a CFO can look at the bottom line and say look, we’re not utilizing these people and therefore they need to be furloughed,” Brennan said. “But this was an extraordinary time for our country, and if an organization could afford to keep their workers paid, I think they should have made every effort to do so.”

Each of the hospitals said furloughs were necessary to ensure they’d survive longer than just the next year. Most furloughed employees have returned to the workforce.