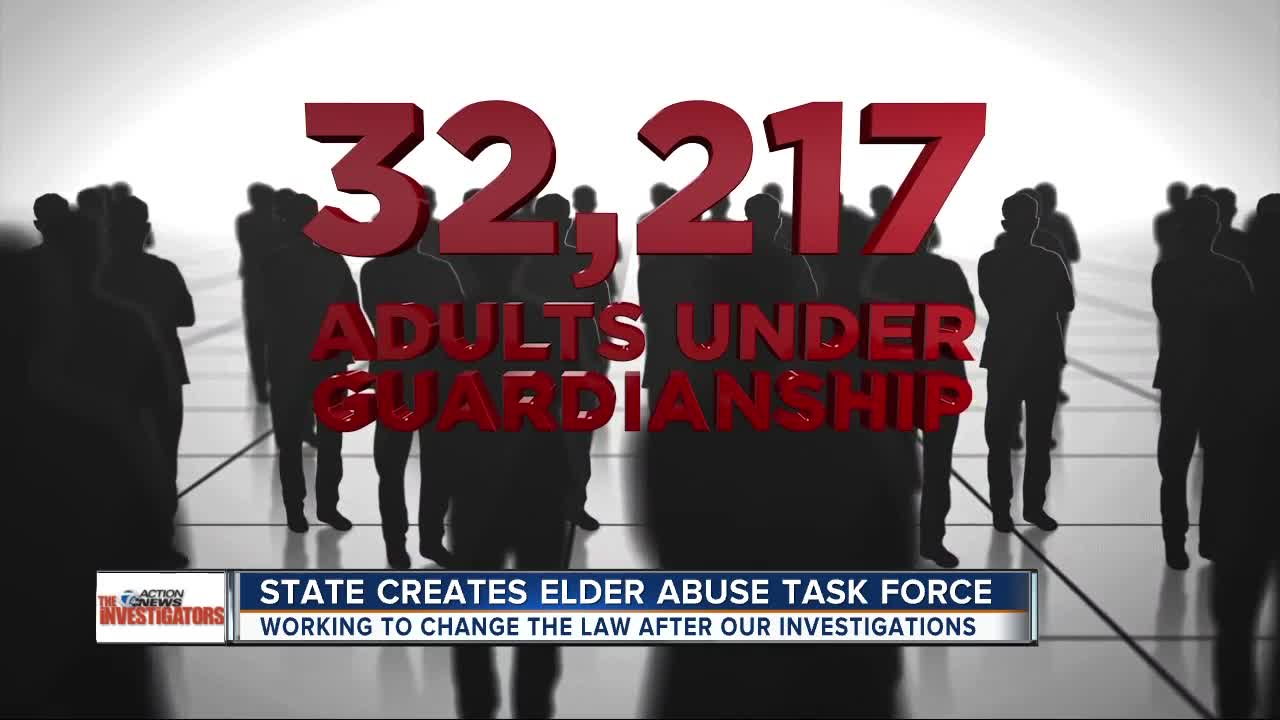 Adult children separated from their ailing parents. Vulnerable adults being put into unlicensed group homes. Those are just a few of the guardianship problems 7 Investigator Heather Catallo has been exposing since 2017.

LANSING, Mich. (WXYZ) — Adult children separated from their ailing parents. Vulnerable adults being put into unlicensed group homes. Those are just a few of the guardianship problems 7 Investigator Heather Catallo has been exposing since 2017.

For years, families in metro Detroit have been telling the 7 Investigators that guardians and conservators appointed by judges have devastated their families.

“I had watched those stories and I really struggled to understand how this could happen in our modern society,” Attorney General Dana Nessel told 7 Investigator Heather Catallo in an exclusive interview. “Your series of stories really helped to enlighten people… The problem is even greater than I thought.”

“As an attorney I’m just horrified," Nessel said. "I see cases, frankly, where there are civil infractions for traffic tickets where there is more time and energy and effort put in by the attorneys and by the judge and by the witnesses than there is when you have a person made a full guardian of another human being. And that’s atrocious."

“You could go out this afternoon, have business cards printed up, stick up a sign and you’re a professional guardian," said Teter, who is the director of the attorney general’s Financial Crimes Division and project leader for the Elder Abuse Task Force. "That’s just insane that we would have a system where we would use the power of the court and put somebody else’s entire life under your control with zero training, zero qualifications, zero monitoring.”

In Michigan, 32,137 adults are under guardianship, which means someone else is making all of their medical and legal decisions for them. Conservators are also appointed frequently, and they control all of your finances.

“This is not a system designed to help; this is prison,” said Niki Disner in 2017 when the 7 Investigators interviewed her about the years of her life that were controlled by a court-appointed guardian.

The 7 Investigators have showed you case after case where family members say professional guardians have prevented them from seeing their loved ones.

Most recently, Marcie Mitchell and her family members were prevented by the guardian from visiting her ailing dad and step-mom in Utica. That guardian has since withdrawn from the case, and Mitchell is fighting to become the appointed guardian.

Now, the Task Force wants to change the law so visitation will be allowed.

Certification for guardians, basic rights for families of wards, and more accountability on the finances. Those are just a few of the things @MIAttyGen and @MISupremeCourt and the #elderabuse task force want changed in Michigan. Join us tonight at 6pm on @wxyzdetroit pic.twitter.com/ygtSNOafFn

“Making certain that if an adult child is not made the guardian, if there is a guardian put in place that there is a damn good reason for that," Nessel said. "And that the judge has to explain that in full. So even if the court deems that adult child not the appropriate person, not the best person to be a formal guardian for their parent, it doesn’t mean they should never see their parent ever again.”

Teter says the task force is also making a list of basic rights for family members.

“We’ve put together a list that we’re working on to make sure that they have not only the opportunity to challenge visitation, but the opportunity to present their information as to why they should be a guardian or a co-guardian," Teter said. "And the right to notice of the hearings, the right to see a copy of the Guardian ad Litem recommendations before we get to court – all of those things. And then that would be a separate notice available at the court so that when you come in, they hand you a list that says these are your rights in the system."

The task force also wants to require testimony from doctors in court prior to a guardianship being granted.

“I think medical testimony should be mandatory," Nessel said. "If you’re going to make an assessment that an individual can no longer care for themselves and has to have somebody there making their medical decisions and their financial decisions for them, you ought to have a medical professional who’s going to attest to that. And not just an attorney who says, ‘well, I went and I spoke to this person for five minutes and it seemed like they weren’t really capable of understanding what I said to them.’ That’s astonishing to me."

The 7 Investigators also exposed how some local courts use attorney general-appointed public administrators, whose job is to open estates after someone dies, as guardians.

“If we are able to corroborate information that these public administrators are not acting properly, I have no problem terminating their service,” Nessel said.

RELATED: 'I just want my parents back.' Woman says company imprisoned her parents in their own home

“We don’t supervise the guardianship side, that’s the courts responsibility," Teter said. "But we have repeatedly run into judges who use the language: ‘I’m appointing John Smith, the public administrator.’ And I assume that’s to lend some added credibility to that appointment, when they know that that’s absolutely legally incorrect."

“If the adult guardianship system is failing our moms and dads, we have to fix that,” said Chief Justice McCormack in a written release when the task force was announced in March. “That’s why I have asked Justice Bernstein and Justice Cavanagh to take the lead on this task force with Attorney General Nessel.”

Chief Justice McCormack also recognized investigation efforts by the media in this statement:

“The Court appreciates the work that the media have done to highlight families who have concerns regarding the guardianship system. Justices Cavanagh and Bernstein are actively involved in the Task Force, traveling the state, listening to families tell their stories. These families come to probate court at the most difficult times in their lives. They deserve a system that protects their rights, follows the law, and safeguards vulnerable residents. By listening to the public and working together, the Task Force is on the right track to make sure the system works for all our moms and dads.”