State of MI to Macomb Co. mother at center of FBI probe: Stop working on adoptions 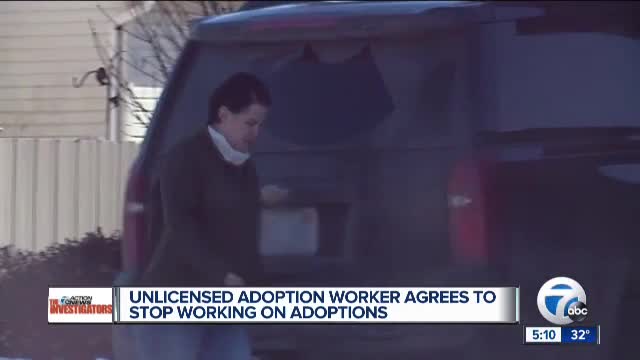 The 7 Investigators were the first to tell you that a Macomb County mother is charged with federal wire fraud, and now she squares off with the state of Michigan in court on Monday for working as an unlicensed adoption worker.

MACOMB COUNTY, Mich. (WXYZ) — The 7 Investigators were the first to tell you that a Macomb County mother is charged with federal wire fraud, and now she squares off with the state of Michigan in court on Monday for working as an unlicensed adoption worker.

On Friday, 37-year-old Tara Lynn Lee of New Haven had to turn herself in to the FBI to face a charge of wire fraud. If she’s convicted, she could face up to 20 years in federal prison.

Monday’s hearing in Macomb County Circuit Court is related to the allegations described in the FBI’s case, but now the state is trying shut Tara Lee down and prevent her from working on any adoptions.

Lee promotes herself online as an “adoption worker,” but the Michigan Department of Health and Human Services is seeking an injunction against Lee; they want her to stop operating as “an unlicensed child placing agency.”

Lee has been under investigation for months. The FBI raided her house back in November, and families across the U.S. have been calling the 7 Investigators with stories of heartbreak and financial ruin after failed adoptions.

“It’s heartbreaking, because I’m surrounded by all this baby stuff and it doesn’t have an owner,” Stacey Markley from Ohio told the 7 Investigators back in December.

FBI agents say Lee was charging couples like the Markley’s between $10,000 and $33,000 when they “matched” with an alleged expectant mother.

The state started receiving complaints about Lee back in 2015. At the time, MDHHS investigators determined Lee was providing adoption services without a license and she was told to stop or get a license.

The state got another complaint in 2018 after Lee arranged an adoption with a birth mother from Detroit and a couple in Wisconsin.

State officials say Lee is in violation of the criminal provisions Child Care Organizations Act. Lee denies that, and her attorney Sanford Schulman says her work as an “adoption coach” does not require a license.

Schulman says despite the allegations against her, “Lee was in the delivery room for over 100 births, often serving as the only support for the delivering mom.”

Contracts obtained by the 7 Investigators show Lee charging adoptive couples thousands of dollars and describing her business as a “licensed counseling and adoption education center.”

According to the FBI, Lee used a fake diploma from Northwestern University. The 7 Investigators have seen a photo of the diploma that indicates Lee received a Masters of Social Work from Northwestern University’s School of Business in June 2016. A spokesman for Northwestern confirms their School of Business does not offer an MSW, their diplomas do not look like the one with Lee’s name on it, and they have no record of Tara Lee ever attending the university.

Schulman says Lee ran Always Hope Pregnancy Services as a 501c3 for five years, and in that time frame, “Ms. Lee has helped merge over 130 babies into perfect adoption settings, with over half being open adoptions… Ms. Lee has allowed hopeful adoptive families stay in her home while awaiting ICPC (Interstate Compact on the Placement of Children), and has even had expectant mothers and their children live with her when they were homeless and had no where to go.”

MDDHS has a different view: in their complaint filed in Macomb County Circuit Court, they say Lee “poses a threat to the health, safety and welfare of the children and families who receive matching and adoption services from Defendant.”