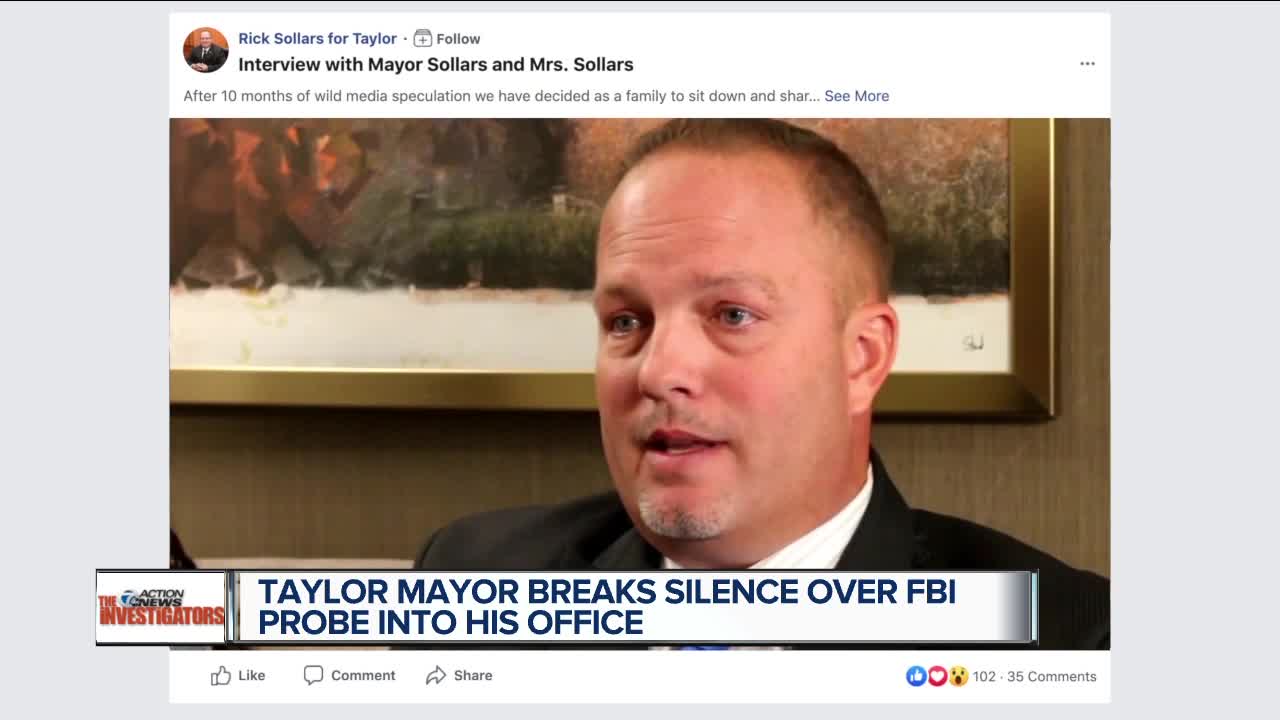 In a lengthy video posted to his campaign’s Facebook page, Taylor Mayor Rick Sollars says he’s an innocent man whose life has been turned upside down by the FBI.

TAYLOR, Mich. (WXYZ) — In a lengthy video posted to his campaign’s Facebook page, Taylor Mayor Rick Sollars says he’s an innocent man whose life has been turned upside down by the FBI.

"They've essentially paralyzed us," Sollars said. "After working our entire life to try to be prepared for adult life, they now have us living paycheck to paycheck."

Monday morning, Sollars posted the 20-minute video, which mimicked a TV news story. It was narrated by former WDIV reporter Kevin Dietz, who Sollars’ attorney Todd Flood says was compensated for producing the video. He said he was unfamiliar with the terms of the deal, and said either Sollars or his campaign would pay for the video. Dietz declined comment.

It is the first time Sollars has offered an explanation for the FBI raids of his home and office last February. To date, he has been charged with nothing.

The feds have not publicly said what they’re investigating in Taylor. Media reports have said the FBI is looking into a housing rehabilitation program as well as trash and towing contracts with the city, including a no-bid deal that went to Rizzo Environmental Services, whose former CEO is currently in prison for bribery.

“Did anyone from Rizzo try and bribe you,” Dietz asked.

“Did anyone from Rizzo ever give you gifts,” Dietz asked.

Sollars also denied an allegation made by tower Shane Anders, who said Taylor’s mayor threatened to pull his city contract if he didn’t use tower Gasper Fiore for heavy-duty tows.

“I am extremely confident that that will come out and a complete exoneration will occur,” Sollars said. “Because that simply did not happen.”

For the first time, Sollars offered an explanation for the $200,000 that the feds seized at Sollars’ home. He says the money was all gambling winnings, not bribes.

“When you win in Las Vegas, they don’t—unless you win a million bucks—they don’t say let me cut you a check. They bring you cash,” he said. “They bring you stacks of, whether it’s 5 or 10 thousand dollars.”

Sollars says the federal investigation has financially ruined his family.

“I’m paying for my own attorneys, not the city of Taylor,” he said. “So this will cost me my entire life savings to defend my name, for a job that all I wanted to do was make a difference.”

Sollars also responded to questions over use of his campaign funds.

Earlier this year, 7 Action News reported how the Mayor used nearly $10,000 to spend on his own clothing, shoes and dry cleaning , as well as a loaded Chevrolet Suburban he leased for $1,000 a month that he admits to using for personal and family trips.

“If it was an inappropriate expense, we will refund the campaign. I’ll own it,” Sollars said. “I will pay whatever fines are associated with it and we’ll move on and learn from it.”

Former WDIV reporter Kevin Dietz, who was paid to produce the video, declined to answer questions about how much he was paid and if he had editorial control over the video.

Sollars' attorney Todd Flood says no city dollars were used to produce the video. Dietz will either be paid out of Sollars’ campaign fund or out of his pocket.